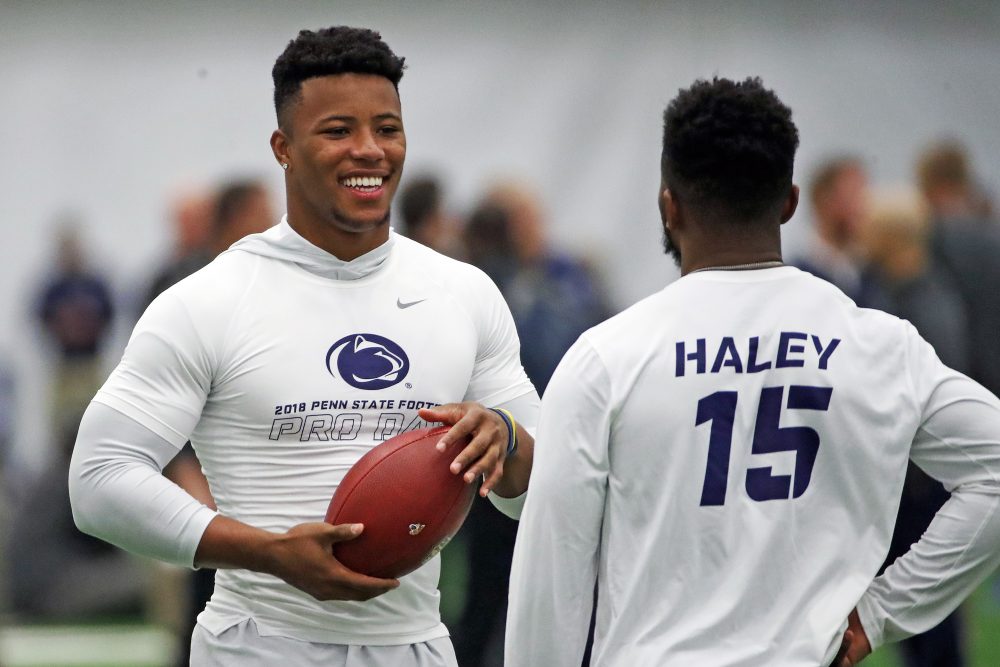 They are considered the top contenders, along with Ohio State cornerback Denzel Ward, if the Browns keep the pick and draft at No. 4 on April 26.

“They’re great kids. All three of them are awesome kids,” general manager John Dorsey said Thursday. “What more do you need to know about them? I’ve talked to each one of them on the side at the combine. I know what they are as people.

“Why waste a 30 player visit? If there’s guys you have questions about, why not bring those guys in here?”

The Browns are expected to use the No. 1 pick on a quarterback and used five of the visits on the position: USC’s Sam Darnold, Wyoming’s Josh Allen, UCLA’s Josh Rosen, Oklahoma’s Baker Mayfield and Louisville’s Lamar Jackson.

The Browns drafted defensive end Myles Garrett with the No. 1 pick last year. Would that preclude them from taking Chubb at No. 1 or, more likely, No. 4?

“I don’t think necessarily,” Dorsey said. “You listen to how teams are built and who is on your team and then you begin to look at those types of players, the impact they can have on your team.

“Now, the guy from North Carolina State is a really good football player and I continually say you can’t have enough of these good football players on your team. If it so happens that he becomes a member of the organization, I’d be thrilled to have a guy like that. Because he fits all the models we talk about. He’s a good football player, he’s a man of character and he’d be great in the locker room. Really, he’s a super kid.”

The Browns hold two of the first three picks of the second round, Nos. 33 and 35. They could be used individually or together to trade back into the first round.

Dorsey said he’d be reluctant to give up the first pick of Friday — teams are often interested in trading for it — but would if he got the right offer.

“I like having the first pick of Day 2, I do like that,” he said. “But that’s not to say that I wouldn’t try to package something together. If I felt I could go up and get a player that would help this team, I would package it up and move and go get that player.”

Dorsey explained the decision to sign veteran quarterback Drew Stanton to a two-year, $6.5 million contract. He will back up Tyrod Taylor, who was acquired in a trade to be the starter.

“I’ve always thought the second quarterback is the guy who’s got a little bit of veteran presence with him,” Dorsey said. “That No. 2 guy is invaluable to the starter when they start game-planning on Monday, Tuesday and Wednesday and get ready for games. And then also, if in fact we had to go the young guy route, he will be that bridge to kind of teach him how to be a professional, because there’s only one way that young man’s going to learn how to be a professional in this game is by true professionals.”

ON THE DOTTED LINE

Meder, who went to Valley Forge High School, has appeared in 43 games with 16 starts since joining the Browns in 2014. He has 95 tackles and two sacks. He had 13 tackles in 10 games last season before an ankle injury ended his season.