NFL Draft: Baker Mayfield gets emotional after going from 2-time walk-on to No. 1 pick 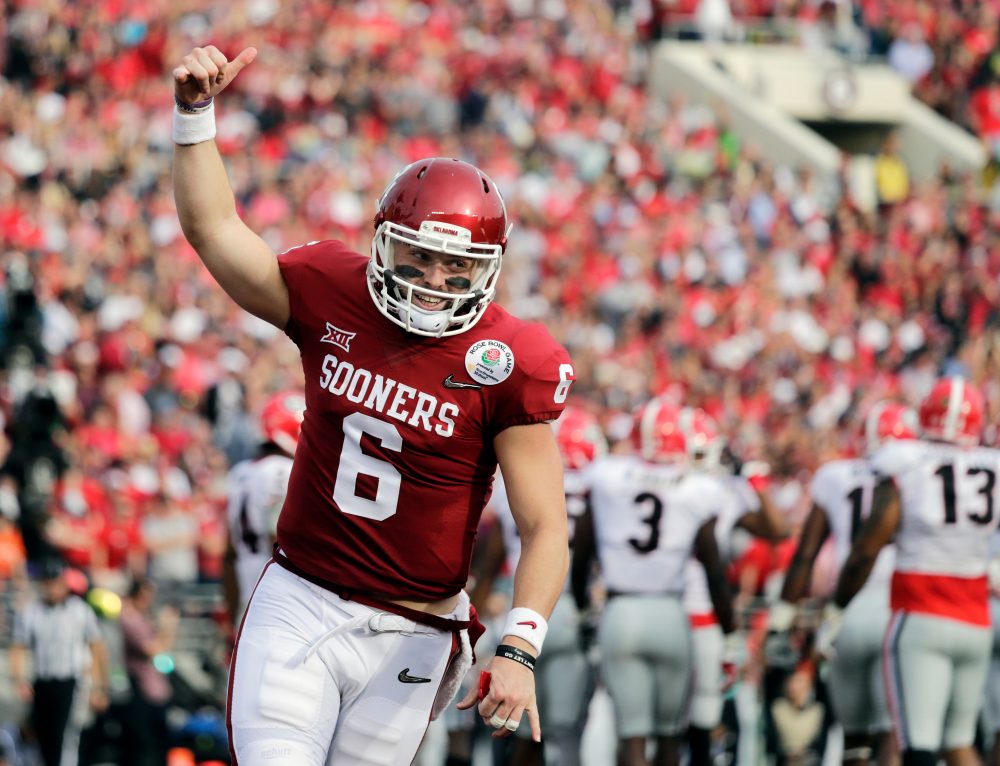 BEREA — Baker Mayfield got the call he’d been waiting for. The one he thought was possible but not many others did.

When it came, he was overcome with emotion.

General manager John Dorsey showed guts and the courage of his convictions in his first draft with the Browns by making the Oklahoma quarterback the No. 1 pick. Before he officially stunned the league, Dorsey called Mayfield at his home in Austin, Texas, surrounded by family and friends.

“It’s an unbelievable feeling, a surreal feeling,” Mayfield said Thursday night on a conference call. “Coming from my story, it’s something I only could have dreamed of, and it actually being a reality, it’s amazing.

“It just kind of brought out all of the emotions of the tough times that we went through and the good ones. It was a whole lot of emotion packed into one phone call.”

“Hey — let me ask you a question … you want to be the first pick in the draft?” pic.twitter.com/Ll6z5UiVej

The undersized overachiever is no longer an underdog. He’s the headliner of the NFL Draft.

The selection of the Heisman Trophy winner ended months of anticipation, weeks of speculation and hours of disbelief — once the pick of Mayfield became likely.

Dorsey chose Mayfield over USC’s Sam Darnold, UCLA’s Josh Rosen and Wyoming’s Josh Allen — the other quarterbacks considered. It was a stunner, as Darnold was the favorite throughout the process.

The Giants took Penn State running back Saquon Barkley at No. 2, and the Jets pounced on Darnold at No. 3.

The Browns then surprised again by taking speedy Ohio State cornerback and Nordonia High School graduate Denzel Ward with the No. 4 pick, which was acquired from Houston last year during the draft. The Browns viewed him as the best pure corner, choosing him over North Carolina State defensive end Bradley Chubb, who many experts considered the best defensive player in the draft.

“He’s one of those very unique and gifted players,” Dorsey said of Ward.

The No. 4 pick usually gets the lion’s share of the attention.

Not this time. Not with Mayfield the No. 1 pick.

The Browns fell hard for Mayfield. They love the chip on his shoulder that’s made him who he is.

“He is an individual that has earned it all the way through his life,” coach Hue Jackson said.

Mayfield was among the most polarizing players in the draft because of his lack of height, oversized personality and character questions that, fairly or not, drew comparisons to former Browns first-round quarterback Johnny Manziel.

“Johnny and I are two completely different people,” Mayfield said. “That’s nothing against him. But what I’ve been able to do is be upfront and honest about who I am during these meetings. I’m confident that I showed that with this coaching staff and with the management throughout this process.

“But for me moving forward it’s just being myself. I’m not going to go out and try and prove I’m not Johnny, I’m going to be myself and in the end that’s going to take care of the rest.”

Dorsey decided the comparison was flimsy, at best — despite a 2017 arrest when Mayfield tried to run away from police. He pleaded guilty to public intoxication, fleeing and disorderly conduct.

He also planted the Oklahoma flag at midfield of Ohio Stadium after beating Ohio State, and grabbed his crotch and yelled toward the Kansas bench after a contentious game.

“I have no qualms about him as a man or a football player,” Dorsey said.

Mayfield is the first quarterback chosen No. 1 by the Browns since Tim Couch in 1999, the first pick of the expansion era. The last three first-round quarterbacks were taken at No. 22 — Brady Quinn, Brandon Weeden and Manziel.

Mayfield was a walk-on at Texas Tech and again at Oklahoma but became the best player in college football, throwing for 4,627 yards and 43 touchdowns as a senior with a 70.5 completion percentage and only six interceptions.

The only number that doesn’t look like it belongs with the No. 1 overall pick is his height: 6-foot-0 5/8.

The last quarterback shorter than 6-1 taken No. 1 was Michael Vick in 2001 by Atlanta, and he was a freakish athlete with an incredibly strong left arm.

None bigger than Manziel, who was out of the league after two years following a string of off-field issues. He went 2-6 as a starter.

“He’s a winner, he’s competitive,” Dorsey said. “He’s got feet to extend the play. He’s got really good accuracy, he’s got the quick release, he has a strong arm. His efficiency in the red zone offense is uncanny.”

“It shows that it’s not about your size, it’s about winning and the mentality and the leadership qualities,” he said.

Considered cocky by some, the Browns focused on Mayfield’s charisma. Jackson referred to him as the Pied Piper of Oklahoma football.

Mayfield was highly productive with the Sooners, going 33-6 as a starter and completing 69.8 percent for 12,292 yards, 119 touchdowns and 21 interceptions.

“Obviously the guy was the best college quarterback this year by far, in our opinion,” Jackson said. “We feel very comfortable as a coaching staff and a personnel staff that this is the guy for us.”

Mayfield said at the scouting combine he wouldn’t settle for being the backup anywhere. The Browns then traded for veteran Tyrod Taylor, and Jackson reiterated Thursday he’ll be the starter. Jackson said the Browns have been burned the last two years by playing rookies before they’re ready.

“I absolutely respect that,” Mayfield said. “That’s a veteran that’s been in the league. He’s a guy that I could sit behind and learn from.

Despite rising from two-time walk-on to headliner of the NFL Draft, Mayfield’s biggest challenge awaits.

He becomes the face of a Browns franchise that’s 1-31 over the last two seasons and hasn’t had a winning season since 2007. At some point he’s expected to be the answer to the 2½-decade quarterback problem — 28 starters since the team returned in 1999.

He won’t shrink from the challenge.

“It’s a mentality,” Mayfield said. “You can think about what’s happened in the past or you can focus on the present and work for the future.

“For Cleveland right now, we’re making the right moves and Tyrod and I, we’re going to put an end to that list of the QB names on the back of the jersey.”

OSU CB Denzel Ward calls it “a blessing” to be drafted by hometown team with No. 4 pick
NFL Draft: Browns take Nevada OL Austin Corbett at No. 33, Georgia RB Nick Chubb at No. 35