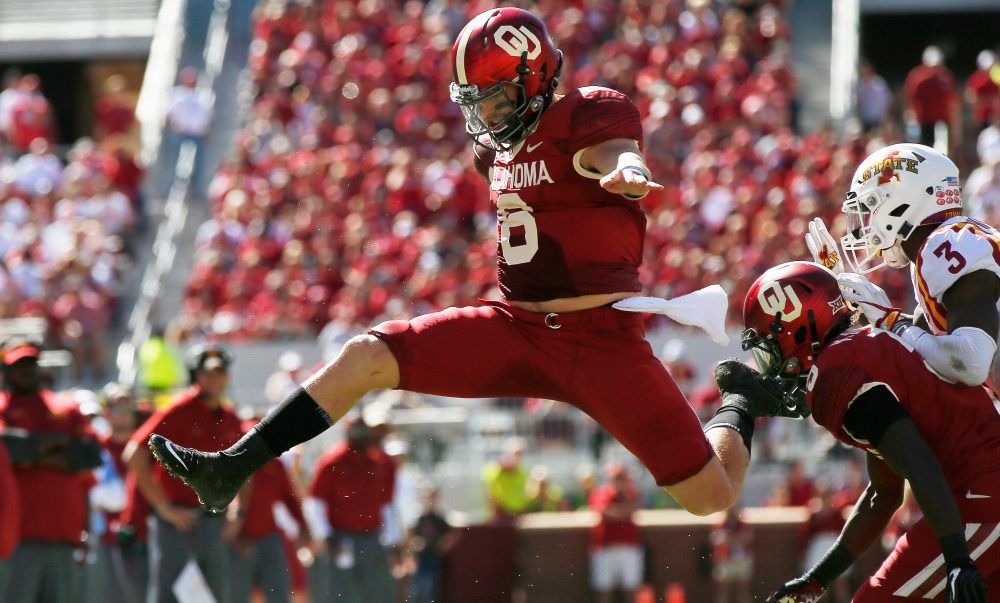 With their first pick in the draft, THE FIRST PICK IN THE ENTIRE DRAFT — let’s be clear — they had their pick of any player, especially any quarterback, from any school in the entire country, no exceptions — the Browns selected a loud, brash, cocky, controversial, undersized, overheated Heisman Trophy-winning quarterback whose career included a moment in which observers shouted in unison, “He just grabbed his crotch!”

If it doesn’t, John Dorsey’s tenure as the Browns’ chief football decision-maker du jour could be a very bumpy one.

If it doesn’t, Baker “I’m not Johnny Manziel” Mayfield, who Dorsey has chosen to lead the Browns out of the Woods of the Woebegone, will be reduced to another footnote of futility at a position of bafflement for the worst team in professional sports.

Other than that, the stakes on this particular selection are fairly modest.

This is not a test.

This is the real deal. A mere four years after the organization wasted a valuable first-round pick on serial party boy Manziel and has had to live with the embarrassment all that entailed, they have drafted another quarterback from the same part of the country with a lot of the same type of baggage.

“I have no qualms about him as a man or as a football player. He’s a really good person,” said Dorsey, who really has a lot riding on this pick.

He’s bringing to Cleveland, where the Manziel scars are still fresh, a quarterback with, in many ways, the same type of profile as Johnny Foolish. An argument could be made that no city in he NFL is less equipped than Cleveland to deal with another one of these kinds of quarterbacks.

That may be unfair to Mayfield, but that’s the reality in Cleveland, where losing, disastrous draft picks and shabby and transient quarterback play is a way of life.

Like it or not, that’s what Mayfield is coming into, and what Dorsey is bringing Mayfield into.

This is a package deal. Until further notice, Mayfield is Dorsey’s signature Browns draft pick.

In trying to tamp down the Manziel comparisons, Dorsey said, “All of our research showed that (Mayfield) is an individual who has earned everything he’s gotten in his life.”

That’s a rebuttal to Manziel’s spoiled rich-kid persona that followed him into, and out of the NFL. Mayfield went from being a walk-on at Oklahoma to a Heisman Trophy winner.

It was clear when Dorsey and Jackson met with the media to explain themselves that this was a sales job, aimed at a rightfully skeptical populace.

At its worst, this was a shocking, unnecessary gamble. At best it was asking your beaten-down customers to buy into being oversold on another shaky idea.

It may or may not work. But this is not the moment in time to be asking this beleaguered fan base to unconditionally buy into the selling of Baker Mayfield. Not with the Manziel embers still smoldering. Not with other less polarizing options available.

But Dorsey has come into the job swinging for the fences, and it will take a home run by him and Mayfield to make this work.

Dorsey and Jackson can talk all they want about all of Mayfield’s outstanding qualities. They can try to smooth over his rough edges, his reputation for being a loose cannon.

But the only way this works is that when Mayfield gets his chance behind the wheel, and that could take a while since Jackson and Dorsey made it clear that Tyrod Taylor will be the Browns’ quarterback in the coming season, that Mayfield become everything he can be, and everything Manziel wasn’t.

All rolled into one. Quickly.

In Mayfield’s favor, he does have an electrifying style, and a certain charisma when things are going well that could play well in Cleveland. But that’s what we thought about Manziel, before his messy flameout.

Jackson said Mayfield “has a chip on his shoulder.”

But so do Browns fans. They are tired of big misses on draft day.

The Browns and Mayfield don’t look at their nationally televised marriage Thursday as a potential big miss, but that remains to be seen.

Dorsey said when he called Mayfield to tell him that the Browns were going to take him No. 1 Mayfield was so excited “he was in tears.”

He wasn’t the only one.

Scott Petrak’s mock draft, version 2.0
Analysis: Baker Mayfield makes a favorable first impression but has work to do in the pocket