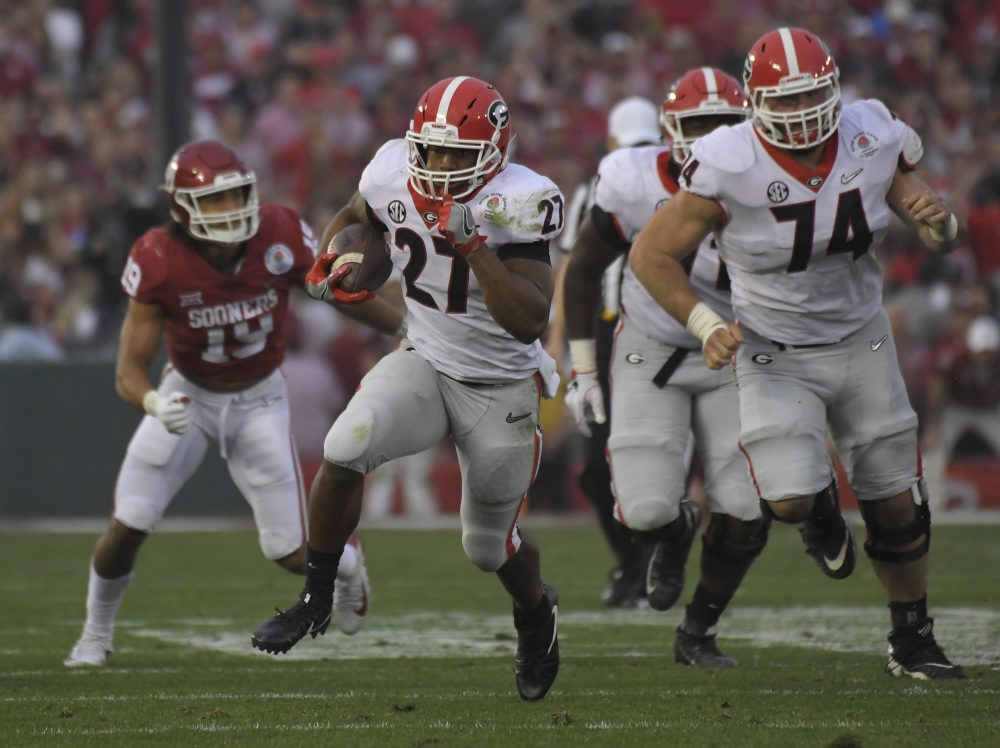 BEREA — Five picks aren’t enough to judge a front office. But after two days of the first draft led by general manager John Dorsey and the reconstructed personnel staff, they clearly have a type.

Two of their first three picks were walk-ons in college — Oklahoma quarterback Baker Mayfield at No. 1 and Nevada offensive lineman Austin Corbett at No. 33 to start the second round Friday.

Georgia running back Nick Chubb, the No. 35 pick, overcame a serious knee injury as a sophomore.

Miami defensive end Chad Thomas, the No. 67 pick in the third round after a trade down from No. 64, had health issues as a kid that delayed his start in the sport.

And Ohio State cornerback Denzel Ward, the No. 4 pick, dealt with the unexpected death of his father.

The Browns, who went winless last season, went after players who encountered adversity and dominated it.

“You hate to say it, it’s cliche, but it’s a cultural change, bringing in the right people with the right attitude, the commitment,” vice president of player personnel Alonzo Highsmith said Friday night. The Browns have five picks remaining Saturday. “It’s going to take the right type of players. It’s time we change, it’s time to turn this thing around and we’ve got to bring in good football players.”

Corbett (6-foot-4 3/8, 306 pounds) was only 240 pounds coming out of high school and didn’t have a Division I offer. He matured into a four-year starter at left tackle for the Wolf Pack, replacing Joel Bitonio, a second-round pick of the Browns in 2014 who shifted to left guard in the NFL.

The Browns want Corbett to play left tackle to try to fill the giant void created by the retirement of 10-time Pro Bowler Joe Thomas. Some NFL teams projected Corbett as a guard, so the Browns will try him at tackle and guard and see where he sticks.

Chubb (5-11, 227) was taken just a few minutes later. He returned from the knee injury to rush for 2,475 yards, a 5.5 average and 23 touchdowns in his last two seasons. His career total of 4,769 rushing yards trails only Herschel Walker in Southeastern Conference history.

“I have no questions on the guy. Just give him the ball,” said Highsmith, a former NFL running back.

His determination to return after the injury also made an impression on Highsmith.

“It tells a lot about the person. His commitment. His will, his want to succeed,” he said. “Football is the most brutal, physical game played. It takes a certain type of people. It’s not for everybody.”

Highsmith wasn’t bashful when asked for a comparison for Chubb.

Chubb joins a backfield of Duke Johnson and Carlos Hyde, who signed a three-year, $15 million deal as a free agent in March.

“I’ve watched the AFC North for a long time and I do know one thing: It’s big, physical, between-the-tackles running style of football,” Highsmith said. “The days of one guy carrying the ball 30 times in today’s football really doesn’t happen very often. And to have two backs that are quality, I think it’s a great thing.”

Dorsey has made one trade in two days, and it barely registered. He sent pick No. 64 to the Colts for Nos. 67 and 178 in the sixth round.

The Colts took Ohio State defensive end Tyquan Lewis, and the Browns grabbed Thomas (6-5, 281), who was a three-year start at Miami, totaling 103 tackles, 26 tackles for loss and 11.5 sacks. The Browns expect him to make an immediate impact stopping the run at left end in conjunction with Emmanuel Ogbah.

“We thought that Chad was one of the most physical defensive linemen in the draft,” VP of player personnel Andrew Berry said. “Really, it shows up with his hand use and his strength. He is just a strong, long, physical guy that uses his hands well.”

Toughness and winning also made the list of desired qualities. That applies to Mayfield, who won the Heisman and was 33-6 as a starter for Oklahoma.

NFL Draft: GM John Dorsey stays quiet but is in prime position to make a lot of noise in his 1st draft with the Browns
Baker Mayfield will open No. 3 on depth chart; can he change coach Hue Jackson’s mind like he did during the draft process?