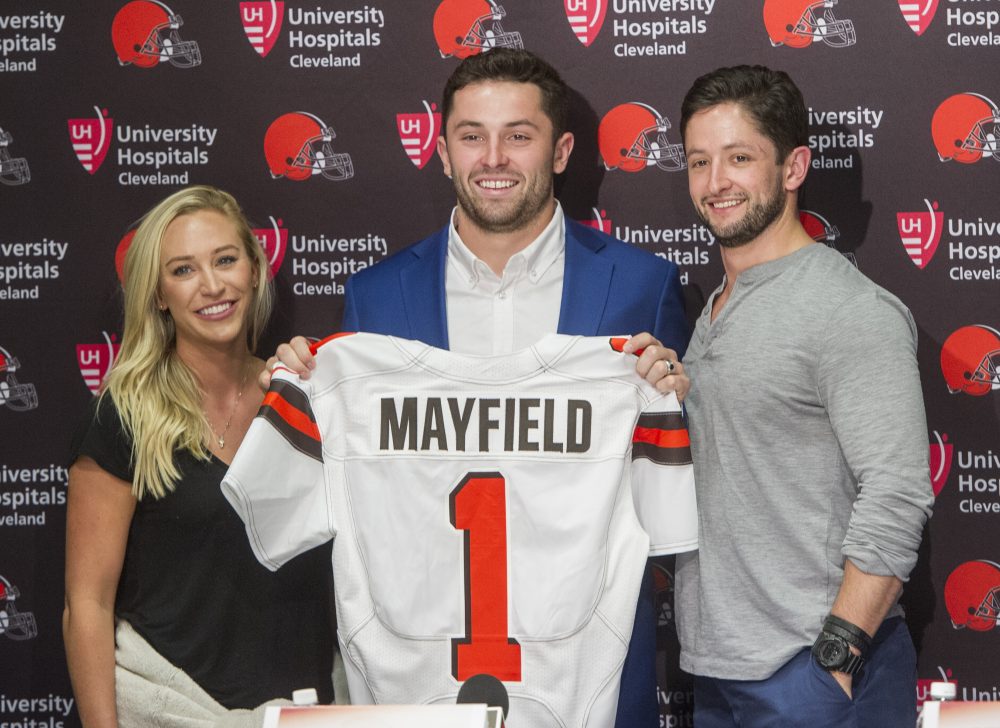 BEREA — More stunning than the selection itself were a couple of the many glowing words general manager John Dorsey used to describe No. 1 pick Baker Mayfield.

The adjectives are in direct contrast to the perception of Mayfield, the Heisman Trophy-winning quarterback from Oklahoma. He believes they fit.

“Absolutely. I don’t think I’d be sitting here if I hadn’t made those strides,” Mayfield said Friday at Browns headquarters.

He acknowledged some of his actions don’t express humility.

Mayfield denies being cocky, but plenty would disagree.

He reportedly blew off an interview with the Bears at the Senior Bowl because they drafted quarterback Mitchell Trubisky No. 2 last year and weren’t going to take him. He has a documentary series called “Behind Baker” chronicling his path to the draft. He has a personal logo.

He said he’s grown in maturity and humility over time.

“I’ve made mistakes, but I’ve also learned from them,” he said. “Without those mistakes, later on down the road I might have had slipups, but now I can learn from those and move forward.”

The Browns spent a lot of time with Mayfield before picking him over a group of qualified candidates at the top of the draft. Dorsey joked that Mayfield was vetted so well he knows his order from the food truck before the arrest in 2017 that led to guilty pleas on public intoxication, fleeing and disorderly conduct charges. He was tackled by police after attempting to flee.

Dorsey was completely serious that he trusts Mayfield with everything that comes with being the No. 1 pick — face of the franchise, locker room leader, team spokesman.

“In doing all of our research on Baker Mayfield, he is an individual who has earned it all the way through his life,” Dorsey said Thursday night. “He has really worked his way up here.

“I have no qualms about this man whatsoever, as a man or as a football player. I think he is a really good person.”

Dorsey busted Mayfield’s chops over the arrest throughout the draft process, including during an interview at the scouting combine. Mayfield took it in stride.

On a different level than the arrest, Mayfield was also criticized for planting the Oklahoma flag at midfield of Ohio Stadium after beating the Buckeyes and grabbing his crotch while yelling at the Kansas Jayhawks during a game.

“That was absolutely over the top. But there’s a fine line,” Mayfield said. “You need to be competitive, but a lot of that you can internalize and use that as motivation to drive you. You don’t have to show it all the time. I can use that for behind the scenes when nobody’s around, the film, the hours you put in.”

He said it won’t be difficult to harness the emotion.

“It’s a blessing to have the responsibility and be in this position,” he said. “So for me, it’s a simple choice to make the right decisions.”

Dorsey said his Catholic faith has taught him everyone deserves a second chance.

“Have you ever been 19 before? Have you ever been 20 before? Young men do certain things and they learn from that,” he said. “I like the guy. He is very mature. He is very smart. I have no problems with a young man being allowed to understand the mistakes he makes, and let’s move forward.”

Mayfield, 23, doesn’t hide the giant chip on his shoulder. He was ignored by the hometown University of Texas, then was a walk-on at Texas Tech and again at Oklahoma. He’s been dismissed or devalued throughout his career because of his size, 6-foot-0 5/8.

“The other characteristic that a young man must have to come here to play quarterback is you must have some inner strength,” said coach Hue Jackson, who also raved about Mayfield’s ability to process information. “This man has that.”

Browns fans were divided on the pick of Mayfield, and will have to earn the support of some.

“I think winning the game will take care of winning them over,” he said. “But I did genuinely want to come here. This is a franchise that traditionally is great. They have a great history and these fans deserve a team that has success and so you want to be the guy to lead that.

“That’s just human nature. You want to be that person. So for me being as competitive as I am, the bigger the challenge for me, I think the better for me.”

Scott Petrak’s mock draft, version 1.0
Notes: Kicker Zane Gonzalez pins “100 percent” on blame on himself, could be out of a job