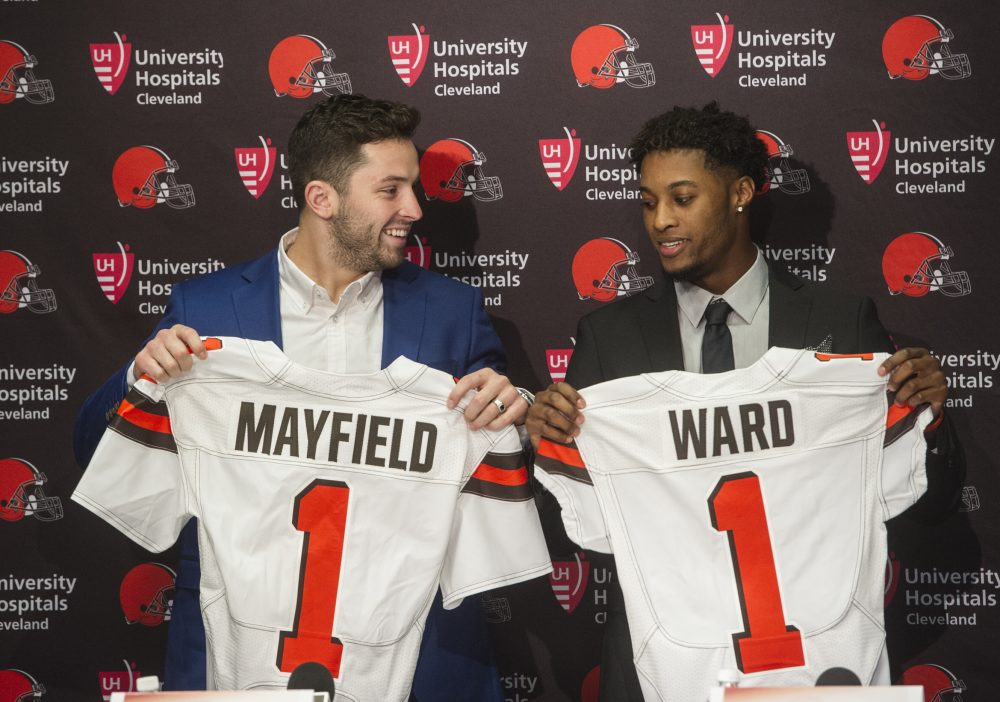 BEREA — Denzel Ward misses his father all the time.

The NFL Draft on Thursday night in Arlington, Texas, was one of the times when the loss was felt even more.

“It was definitely an emotional night, I obviously wish my dad was still alive and could have been there and experienced that with my family and I, but I know that he’s proud of me,” Ward, the No. 4 pick of the Browns, said Friday after arriving at team headquarters. “He watched last night in heaven. It was an exciting time and we enjoyed it and blessed to be here with the Cleveland Browns.”

Ward’s father, Paul, died of cardiac arrest in a spin class May 2, 2016, at 46 years old. He was principal at Carylwood Intermediate School in Bedford and left behind a wife and two sons.

Denzel, a Nordonia graduate, was a freshman at Ohio State at the time. Less than two years later, his mom, Nicole, and brother, Paul III, accompanied him to Texas for the draft and then to Berea. Nicole wrote Denzel a letter to commemorate the achievement, and he read it in a video posted on nfl.com.

“I really just wanted to share with him how I felt from my heart,” she said after the introductory news conference. “As I mentioned in the letter, I just know the journey that we’ve taken and that he’s taken to get to this point and nothing worth having comes easy and you’re always faced with challenges and adversities.

“To the point where we did lose my husband and his dad, that was a bigger challenge and adversity that he had to face, and I know how tough it was, I know the emotions that he, myself and family have gone through. He could have given up. He could have said I’m coming back home or anything, but he didn’t. I felt he used that as motivation and inspiration to move forward and so I just wanted him to know that, in that letter, that I recognized that.”

“My family and I have been through so much,” he said. “My family did so much for me and for them to share this experience with me and for her to share her feelings with me, it means a lot to me.”

Nicole was thrilled Ward was drafted, and even more so the Browns picked him and he gets to come home.

“My emotions were very overwhelming, obviously excited,” she said. “Just couldn’t believe that the dream that I know that he has had all of his life actually came true. I kept a folder of just some of the things that I felt were mementos that I would have over the years and he had wrote a letter, I would say probably around 9 or 10 years old, and in that letter he said that one day he was going to go to the NFL — he said the NFL or the NBA, so it was in his heart at that young age.”

Quarterback Baker Mayfield has changed his tune. And he’s sticking with the new lyrics.

Mayfield, the No. 1 pick, said at the scouting combine he wouldn’t settle for being a backup no matter where he was drafted. The Browns traded for veteran Tyrod Taylor a couple of weeks later, and coach Hue Jackson reiterated Thursday night Taylor will be the starter.

“It will be a great thing for me,” said Mayfield, who picked jersey No. 6, sticking with what he wore at Oklahoma. “The best thing — I say it all the time — that happened at Oklahoma was sitting for a year after I transferred. There’s a positive in every situation.

“Learning from a guy that’s been in the league, that’s seen defenses, that’s had to go through the process, I’ve never done it before, so I can’t say that I know how it’s done. So I can learn from a guy like Tyrod and a guy like Drew Stanton.”

General manager John Dorsey believes hand size is important for a quarterback, so it’s a good thing the Browns hosted Mayfield for a predraft visit.

His right hand measured 9¼ inches at the combine in early March, which is considered the minimum threshold by some. The Browns measured again on Mayfield’s visit and came up with 9¾.

“That is good for the elements in November and December,” Dorsey said. “Actually, I did it three different times to make sure it was right with three different people. Every time, it was 9 6/8 here in our building.

“Sometimes at the combine, they may rush through those processes because it is almost like an assembly line type of measurement and it is not the true measurement.”

Mayfield accomplished his first NFL goal by being the No. 1 pick ahead of fellow quarterbacks Sam Darnold (No. 3, Jets), Josh Allen (No. 7, Bills) and Josh Rosen (No. 10, Cardinals). Next on the list is to outperform them in the league.

“They’re all very talented guys. There’s a reason that they were all in the discussion to be picked No. 1 overall,” Mayfield said. “But, for me, I do view it as a competition, but it doesn’t just end there. My journey is just now starting. I’m not satisfied. I haven’t played a down yet.

“So moving forward, you set big goals in the future, but you’ve got to work and accomplish small ones along the way.”

Jackson is 1-31 in two years and didn’t have a relationship with Dorsey before he was hired in December. Jackson’s record puts him on the hot seat heading into the season, and there was speculation he was on the outside looking in during the draft process led by Dorsey.

“I was in the loop. I have walked in lockstep,” Jackson said.

Dorsey agreed, saying Jackson even attended the meetings with the scouts.

“John and I talk four or five times a day. We have talked about not just the quarterbacks but every position that we are putting on this football team,” Jackson said. “At the end of the day, he shows the respect that I am the head coach of the team and I show the respect that he is the general manager. We work in collaboration in this whole deal.”

“Browns will have the 1st pick again next year,” Burress tweeted.

** Dorsey said about six teams wanted to trade into the No. 4 spot, but he declined and took Ward.

“The player was always higher than the value that was being offered,” he said.