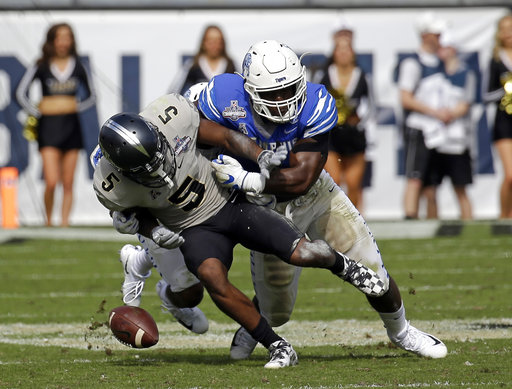 Browns fifth-round pick Genard Avery always wanted to play for Ole Miss but was not offered a scholarship out of high school. He could have become a Rebel after his sophomore season but decided to stay put at Memphis.

“I didn’t know who was going to be the new coach and so much stuff was going through my head.”

His thoughts drifted to Oxford, Mississippi.

“I was a big fan of Ole Miss. I always wanted to be a Rebel growing up, and I was like, ‘OK, I can go back home to my mom and be close to home and play for the school I want to play for,’” he said. “I ended up staying at Memphis, and it was the best decision of my life. (Memphis head) Coach (Mike) Norvell told me to give him a chance, and I did. I had one of the best position coaches in the damn land, and he taught me football.

“The reason why I’m here today is because of him … because he cared, and he treated me like his son, brother, father, all of them.”

Browns coach Hue Jackson said Avery, though undersized at 6-foot-1, 248 pounds, will play middle linebacker when the team starts OTAs in May.

Versatility is the key
Texas A&M wide receiver Damion Ratley, who the Browns selected with the first pick of the sixth round, knows he is going to have to be versatile if he hopes to stick with the team.
He has no shortage of confidence.

“I bring everything to the franchise,” Ratley said. “I can go deep. I can run a curl route. I have hands. I catch the ball away from my body. I can get off pressure.

“I faced it all year and my whole career in the SEC. I bring everything. I’m the type of guy who will do anything special teams-wise. I’m good with playing special teams if they want me to.

“I can do anything you want me to, so I think that I bring everything to the table.”

Ratley was one of the Browns’ allotted 30 players invited to visit the team in Berea. He had a feeling he would end up in Cleveland.

“They were always interested in me, even before my Pro Day happened,” Ratley said. “Once I got up there for my predraft visit, I knew that I had fallen in love with the place.

“It was a great time, and I love that I am a Cleveland Brown.”

Bitonio at tackle?
Browns second-round pick Austin Corbett played left tackle in college at Nevada but played guard at the Senior Bowl. Browns coach Hue Jackson said the team could do some shuffling along the offensive line, and nothing is off the table.

“He’s versatile,” Jackson said. “He can play tackle, he can play guard. We’re going to give him a chance to do both and see where he fits. If we have to do some shuffling along the line, when it’s all said and done we’re going to put our best five guys out there.”

When asked if this meant a potential move to tackle for starting guard Joel Bitonio, Jackson reiterated that all options were on the table.

“You may see anything,” he said. “When it’s all said and done, my job is to make sure we have the best group of guys out there and if it means (moving Bitonio to tackle) then we’ll do that, too.”