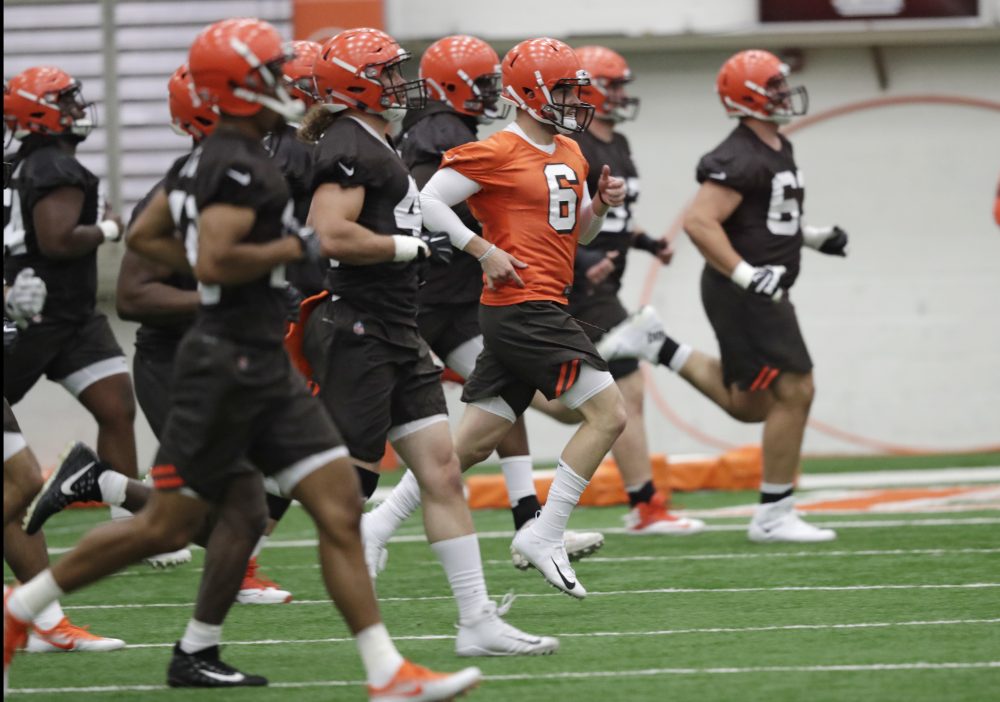 BEREA — Baker Mayfield’s first day on the job featured plenty of pinpoint passes thrown with zip. It also included at least two fumbled snaps, a ball swatted down at the line and an interception on a miscommunication with the receiver.

Even the No. 1 pick in the draft isn’t supposed to be perfect.

“Baker is working at it,” coach Hue Jackson said Friday after the first practice of rookie minicamp. “Obviously, he displayed that he can throw the football. There are some things that we can clean up — can’t have the ball on the ground as much, him and the center. Good first day. We’ve got a lot of football ahead of us, a lot of work to do.”

The hype around Mayfield was obvious earlier in the day when he met with reporters. He was surrounded by cameras and microphones, then did individual interviews with ESPN and NFL Network.

So Jackson felt the need to double down on his stance that veteran Tyrod Taylor will be the starter.

“I am not going to back off of this and we can keep writing this narrative, Tyrod Taylor is the starting quarterback of this football team,” he said. “That will not change.”

He wanted to stop the Baker Train before it really got rumbling but not extinguish the enthusiasm.

“Let’s make sure we pump our brakes a little bit because he has a ways to go and a lot to learn,” Jackson said. “I am very excited about him. He has a lot of characteristics that we love. That is why he is here.”

Mayfield stayed after practice to work on taking snaps from center. It’s a big adjustment for a quarterback who was in the shotgun for almost every play at Oklahoma.

“I think it is going to be a quick fix because he is athletic enough and he is disciplined enough to do it,” Jackson said. “We can’t keep having it in his head.”

The dynamic between Taylor and Mayfield could be tricky, with Mayfield trying to establish himself as a leader and his ascension to starter — at some point — a seeming inevitability. He said stepping on toes won’t be a problem.

“It’s not about individuals,” Mayfield said before practice. “They brought him and I in because we’re both team-oriented guys. He’s the starter, and all I can do is help us out.

Mayfield, 23, said he met Taylor when Taylor popped into the office of quarterbacks coach Ken Zampese to introduce himself.

“That was big on Tyrod’s part,” Jackson said. “He welcomed Baker, willing to work with him. On the other side of that, I thought that Baker was outstanding.

“I watched that interaction between the two and it was like they were long lost friends. There was a hug and all that. That is how you start to build a relationship with someone. Hopefully that will teach Baker what it is like to be a quarterback in the National Football League.”

Taylor has been a constant presence during the offseason program as Mayfield gets situated in his new surroundings.

“Everything I’ve heard, even when I went on my visit at the Bills, they said the same things about him, he’s just an unbelievable guy,” Mayfield said. “You see that and then you see him up here, how often he’s actually here, it’s very transparent who he is.”

Mayfield has backed off his comments at the scouting combine that he wouldn’t settle for being a backup, but he won’t fade into the background.

“Putting myself in the best position possible going into OTAs and going into camp to where I can stay healthy and that I’m ready to go compete,” he said of his plan for the spring and summer. “Right now it’s about leveling the playing field, I’ve got to catch up on the playbook, I’ve got to catch up on the mental side of this game so where I come into camp and it’s just about competing.”

The leadership qualities that attracted general manager John Dorsey and Jackson and secured Mayfield’s spot as the No. 1 pick are just part of his DNA.

“I think I was just born with it,” he said. “I think passion for the game. I love doing it. I love being the guy to help people out. If we win, it’s on my shoulders, but if we lose, it’s on mine, and I wouldn’t have it any other way. I take that responsibility and I thrive on that.

“I’ve just got to be that guy in the locker room, be that guy that gets everybody going and show them that we’re all here for a reason.”

Jackson isn’t worried about Mayfield’s personality being too strong for the backup role.

“I do not think that is going to be an issue at all. I think Baker is a very astute individual,” he said. “He understands how this works. I think he is going to take his chances when he has opportunities to lead. Right now, Tyrod, when we all come back together as a group, will start off in a leadership role. That does not mean that other people cannot lead.

“Tyrod has demonstrated every day what it is like to be a starting quarterback in the National Football League. I want some of that to rub off on this young guy so he can see firsthand what it means to play quarterback in the National Football League. Baker doesn’t know. He has a long way to go. He has work to do. The thing I like about the young man is he is going to do the work. I truly believe that.”

Agent says Patriots talked about trading up to No. 2 for Baker Mayfield before Browns drafted him at No. 1
No. 4 pick Denzel Ward doesn’t practice with hip flexor strain, says should be back soon