Tyrod Taylor thrives in underdog role, will call on experience as he tries to keep No. 1 pick Baker Mayfield on bench 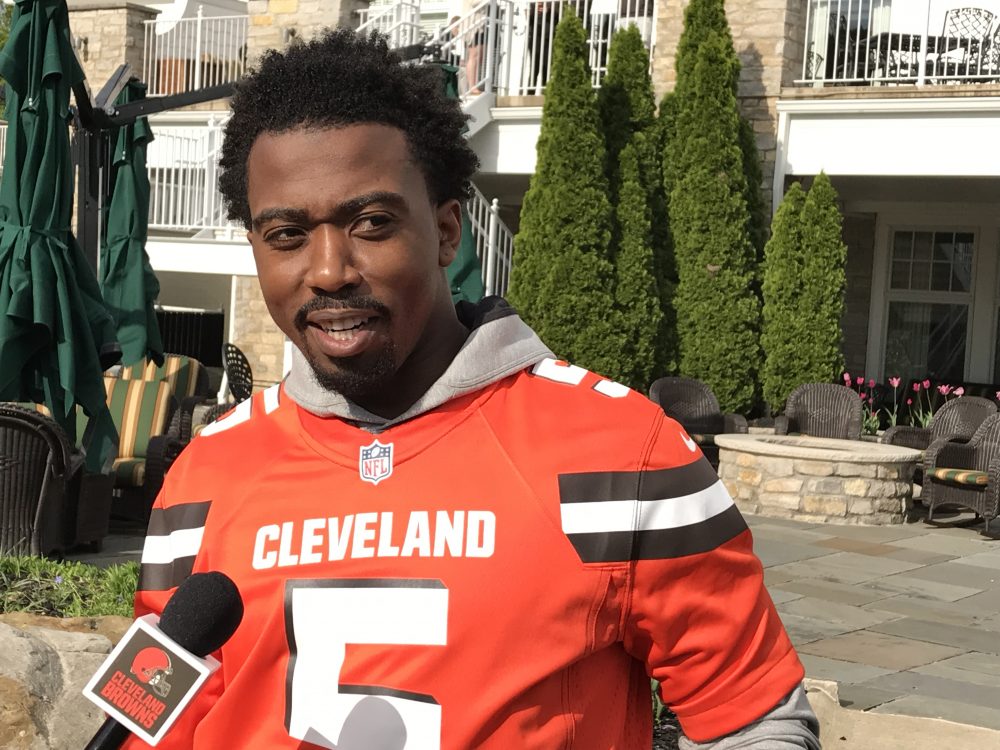 ROCKY RIVER — Tyrod Taylor was walking into the movie theater at SouthPark Mall on the first night of the NFL Draft when his phone rang.

The courtesy call from coach Hue Jackson was to inform him the Browns were taking Oklahoma quarterback and Heisman Trophy winner Baker Mayfield with the No. 1 pick.

While the outside world assumed Taylor’s world would be rocked, the veteran with a 22-21 record as a starter took the news in stride.

He continued into the theater, watched “A Quiet Place” — he wasn’t a fan of the horror movie — and has continued preparing for his first season in Cleveland.

“I didn’t have necessarily a reaction or anything. I appreciate him calling,” Taylor said Monday at the Browns charity golf outing at Westwood Country Club. “My mindset doesn’t change, it’s not going to change, we’re going to continue to keep putting my work hat on every day, continue to keep leading the guys and doing whatever it takes to help turn this organization around and push my game to the next level.

“I’m down here to help turn this organization around and help win games and I’m looking forward to doing that.”

Jackson said it was important to keep Taylor informed of the organization’s plans at the position.

“As I said when we brought him here, he’s our starting quarterback,” Jackson said. “Our quarterback should know exactly what we’re trying to accomplish and do, and he’s still the starter.

“I wanted him to know we’re going to bring Baker aboard, that Baker will compete, but at the same time, I wanted to make sure he knew he had my support just as Baker has my support, just as every quarterback on our team has my support.”

Scarred by 1-15 and 0-16 records and being forced to play rookies Cody Kessler and DeShone Kizer too early the last two seasons, Jackson has gone out of his way — and perhaps over the top — in locking in Taylor as the starter. He said before the draft there wouldn’t be a quarterback competition, and reaffirmed at rookie minicamp that Taylor’s spot atop the depth chart wasn’t going to change.

That doesn’t mean the conversation about Mayfield will stop, or the speculation that he will supplant Taylor as the starter by Week 1 against the Steelers. Jackson said Taylor has the right temperament to handle the outside noise.

“He’s well-equipped and everybody else is creating all of the buzz,” Jackson said. “Don’t get me wrong, I think Baker Mayfield is the future of this organization and a tremendous football player. But at the same time, he’s never played a game and never won a game in the National Football League. Tyrod has, so that’s the road we’re going to travel right now, and keep going from there.”

Being counted out is nothing new for Taylor.

He was a sixth-round draft pick of the Ravens in 2011, No. 180 overall. He was the 11th quarterback selected that year, didn’t start a game and threw only 35 passes in four years with Baltimore.

He became the starter with the Bills in 2015 and ended their playoff drought last season, but the organization was looking to replace him seemingly from the time he got the job. The same can be said of the Browns, though they valued him enough to trade a third-round pick (No. 65) and pick up his $16 million in guaranteed money for 2018.

“As far as the underdog mentality, yes, you can always say that’s always going to drive me,” Taylor said. “What drove me every day was remembering my mom and my parents’ faces and the feeling that I had on draft day, not being happy about that.

Taylor said he “absolutely” kept track of the quarterbacks drafted ahead of him and noted No. 1 pick Cam Newton in Carolina and second-rounder Andy Dalton in Cincinnati are the only others still starting.

Taylor sought out Mayfield to welcome him and said their relationship is in a “good space.” Mayfield has been respectful of Taylor’s experience and spot on the depth chart but plans to compete for the starting spot when organized team activities begin Tuesday.

“He’s a competitor, as well as myself,” Taylor said. “I think that’s what drives us, that’s what gets us to the point that we’re at now in our career. That doesn’t faze me. I’ve been put in a number of situations throughout my career and I’m going to continue to keep being the same person and continue to keep, I guess you could say, proving people wrong. Going out there and helping the team win games.”

Even if Taylor holds down the job, the attention paid to Mayfield and the questions about him won’t stop. Taylor said he’s prepared.

“Absolutely. It’s part of the job. It’s part of being a leader, being able to take on questions, even on days that you don’t want to take them on,” he said.

“He’s been an underdog himself all of his life,” Jackson said. “People have always counted him out and people have always chased better, and he’s always proven otherwise, so I think he’ll get an opportunity to do that.”

Left guard Joel Bitonio has been impressed with Taylor through the first month of the offseason program.

“He’s a stud, man,” Bitonio said. “Everything he does, on and of the field. He works his tail off.

“He’s putting in the time, he has a quiet confidence about himself and once he gets on the field he has command of that huddle. It’s really refreshing to be around a guy like this. You know he’s doing everything in his power to be as prepared as he can be off the field.”