Hue Jackson fulfills promise with plunge into Lake Erie, vows to turn page to winning, raises $30,000 for his foundation 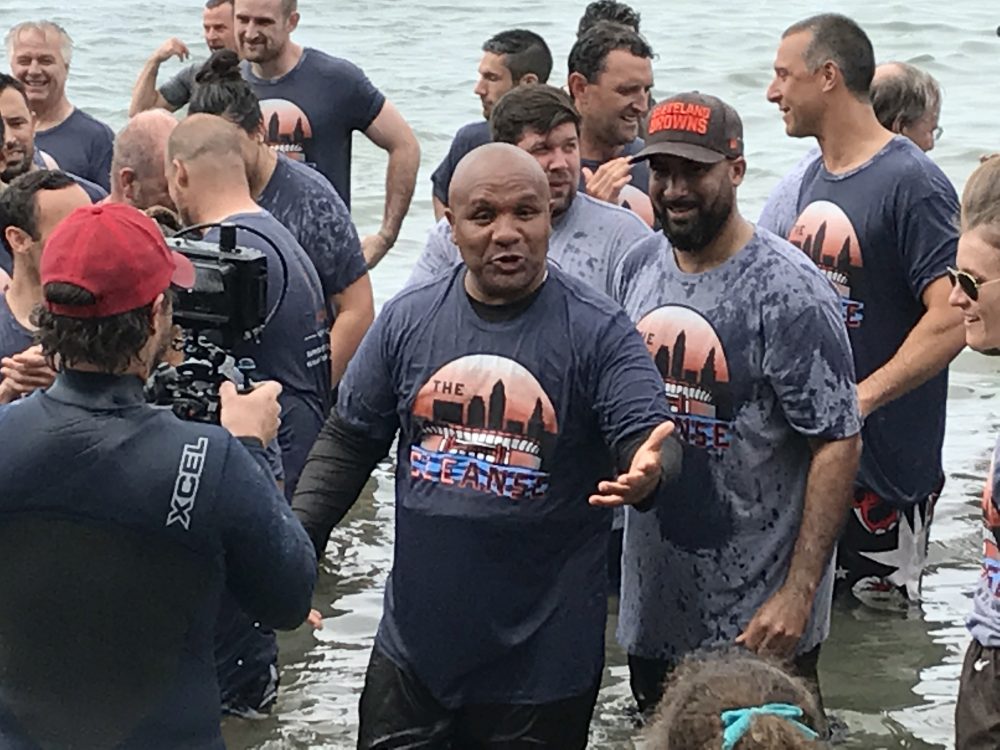 BAY VILLAGE — Coach Hue Jackson took the hand of wife Michelle, stepped from the beach into the water and dived headfirst into Lake Erie.

When he surfaced, he raised his arms and the celebration ensued. There were hugs, high-fives and adults splashing in the shallow water at Huntington Beach.

Everything that was missing during the Browns’ winless 2017 season.

Jackson’s mistake of predicting improvement from the 1-15 record in 2016 led him to the lake for the first time. He felt the fans deserved payment after the guarantee had gone so horribly wrong.


“What I want them to understand and feel is that this is hard, because I know it’s been hard for them,” he said. “This is not something I do every day, but I made a statement and I have to back it up.

Some fans wanted Jackson to take a polar plunge right after the season, but he said he couldn’t because of a stent he’s had since 2014. The lake has warmed … to a degree.

“It was refreshing but it was cold, there’s no doubt about that,” he said.

Jackson turned the event into an organizational cleansing. Dressed in “The Cleanse” T-shirts marking the occasion — they’re available on the Hue Jackson Foundation website — owner Dee Haslam and about 150 members of the organization, including assistant coaches but no players, participated. Jackson addressed them before entering the water and got emotional.

“Those people have been with me every day,” he said. “When you lose as many games as we have and you keep parking your car and walking into the building and have to see those faces each and every day, I carry them with me. I carry them and their families and this city with me contrary to what anybody believes.

“It’s on me. I wear it every day. So I just thank them for being a part of this because they didn’t have to do this. I’m thankful.”

Jackson pledged $100 for each member of the organization to take the dip, and owners Jimmy and Dee Haslam matched the funds for a total of $30,000 to Jackson’s foundation to fight human trafficking.

“It means everything,” Jackson said of the Haslams’ contribution. “Jimmy and Dee Haslam have been supporters of mine since I’ve been here. They’ve never wavered, not one bit. I know people don’t understand that or think that’s the way it should be but they’ve been as supportive as anybody I’ve ever been around on all fronts, as a coach, as a person, as a person that’s trying to fight this human trafficking.”

Dee Haslam’s hair was still dripping after a full dunk.

“The last couple years have been terrible for us and been really terrible for our fans,” she said. “We take that responsibility and feel horrible about it because Northeast Ohio and the fans of the Cleveland Browns deserve so much more. So we’re going to continue to work really hard and do everything we can to make this a winning organization.”

If the Haslams had listened to the vast majority of the fans, Jackson would’ve been run out of town long before jumping in the lake. His 1-31 record in Cleveland is the worst stretch for a coach in NFL history.

Jackson wanted to keep the event low-key but had no chance of avoiding a spectacle, just months after the 0-16 parade caught the attention of the nation. A helicopter from a local TV station flew overhead, and an NFL Films crew for “Hard Knocks” captured every moment, including by a cameraman in a wetsuit in the water.

“This is more than I anticipated it would be, first and foremost,” Jackson said. “We understand we haven’t been what we need to be for the city of Cleveland and we know Cleveland Browns football hasn’t come close to what I want it be to. We get that, and we hurt just like they do.

“But at the same time, I think we all want to turn the page and get to winning and get that stadium and get the Dawg Pound rocking like it should be and get back to winning football games here and make Cleveland a feared place to come to.”

Jackson said he’s done making guarantees but does expect a lot less losing in the fall.

“We plan on doing something special,” he said. “We’re not going to talk about it, we’re just going to work.”

Browns hire Steve Malin as director of college scouting in series of moves to personnel department
Deal or no deal? LB Mychal Kendricks close to signing with Browns after initially denying report