No. 1 pick Baker Mayfield moves up to No. 2 in QB rotation, but isn’t happy with the pace of his development 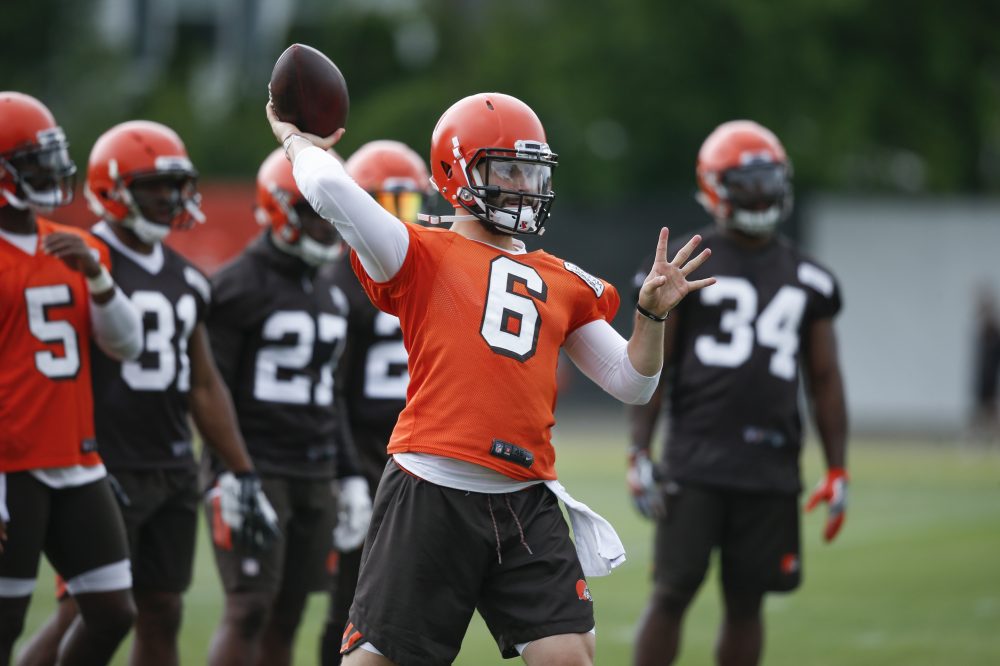 BEREA — Baker Mayfield isn’t used to three-interception practices. Or complicated defenses testing his knowledge of the offense. Or passing windows that close in the blink of an eye.

Mayfield, the No. 1 pick in the draft, is improving as he adjusts to life in the NFL but he isn’t satisfied with the speed of his development.

“I set my own expectation. I don’t listen to anybody else’s, that’s how I always have been,” he said Tuesday after an organized team activities practice. “And so for me, the pace has been a little bit slower than I really wanted it, but I’ve made some strides within the past week of practice that I’m proud of, and that’s all I can continue to do is keep striving and make a couple more.

Mayfield also isn’t used to backing up anyone. He was a three-year starter at Oklahoma and won the Heisman Trophy as a senior.

He was No. 2 in the quarterback rotation Tuesday and worked with the second-team offense. He previously was third behind starter Tyrod Taylor and veteran Drew Stanton.

Coach Hue Jackson tried to downplay the significance of the move and said he’s yet to consult with coordinator Todd Haley and quarterbacks coach Ken Zampese to determine how the rotation will go in training camp.

“I just mixed it up,” Jackson said. “I want to keep tinkering with that a little bit. I made a decision this week with the staff to make him second and get him some reps there.

“There’s nothing to it, nobody should read into it.”

Jackson remains adamant that Taylor is the starter and said that has allowed him to bring along Mayfield at a slower pace than last year with rookie DeShone Kizer, who wound up being the Week 1 starter.

“Absolutely. We have a starting quarterback,” Jackson said. “Tyrod has still got to get those reps, those reps are really important. He goes with the ones all the time and with Baker we’re bringing him along.

“We’re teaching him the National Football League. He’s done an outstanding job, working hard every day and making the most of his reps, but it is comforting to know for our team that we do have a starting quarterback.”

Jackson pointed to Mayfield taking snaps under center as his biggest improvement during OTAs. Mayfield said he’s getting more comfortable with the footwork, keeping his eyes up and reading the defense.

There’s a lot to process.

“Obviously the speed’s picked up with all the veterans here, there’s no doubt about that, it’s inevitable,” he said. “I’m trying to slow it down. Definitely improved under center, knowledge of the game, knowledge of our offense.

“You’re not going to complete the whole puzzle at once, that’s not how it works. I’m trying to get better at one thing at a time and get better every day, and so right now it’s taking care of the ball and continuing to learn our offense.”

The growing pains were obvious early in OTAs when Mayfield threw three interceptions in a practice. He’s also had plenty of good moments in an up-and-down few weeks.

“I don’t think I’d be here if that was a typical day at work, just to be quite honest with you,” he said. “I hold myself to a higher standard. That was definitely one of the worst days I’ve had. I’ve had a couple more bad ones, but it’s not going to be perfect. That’s why we’re here practicing. That’s why it’s only the beginning of June. I’ve got some time to learn and keep growing.”

On Tuesday, Mayfield rolled right and hit rookie sixth-round receiver Damion Ratley for a touchdown in a red zone drill, and tight end David Njoku later dropped a ball in the end zone. Mayfield also led the offense into field-goal range in a two-minute drill, hitting tight end Darren Fells down the seam to beat a blitz, then spiking the ball to stop the clock with five seconds left.

“I have to be ready for whenever that opportunity comes, if that’s this year, next year or in five years,” Mayfield said of starting. “I have to be ready as soon as that comes, and right now, getting better every day. That’s all I can do. And try and improve for this team and push everybody else to get better.”