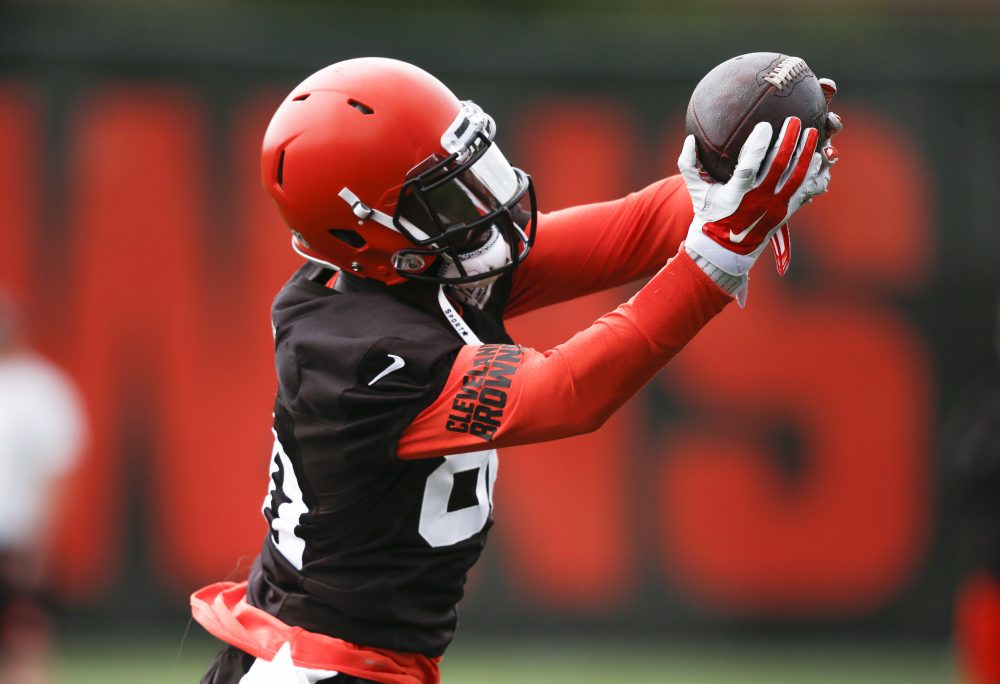 The No. 4 pick in the draft in April practiced with the first-team defense Tuesday during the final week of organized team activities. He replaced E.J. Gaines as the starter opposite TJ Carrie.

“Ward being out there is because he is earning it,” coach Hue Jackson said. “He is working at it. He is doing good things. He plays a position that we think we have been needing a guy to step up.

“We see things of him improving each and every day and doing the things that we are asking. He needs to continue to do that to continue to be out there, but we know that he is very talented. That is why we drafted him. He has displayed that since he has been here.”

Ward, who went to Nordonia High School and Ohio State, made several plays last week during a practice open to reporters, including breaking up a pass to receiver Josh Gordon in the end zone.

Jackson was asked where Ward has improved the most.

“It is just all of the things we do and the different types of receivers that changes from play to play and who he has to go up against, learning a complicated system that we have on defense,” he said. “I think that he has handled that pretty well.”

Defensive end Emmanuel Ogbah received a vote of confidence on the first night of the draft when the Browns passed on North Carolina State defensive end Bradley Chubb and took Ward. Ogbah will remain the starter opposite Myles Garrett, the No. 1 pick in 2017.

Ogbah, the No. 33 pick in 2016, had 5.5 sacks in 16 games as a rookie and four last year in 10 games before breaking his foot. He’s back practicing on a limited basis and said he’s healthy enough to play in a game right now.

Garrett has consistently spoken highly of Ogbah and didn’t want their working partnership to change with the selection of Chubb.

Only receiver Josh Gordon had been with the Browns longer than Carder, who joined the team via waivers in 2012 and appeared in 77 games with 20 tackles on defense and 38 on special teams.

He missed all of last season with a torn anterior cruciate ligament suffered in the preseason.

“Thank you @Browns and the fans for everything over the years, it’s been a crazy ride!” Carder tweeted. “Not always fun, but made lasting relationships I will carry with me. With every ending is a new beginning #dawgpond #browns #clevelandbrowns”

** Veteran offensive lineman Donald Stephenson, who was signed in the offseason, hasn’t participated in OTAs. He’s expected to add depth and could be an option to start at left tackle.

“He is just not here right now. He is taking care of some business,” Jackson said. “We will definitely address that at the proper time.”

The plain helmets are even plainer this spring.

The equipment staff removed the two brown stripes and one white stripe that usually run down the middle.

Jackson said he won’t give out stripes until the players make the roster after training camp.

Kendricks was invited to the White House as part of the Eagles team that won the Super Bowl — until President Donald Trump withdrew the invitation Monday on the eve of the scheduled visit.

He was asked if he was disappointed Trump canceled the event because many of his former teammates planned to skip it.

“I’m a part of the Browns, man,” he said. “I’m focused on different things, so I haven’t even put any thought into that, honestly.”

** Receiver Jarvis Landry beat safety Jabrill Peppers for a touchdown from Taylor on a post pattern in a two-minute drill.

Notes: Hue Jackson says he’ll have at least 100 fellow lake jumpers, is eager to put plunge and losing in the past
Notes: Duke Johnson expects even more from himself in 2018; another surgery for CB Howard Wilson