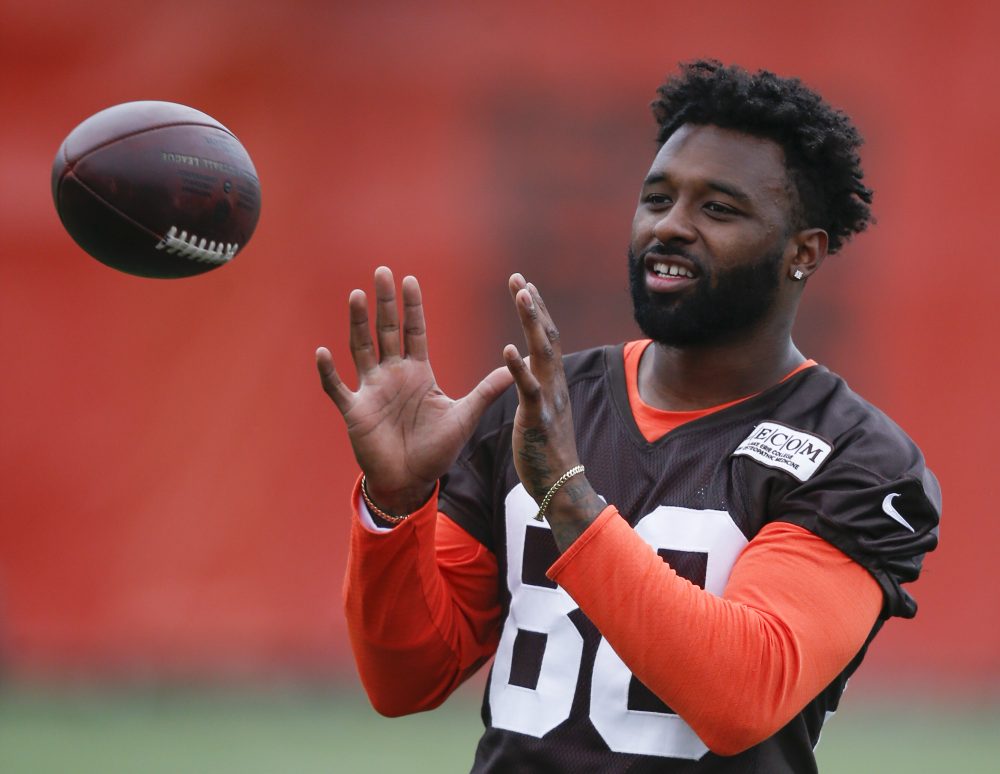 Q: With Jarvis Landry’s implication that Miami kept his routes short, do you see a role beyond the slot for him in Cleveland?

A: I do. The Browns didn’t agree to pay him $47 million guaranteed to pigeonhole him in the slot.

I expect Landry to be the starting receiver opposite Josh Gordon, then move into the slot in three-receiver sets. Landry is proud of his versatility, and that includes the ability to succeed at all levels of the route tree. After viewing three OTAs practices, it appears coordinator Todd Haley trusts Landry to do much more than run 5-yard hooks and sit in the soft spot of the defense. He’s been able to get open on a variety of routes, including about 20 yards down the seam to beat safety Jabrill Peppers.


Q:
Why cut Tank Carder now? Certainly not worst talent on roster. Pair of punters and fullbacks remain on roster. We’re cutting a LB5 and special teams ace that could mentor others in camp? By chance, did Tank want out after the Mychal Kendricks move?

A: I can’t argue with your first point. Carder is an NFL-caliber talent, while plenty of the players left on the 90-man roster aren’t.

But general manager John Dorsey was looking ahead to the regular-season roster and didn’t see a spot for Carder. With Kendricks, Jamie Collins, Christian Kirksey, Joe Schobert, James Burgess and Genard Avery, Carder’s chances of making the team were slim. And the Browns weren’t going to pay him to just play special teams.

Q: How has Jabrill Peppers looked so far? Reason to believe he’ll have a big year?

A: Peppers is better in pads and when he can hit, so the offseason isn’t his best setting. I saw him get beat on the aforementioned catch by Landry and make a good play on a pass over the middle.

With Peppers back at his more natural strong safety spot, the opportunity is there for him to have a breakout season. Peppers has the requisite athleticism and desire, but he struggled as a rookie at free safety getting the defense in the right call and then diagnosing the offense’s play. He believes a second season in coordinator Gregg Williams’ scheme will erase those mistakes and allow his natural talent to come through.

I didn’t like the pick of Peppers at No. 25, but he won me over last year with his attitude. Now he needs to translate his many skills into performance.

Q: Is Mychal Kendricks a better cover LB than Christian Kirksey? That was one of the main faults of the LB group, so would Kendricks improve that?

A: Kendricks is surely athletic enough to be good in coverage, as is Kirksey. I talked to someone in Philadelphia who said Kendricks struggled in coverage for a couple of years, then had a huge turnaround last year, even though he didn’t play a ton of third-down snaps in a traditional linebacking role.

The linebackers can’t be much worse in coverage than they were last year. Part of the problem was the lack of quality cornerbacks, so Gregg Williams used three linebackers in passing situations more than he would’ve liked, which left them in difficult matchups. But the linebackers must be able to cover tight ends and backs and weren’t nearly good enough. That includes Kirksey, but I believe he is capable of improving.

Without seeing Kendricks on the practice field, I can’t give him an edge over Kirksey. But I would expect Kendricks and Kirksey to be the linebackers in most nickel situations, with Collins shifting to end.

Q: Sam Beal and Brandon Bryant are two names linked to the supplemental draft. Any chance we draft one of these two players, if eligible, or someone else? And if so, what round do the Browns go for in selecting him, or them?

A: Why not? GM John Dorsey has shown he’s willing to use any avenue to improve the talent on the roster. Beal and Bryant play in the secondary, which has been an obsession for Dorsey in the offseason. And the Browns have plenty of draft picks in 2019.

Bryant, a safety out of Mississippi State, is the type of elite athlete that Dorsey loves, so I could see him spending a third-round pick if he likes what he sees on film.

Q: Do the Browns seem to be pushing for more offensive tempo this season? It seemed that the Browns looked sluggish at times last season, not in rhythm.

A: Sluggish is being kind.

You’re right about the pace of the offense last year, and I think much of that should be attributed to having a rookie, DeShone Kizer, at quarterback. Hue Jackson was hamstrung by Kizer and the talent across the offense, so he stuck to the basics and slowed down everything.

New coordinator Todd Haley shouldn’t have those issues following the additions of Tyrod Taylor, Jarvis Landry and Carlos Hyde, and with a full season of Josh Gordon. Taylor’s experience and intelligence will allow Haley to do whatever he wants in terms of tempo and no-huddle.

I even noticed an uptick in the practice tempo last week. The drills looked crisper, and the time between drills condensed.

Mailbag: What does the Mychal Kendricks signing mean for the LBs? Duke Johnson’s role? How’s the depth?
Mailbag: Which draft picks are destined for practice squad? A surprise starter? Who will return kicks?