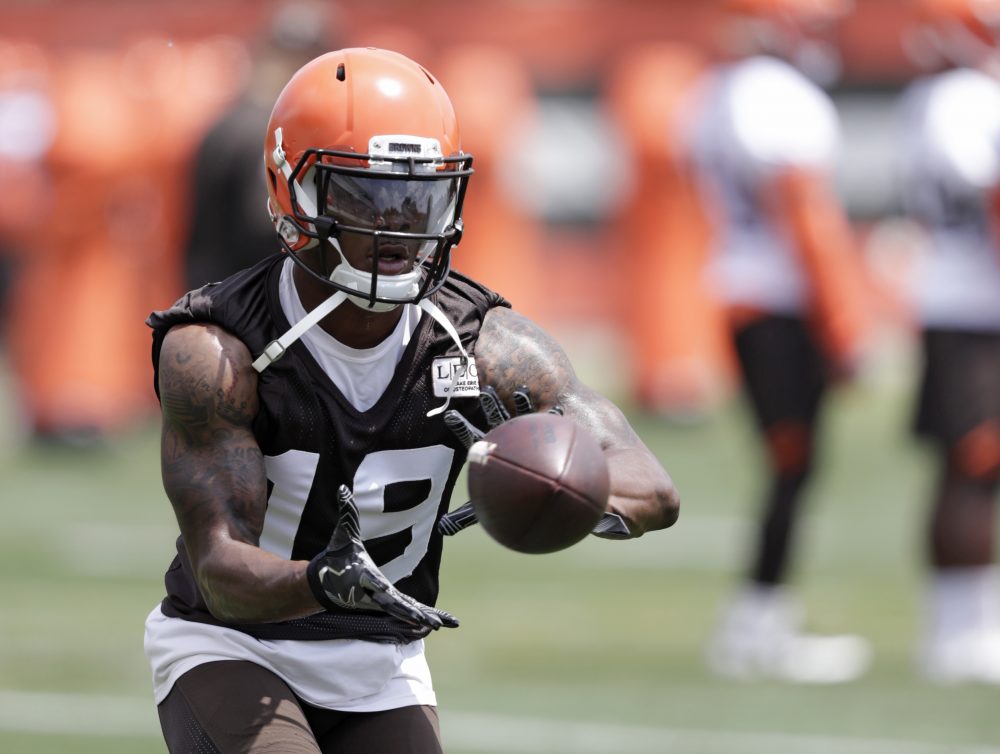 “He understands this is a big, big year in his career,” Haley said Thursday at the close of minicamp. “Year 3 is usually the make-or-break year of what kind of player you are going to be. I have made that clear to him. He understands it, and he is working hard accordingly to try to be the best that he can be.”


Coleman was drafted by former head of football operations Sashi Brown to be a No. 1 receiver. He’s expected to be No. 3 this year behind Josh Gordon and Jarvis Landry — although he could be pushed for playing time by rookie Antonio Callaway — and new general manager John Dorsey has no allegiance to him.

When Coleman was able to stay on the field his first two years, he was inconsistent. Coach Hue Jackson has also challenged him to make the necessary leap this season.

New receivers coach Adam Henry is trying to get the most out of Coleman.

“He’s just got to keep working at it and that’s the biggest thing that he does,” Henry said. “He comes in early, he works hard, he’s taking notes. He’s doing the little things, learning the route techniques, things of that nature, just doing the things that he does well and expound on that and tweaking some things. But mentally just being in there.

“He’s champing at the bit. He wants more, so it’s just progression each and every day.”

WHERE THERE’S A WILL

Linebackers coach Blake Williams clarified where new linebacker Mychal Kendricks fits in the 4-3 scheme. He will play on the weak side.

Jackson created confusion when he said last week that Kendricks would begin “in the middle.” That doesn’t mean at middle linebacker, where Joe Schobert returns after a Pro Bowl season.

“Usually you have two guys in the middle, you have two guys still stacked in the box. I think that’s what he was talking about,” Williams said. “Our Mike (middle linebacker) is a little bit different, that’s really the quarterback of our defense.”

The coaches don’t want to overwhelm Kendricks in his transition, so they’ll keep him on the weak side, where he played in Philadelphia.

“Being more in the box, run front, blitzing, covering backs and tight ends from in there is what he’s done,” Williams said.

Christian Kirksey was the starter on the weak side last year, playing every snap and tying for fourth in the NFL with 138 tackles. Williams insisted he won’t be the odd man out with the addition of Kendricks and said the staff loves Kirksey’s ability to cover tight ends man-to-man.

But the coaches will have decisions to make on which linebackers play in which personnel groupings and how much. Jamie Collins is the returning starter on the strong side.

“He’s probably the most intelligent player and most intelligent Mike (middle linebacker) we’ve ever coached in this system,” Blake Williams said. “His capacity for understanding and thinking quickly and knowing what the offense is doing.”

Schobert was a fourth-round pick in 2016 and saw limited playing time as a rookie. He played every defensive snap last year and tied for the NFL lead with 144 tackles.

“I told him I feel like he grew three years in one last year.”

Defensive end Myles Garrett hasn’t gotten over the Cavaliers being swept in the NBA Finals. He pulled no punches when talking about Kevin Durant, star of the Golden State Warriors and NBA Finals MVP for the second straight year.

“KD broke the league,” Garrett said on “The Ken Carman Show with Anthony Lima” on 92.3 The Fan.

Durant signed with the Warriors in 2016 after Golden State had been to two straight Finals, the second one a seven-game loss to the Cavs and LeBron James.

”If I were him, I would’ve never made a move like that in the first place,” Garrett said. “Me, I’m too competitive to try and ride on somebody’s coattails to get a ‘W.’ But for him, you might as well stay at the spot you’re at now. There’s no point in leaving since you’ve already taken that moniker where he’s been called the snake and the cupcake and all that. You might as well stay and just keep on winning.”

Rookie running back Nick Chubb, the No. 35 pick, has made a strong first impression, looking good in the OTAs and minicamp with explosive runs and sharp cuts. Running backs coach/associate head coach Freddie Kitchens said he’s shown violence, despite the absence of pads.

“The one thing we liked about Nick during the evaluation process, during his drill work, his interviews, he’s all business,” he said. “He’s got a great work ethic, he’s physical in everything he does.”

** Jones said there will be a punting competition between incumbent Britton Colquitt and Justin Vogel, who was recently claimed off waivers. Colquitt missed minicamp following knee surgery, but Jones said the reports have been positive.

** The Browns signed kicker Ross Martin, who had a tryout in minicamp. Linebacker DeMarquis Gates was waived.

Notes: Hue Jackson says Tyrod Taylor has earned the starting job that was given to him
Notes: WR Ricardo Louis out for season after neck surgery; Denzel Ward signs contract