Minicamp observations: Tyrod Taylor’s the man; Josh Gordon got ahead of himself; increase in talent is obvious 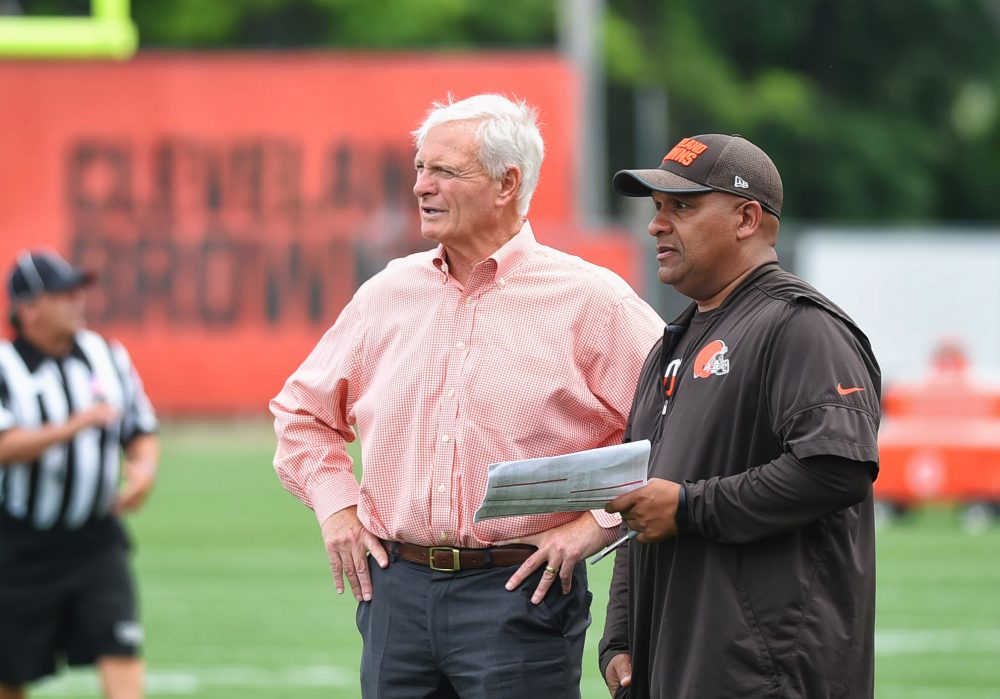 The Browns are done until training camp in late July.

The media were allowed to watch five practices over three weeks of organized team activities and this week’s minicamp. Although the players weren’t in pads and the intensity hadn’t risen to training camp level, there was plenty to learn.

Here are five observations as coaches and players scatter for a much needed break before the real grind of the season begins.

I didn’t expect to be writing this much about Tyrod Taylor at this point on the calendar. I know he’s the starting quarterback and new to the team, but he’s not Tom Brady. More relevant to the Browns, he’s not Baker Mayfield.

But Taylor has made it impossible to not make him a major focus of my coverage. His impact on the organization in three months has been enormous and he’s solidified his spot as the starter despite the oversized presence of Mayfield, the No. 1 pick in the draft. I expected Mayfield to at least threaten for the starting job, but Taylor has widened the gap.

As impressive as his leadership has been, his performance on the field shouldn’t be overlooked. He starts by making quick and correct decisions. Then he delivers an accurate ball with tons of touch.

“It’s just so easy for him,” quarterbacks coach Ken Zampese said Thursday. “He doesn’t strain to get distance and that’s the best thing. His smooth stroke, he’s got plenty of power and distance, so it never looks like he’s grunting to throw.”

Taylor will give the Browns a chance to win a number of games this year.

Josh Gordon’s comment that the Browns have the best receiving corps got a lot of mileage this week. That’s what happens with outlandish statements made in a slow period on the NFL calendar.

The claim isn’t correct, but it’s not as ridiculous as it sounded at first.

If Gordon fulfills his potential and plays like the All-Pro from 2013, he’s a top-five receiver in the league. Pair him with Jarvis Landry, a reliable producer and three-time Pro Bowler in Miami, and the Browns enter the conversation with the wideouts of Pittsburgh, Atlanta, New Orleans and Minnesota.

But Gordon staying clean and eligible is far from a sure thing, given he hasn’t played a full season since he was a rookie in 2012. The depth necessary to be an elite group is also filled with question marks.

Corey Coleman has been a disappointment through two seasons and doubts remain about his work ethic and football intelligence. Fourth-round rookie Antonio Callaway has first-round talent but couldn’t stay healthy in May and June and couldn’t stay on the field at Florida due to off-the-field trouble.

It doesn’t take long watching Landry to see why he has 400 catches in the first four years of his career. He makes catching look easy.

Landry made plays throughout the offseason in a variety of ways. He made the routine catch. He made the tough catch look routine. He made the one-handed, acrobatic, no-he-didn’t catch.

Taylor raved about Landry’s catch radius, and he was right. Perhaps most impressive is the way Landry plucks the ball out of the air. On a crossing route Tuesday, he reached above his head and the ball stuck to his hands like Velcro.

Fans are going to love how hard Landry competes. After failing to make a catch Wednesday as he fell to the ground with a cornerback attached to him, Landry cussed and was visibly upset. The Browns need that passion coming off 0-16.

All of general manager John Dorsey’s offseason work was obvious when his remade roster took the field. Upgrades are everywhere, and showed up in a quality of play much better than in the previous two seasons under coach Hue Jackson, when Sashi Brown provided the talent, or lack thereof.

Jackson’s frequent smile during practice said it all.

While making judgments in June is foolish, it’s clear the talent level has been raised — at nearly every position. The improvements are most evident in the one-on-one passing drills, where the receivers, defensive backs and quarterbacks take center stage.

How the upgrades translate to the standings won’t be revealed until the season starts. But it’s not being overly optimistic to consider seven wins realistic.

Cornerback Denzel Ward, the No. 4 pick in April, isn’t intimidated by his new surroundings. He’s gone one-on-one with Gordon and Landry and made big-time breakups. He’s moved into the starting lineup and should remain there for years to come.

“He’s as quick as a cat, man,” Gordon said. “His natural ability to recover back to the ball after it’s been thrown, he’s insanely quick, surprisingly fast. He can pop up and come down and knock a ball down even after you think you beat him.”

Defensive coordinator Gregg Williams isn’t one to hand jobs to rookies but said the veterans told him Ward deserved a chance with the first-team defense. Just like last year with No. 1 pick Myles Garrett.

“I do not move them up the depth chart without the understanding of how they are fitting in with the other veterans that play on the field. I do not anoint anybody,” Williams said. “Both he and Myles got the acceptance of everyone faster than most rookies I have had.”

Analysis: Baker Mayfield makes a favorable first impression but has work to do in the pocket
Training Camp Preview: Examining the offense after an offseason full of changes