Shon Coleman determined to be starting left tackle, but the job remains up for grabs 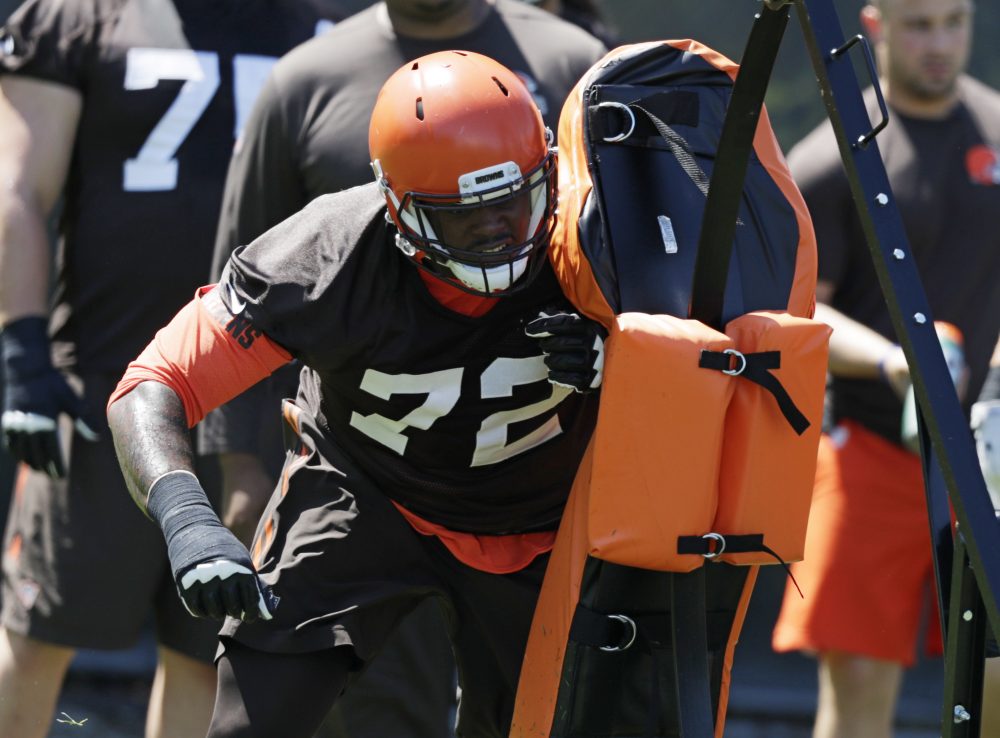 Shon Coleman slid into the vacancy created by the retirement of 10-time Pro Bowler Joe Thomas and spent the offseason working as the first-team left tackle.

He plans to make it permanent.

“Yeah, definitely. I’m not working to be a backup to anybody,” Coleman told The Chronicle-Telegram last week during minicamp. “A great opportunity, I’ve just got to take it and run with it.”


The conviction is admirable, and necessary to succeed at the highest level, but Coleman starting Week 1 against the Pittsburgh Steelers is far from a certainty. From coach Hue Jackson to coordinator Todd Haley to line coach Bob Wylie, it was unanimous the most important position on the line would remain unsettled well into training camp.

“Obviously, we are talking about replacing one of the best players to ever play that position,” Jackson said. “I would not be a very good coach if I did not try everybody over there first before we made that decision.

“We have to make sure that we have somebody that is comfortable that can play that spot that gives us a chance to win games.”

The battle at left tackle is fascinating for several reasons.

At the top of the list is that for 11 offseasons the Browns had no doubt who would protect the quarterback’s blind side. Thomas seized the role as a rookie and never missed a snap until midway through last season.

Whoever assumes the job will feel the weight of being constantly compared to someone seemingly destined for the Hall of Fame. The other candidates are rookie Austin Corbett, the No. 33 pick; undrafted rookie Desmond Harrison, who’s athletically gifted but was out of football for two years in college; and left guard Joel Bitonio, who is a last resort because the move would weaken the interior.

“I have been encouraged with the growth of Shon,” Haley said. “We do have a Plan B, Plan C and potentially a Plan D that we do not even know about.”

Coleman, a third-round pick in 2016, is in a unique spot. He started 16 games at right tackle last year but was a left tackle throughout his high school and Auburn careers. With Thomas’ future in doubt at the conclusion of last year, Coleman spoke openly about his desire to move back to the more natural left side if the opportunity presented itself. Then when Thomas made his decision official, one of the first things he did was train with Coleman.

“I hate saying we can’t have him back next year,” Coleman said. “He’s such a big role model for me and the rest of the O-line, but it’s definitely big shoes to fill and I’m just trying to do whatever I can to do it.”

Thomas worked with the linemen throughout the spring, including attending meetings. He has focused with Coleman on the specifics of pass protection and being more detailed.

“I don’t think it’s intimidating, but it’s definitely a big challenge,” Coleman said of the prospect of replacing Thomas. “He’s held down that spot just like the ironman should.”

Thomas was a technician who spent countless hours perfecting his craft. Coleman (6-foot-7, 310 pounds) is more of a brawler, with concerns about his ability to protect against elite edge rushers.

Right guard Kevin Zeitler lined up next to Coleman for nearly every snap last season and doesn’t think he should be underestimated.

“Shon is a true freak of a man,” Zeitler said. “He’s that type of guy that can pick up a D-lineman and take him 10 yards and throw him. They always say O-linemen should be able to do that, but there’s only a couple of guys who really can do that play after play.

“He has to get used to being on the left side again but he’s working with Joel, who’s one of the best guards in the NFL, and they’re going to be a devastating side when they get comfortable with each other.”

Linemen can’t truly be evaluated without pads, so the real battle won’t start until training camp. But Coleman got a large dose of what to expect by facing off against defensive end Myles Garrett, the No. 1 pick last year.

“Going up against him definitely lets me know what my weaknesses and my strengths are, what I need to work on,” Coleman said. “It’s definitely making me a lot better player.

“I mean, you go up against him and then go against somebody else, you can definitely tell the difference in what type of player you’re going up against. That’s going to be good for me going into the future.”

Garrett had a simple answer when asked about Coleman.

Garrett has a dry sense of humor and likes to needle teammates. After a long pause and a follow-up question, he elaborated on his scouting report.

“He’s definitely a great run blocker and he’s coming along as a pass blocker, as well,” Garrett said. “I like going against him because he’s aggressive and he doesn’t stop. He’s always trying to get after it whether it’s play one or play 40 in practice and I like the intensity and effort he brings.”

The Browns saw Coleman for a season at right tackle and an offseason against Garrett but aren’t ready to declare him the answer at left tackle.

“We will see. We have not played a game with him over there,” Jackson said. “Shon has done a good job. Shon has worked extremely hard. He deserves the right to have this opportunity to see if he can be the left tackle.

“We will know more about that once the pads come on and it is an everyday, get-after-it session.”