Mailbag: Are the playoffs possible? The most indispensable player? Fastest Browns? 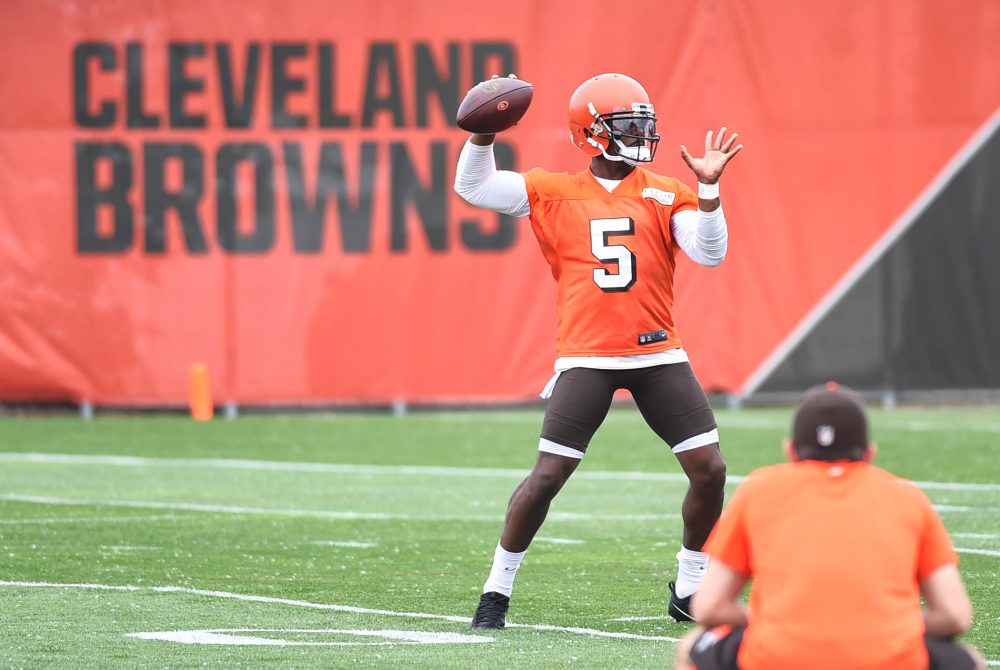 Q: In your opinion, and with your knowledge of the other AFC North teams, is it a possibility that the Browns finish second, or Heaven help us, win the division?

But seriously, your question doesn’t sound nearly as outlandish as it would’ve the last two years — and should coming off 1-31. The Steelers will be the division favorite as long as they have Ben Roethlisberger, Antonio Brown and LeVeon Bell, but the Ravens and Bengals are vulnerable. That’s good news for the Browns, who’ve seemingly forever been relegated to the North cellar.

In order for the Browns to finish second this year, they would need to be around .500. While I won’t rule out anything with Tyrod Taylor at quarterback and the momentum that could be generated from a hot start, I’m not ready to predict seven wins.

As for the division title, I could come up with a scenario in which that happens, but a million things would need to be included, especially key injuries in Pittsburgh.

Q:
I’ve read most of your work and understand that you don’t think the Browns are playoff contenders this year. Perhaps I’m too optimistic but I think if we can avoid injuries, we have a chance. If we aren’t there yet, what moves need to be made to get us there? And why aren’t we doing them? Are we endangered of settling for mediocrity as an improvement over despair?

A: Nice to hear from you, Andy.

The biggest reason I think the Browns aren’t playoff contenders is because I can’t imagine going from 1-15 and 0-16 to 9-7 or whatever it would take to make the postseason for the first time since 2002.

I also have lingering questions about the much improved roster and the ability of coach Hue Jackson to lead a playoff team. My biggest roster concern is what the Browns will do at left tackle without Joe Thomas. And I’m not sure if all the new pieces will be able to come together quickly enough to pile up the victories.

Nothing GM John Dorsey has done or said has made me think he’s hesitant to try to win now. He’s still talking about challenging in the division every year, starting now. And I’m not sure there’s much more he could’ve done to any better overhaul the team in a single offseason. (With the possible exception of throwing a ton of money at free agent left tackle Nate Solder.)

A little more patience will probably be required by the fan base, but I don’t think it’s settling to be happy with significant improvement, which to me is five-to-seven wins.

Q: Based on new player acquisitions, the draft and the hiring of Todd Haley, I believe the Browns are poised for a breakout season. If you had to pick one player that the Browns could not afford to lose to injury in order to fulfill these expectations, who would it be?

A: My readers have a lot of optimism. That’s refreshing.

If you make me pick only one, I’m going with Tyrod Taylor. I don’t think Baker Mayfield is ready to lead a run to the playoffs, and Taylor’s veteran presence gives the team a chance to win from Week 1.

Myles Garrett and Jarvis Landry are next on my list.

Q: Since 2013, the Browns have been in the top six for teams with the most salary cap space. Why is the team not spending and does a lack of spending correlate to a lack of winning?

A: First of all, that’s begun to change under new general manager John Dorsey, who didn’t take long before spending the money of owners Jimmy and Dee Haslam. He took on quarterback Tyrod Taylor’s $16 million contract and traded for receiver Jarvis Landry, then signed him to a five-year, $75 million deal.

But your point is valid, particularly during Sashi Brown’s two years running the football operations. He didn’t re-sign a number of key free agents, then went into full rebuilding mode, which included creating a league-record amount of salary cap space. After the Browns went 1-31 the last two years, I think it’s impossible to argue that spending doesn’t correlate to winning, to at least some degree. The league’s better players cost more money.

I will throw in a caveat. The Browns haven’t had to pay a premium for a quarterback because they haven’t had one worth paying, and an elite quarterback is usually the person who takes up a large chunk of the salary cap space.

Q: Any progress shown from Greg Robinson? Who are the three fastest players on the rosters?

A: Robinson signed after minicamp and won’t practice with the team until training camp, so that’s the first time I’ll get to see him.

Q: If Baker Mayfield moves to Mayfield Road in Mayfield Heights, will the fans call him BM3?

A: Love it. Your first mailbag question was “Super,” and worth the wait.

However, I see Mayfield as more of a downtown/Westlake guy. And I think I’d stay away from any BM nicknames.

Mailbag: What are the team’s strengths and weaknesses? Will Baker Mayfield be the backup? Can Myles Garrett stay healthy?
Mailbag: What’s Tyrod Taylor’s ceiling? When will Denzel Ward and Baker Mayfield sign? Will Hue Jackson survive?