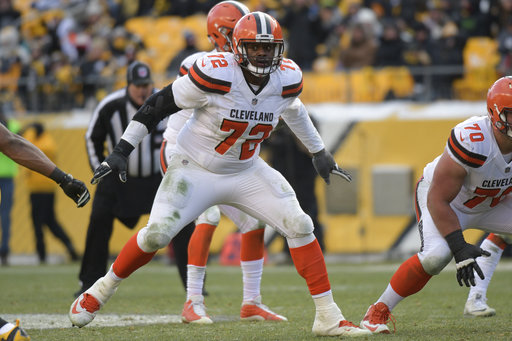 Training camp is the time for position battles. Starting jobs are at stake, as well as spots on the 53-man roster.

For a change, many of the Browns’ competitions will feature qualified participants.

General manager John Dorsey’s roster reconstruction improved the depth and talent, and the changes should be obvious in the quality of camp practices.

Here are the top unsettled positions to pay attention to in the next month. Camp starts Thursday.

Filling the void
Approaching the top of the first hill on a roller coaster. Stuck in a cabin in the woods with Jason Voorhees lurking outside. Turning over the game to the Indians bullpen … before the All-Star break.

Leaving minicamp without knowing the identity of your starting left tackle.

The Browns knew replacing the retired Joe Thomas would be hard. They may not have realized it’d be this hard.

The uncertainty and trepidation were clear when the coaching staff discussed the options at left tackle during minicamp. The impression was confirmed when Dorsey signed Greg Robinson in the days after the final practice before training camp.

Robinson has been a disappointment since being the No. 2 pick of the Rams in 2014.

Shon Coleman is expected to get the first snaps with the first-team offense, but it seems inaccurate to call him the favorite to win the starting job. He’s most comfortable at left tackle but had penalty and pass-protection issues at the easier right tackle spot last year.

“He has the athleticism. We need to keep working on the fundamentals,” line coach Bob Wylie said.

The ideal scenario for the organization would be for rookie No. 33 pick Austin Corbett to seize the job.

He doesn’t have ideal height (6-foot-4) or arm length (33 inches) but was a four-year starter at left tackle at Nevada. The first pick of the second round should be an immediate starter, and left tackle would maximize his value. Robinson (6-5, 330 pounds) provides experienced insurance with 48 starts, the majority at left tackle. Perhaps he can fulfill the potential that made him such a high pick.

If all else fails, left guard Joel Bitonio could be bumped outside, but that weakens a position of strength.

Musical chairs
Four guys for three spots sounds like an episode of “The Bachelorette” or at least “Survivor.” For the Browns, it’s training camp within the linebacker group.

Bring on the intrigue.

Kendricks, 27, came from the Super Bowl champion Eagles and sought a team that would give him playing time so he can earn Pro Bowl recognition. He expects to start, which means an incumbent would head to the sideline.

It’s not an easy decision. Collins and Kirksey signed big-money deals before last season, and Schobert reached the Pro Bowl as an alternate in his second season.

All four will play, but with the influx of quality cornerbacks, defensive coordinator Gregg Williams won’t use three linebackers as often as he did last year. Collins will likely see time at end in passing situations, but Williams will have to choose two from the other three linebackers for nickel packages.

It’s his responsibility to maximize the four guys’ talents by using them in the right spots.

The lead horse
Carlos Hyde was signed as a free agent to replace Isaiah Crowell, who was allowed to reach free agency and signed with the Jets. Then Dorsey drafted Georgia’s Nick Chubb with the No. 35 pick.

Chubb quickly impressed in the offseason, and running backs don’t need much time to get up to speed, so he’s a threat to win the starting job by Week 1. He rushed for 4,769 yards in college with 44 touchdowns and a 6.4-yard average.

Hyde, an Ohio State product, won’t just step aside. He rushed for 2,729 yards in four years with the 49ers, totaling 21 touchdowns and averaging 4.2 a carry. He signed a three-year, $15 million deal with the Browns.

Both will likely get carries early in the season — and Duke Johnson is solidified as the versatile third-down back — so the battle will be for who’s the workhorse.

Hyde could hold onto the role early, only to see Chubb take it as the season progresses.

Up in the air
Jarvis Landry is locked in as a starting receiver. Josh Gordon seemed right there with him until his announcement Monday that he won’t attend the start of training camp. There’s no timetable for his return to the team, throwing the receiving corps into a further state of uncertainty.

With Gordon, Corey Coleman, the No. 15 pick in 2016, is reduced to a backup. That speaks to the disappointment of his first two seasons. He’s flashed top-tier talent on a couple of occasions but has too often been hurt, lazy, out of position and unproductive.

Coleman no longer benefits from being the first draft pick of former head of football operations Sashi Brown. And the most recent — but lasting — memory of Coleman is the fourth-down drop in the finale in Pittsburgh that cemented the 0-16 finish.

Rookie Antonio Callaway is most likely to challenge Coleman for playing time, either as a starter or the No. 3, depending on Gordon’s availability. He has similar size (5-11, 200) and explosion and was picked by Dorsey.

Callaway has first-round talent, but off-field baggage — a suspension at Florida after being part of an investigation into credit card fraud, sexual battery allegations and marijuana issues — made him available in the fourth round. If he can stay out of trouble and on the field — he missed time in the offseason with toe and groin injuries — he’ll force Coleman to raise his game to earn the playing time that was given the last two years.

No competition
I had to include the quarterbacks, strictly out of habit.

While too many training camps over the last 20 years were dominated by a quarterback competition, this one appears to be drama-free. That’s coach Hue Jackson you hear breathing a sigh of relief.

The “Hard Knocks” crew may try to promote or encourage a battle between veteran Tyrod Taylor and No. 1 pick Baker Mayfield, but Taylor only widened the gap with his performance and leadership from the moment he arrived in March.

It’s hard to completely rule out a No. 1 pick, but the momentum is behind Taylor. The organization is committed to winning now, and Jackson was burned the last two years by playing rookie quarterbacks before they were ready. The decision’s been made that Taylor provides the best chance to win, and Mayfield would have to be phenomenal to change minds.

Changing legs
What would training camp be without some sort of kicking competition?

Punter Britton Colquitt set a franchise record last year with a 40.6-yard net and had a career-high 47.6 gross but isn’t guaranteed a job in 2018. Justin Vogel was claimed off waivers in the offseason.

Colquitt missed minicamp following knee surgery. He’s expected to be OK during training camp but might not be 100 percent Day 1. That could allow Vogel to take a lead and gain a foothold.

A battle between punters is a great reason to keep watching in the fourth quarter of preseason games.