Browns have turned page on 0-16, looking to write a new script that includes a trip to the playoffs 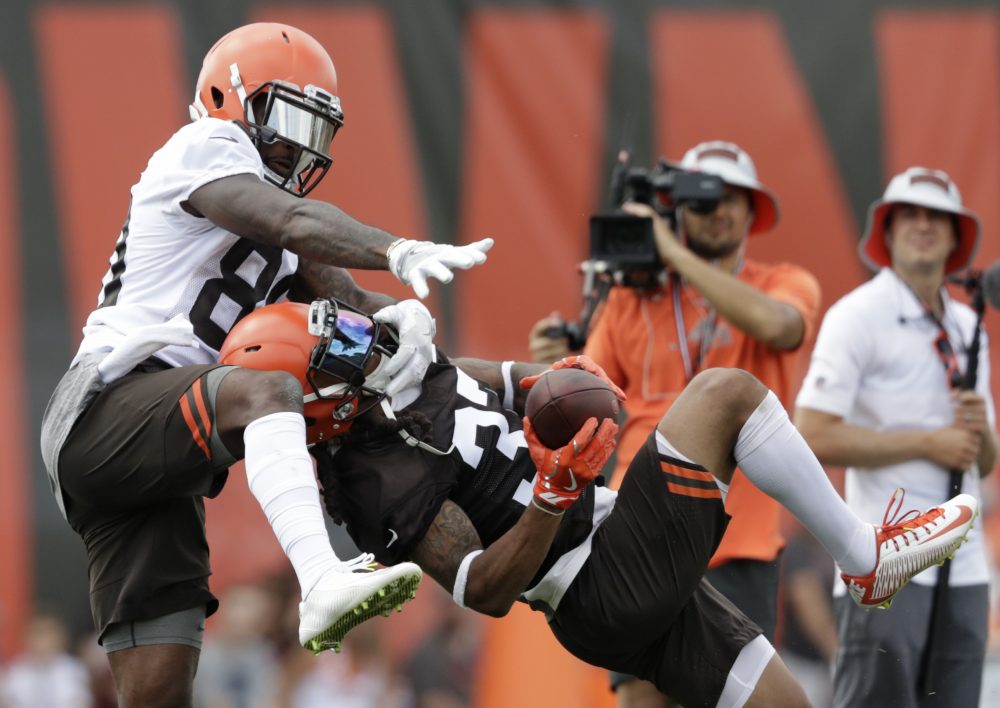 BEREA — The first day of training camp is the ideal setting for optimism.

The Browns began the long march to the season Thursday with their first practice. Whistles and horns filled the air, joined by suggestions of reaching the playoffs and winning a championship.


Receiver Jarvis Landry didn’t live through the winless season of 2017. He came aboard in March after a trade from Miami and didn’t need long before calling the Browns a playoff-caliber team.

He didn’t back down Thursday.

Coach Hue Jackson is 1-31 in two seasons in Cleveland, the worst stretch in NFL history. He hoped his jump into Lake Erie in June served as a cleansing and has moved past only the second 0-16 season in NFL history.

When he addressed the team Wednesday night, he didn’t mention it.

“No, this is not the same team,” Jackson said. “That was 0-16. This is a whole different team. I do not think that I should take them back through that.”

The positive vibes, which were dulled a bit by the absence of receiver Josh Gordon, are rooted in the roster transformation executed by general manager John Dorsey, who took over in December. Through trades, free agency and the draft, he added 20 key pieces to a lineup that could feature 10 new starters.

“I’ll go on record as saying I think what John did when he walked in here with his personnel guys, I think is unbelievable,” Jackson said. “I mean, he totally changed our football team. We have players in the locker room that I think the other players feel really good about and they’re excited about playing with them.”

“Not to knock any of the guys who were here, but John Dorsey did a great job bringing in a lot more talent,” Coleman said. “We got a lot of great guys in the offseason to add to this team and they’re great leaders, they’ve been at winning organizations. They’re bringing their swagger here and we’re just rolling with the punches, younger guys following along, hopping on the train.”

The players who lived through it will always remember the season without a win. The nightmare serves as motivation.

“That’s definitely in the back of my mind. It drives me a little bit, because I’ll never let something like that happen again,” said defensive end Myles Garrett, the No. 1 pick in 2017. “No matter how long I’m here, there will never be a season like that.”

Garrett had a strong start to camp, bursting through the line and into the backfield on numerous occasions. The performance matched his attitude.

“I’m ecstatic,” he said. “I know we can definitely turn things around immediately. It’s all about actions, though. I can’t say we’re going to win all types of games and the playoffs and the Super Bowl, but I know things will be a lot different around here.”

Perhaps the biggest single change is the acquisition of veteran quarterback Tyrod Taylor to be the starter. His leadership and work ethic have been obvious since he arrived from Buffalo in March and included setting up pre-camp workouts for teammates in Los Angeles.

“It’s crazy. Since I’ve been here we haven’t had a quarterback who did that,” said Coleman, who’s in his third year. “That’s how you know a guy like that is a really good leader and he wants to make sure that everybody knows what to do is and doing their job.”

The reversal must include a shift in mindset.

“No matter how good or how bad the season was, this season is a totally new year and be excited about the opportunity we have in front of us to go out and win games, change the culture and change the perception of this team,” Taylor said.

Dorsey will continue to add pieces to the roster, with receiver Dez Bryant a possibility and cornerback Adam Jones coming in for a tryout. But his heavy lifting is finished, and it’s up to the coaches and players to finish what he started.

“It’s my job to acquire the chess pieces and let him go play the game of chess, and he’ll do a pretty good job with it,” Dorsey said of Jackson. “Let’s be competitive week in and week out. Let’s be competitive in the AFC North. There’s talent here. Now they have to come together and understand the task at hand.”