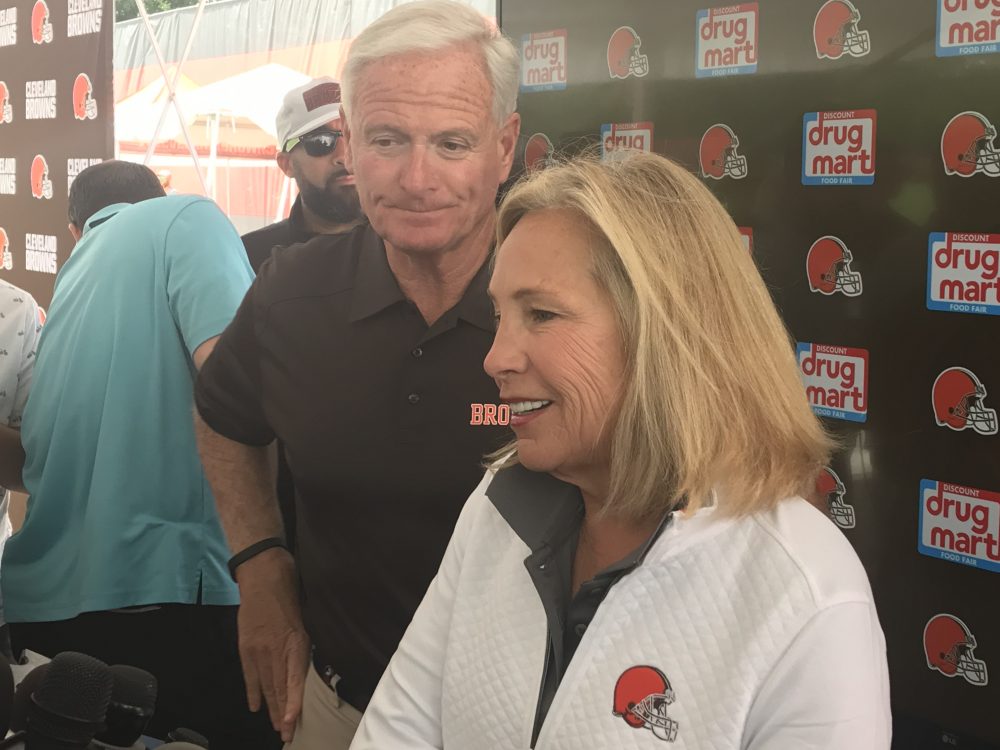 BEREA — The decision was disparaged. The loyalty lambasted. The reasoning ridiculed.

“We’re excited about Hue Jackson,” Jimmy Haslam said Saturday when asked if the coach entered Year 3 on a short leash. “I think our commitment to him has been unwavering and still is.”

The Haslams continue to be second-guessed for retaining Jackson for a third season. He went 1-31 in his first two — including 0-16 last year — the worst stretch in NFL history.

Despite the embarrassment and criticism, the Haslams remain steadfast in their support. Jackson was the third coach they hired, and the first time they got their first choice. They continue to compliment his leadership and coaching ability.

They believe this season is the first time Jackson has been equipped with a roster that can win, which will allow his talents to show.

“I think this will be the first opportunity Hue’s had the opportunity to do what we know he can do as a head coach, as a leader.”

“First of all, I want to thank Dee and Jimmy for saying that,” Jackson said. “As I said all last year, I felt like I had their full support.

“I’m glad they feel that way. My job is to go out and coach this football team and get them better and we’ve got to do it better than we’ve ever done it since I’ve been here.”

The offseason personnel changes made by general manager John Dorsey are the basis for the optimism surrounding the team, and the Haslams’ belief Jackson has a chance to finally flourish. Dorsey, who replaced former head of football operations Sashi Brown in December, added 20 key pieces through trades, free agency and the draft and remade the personnel department.

Dorsey has the experience Brown lacked. He also changed the organizational focus from rebuilding for the future to winning now. That included adding two veteran quarterbacks with winning records and drafting Baker Mayfield No. 1.

Dee Haslam said the expectation for 2018 is “progress,” which she declined to define. Neither owner would venture close to giving a desired win total.

“We’re not going to do anything that’s going to be a one-year flash-in-the-pan,” he said. “But at the same time, we feel pressure to win. We feel the responsibility that we haven’t won before. We feel the fans’ pain, too. Our fans deserve better and hopefully starting this year they’re going to get it.”

STAND BY YOUR MAN II

The Haslams haven’t reached a breaking point with receiver Josh Gordon, who is skipping the start of training camp to focus on his well-being after missing most of the last four seasons on drug suspensions.

“This is a difficult situation. Josh has clearly struggled with addiction, and he would tell you that, over a long period of time,” Jimmy Haslam said. “We’re going to continue to work with the person and try to help him out both personally and professionally until it doesn’t make sense.”

Haslam said he saw a different Gordon in the spring, which contributes to the willingness to support him during another absence.

“Work ethic, attitude, what he was doing off the field,” Haslam said.

He said any decision to sign free agent receiver Dez Bryant as a replacement belongs to the personnel department.

Ownership worked last year to find a compromise with players after a dozen kneeled in prayer during the national anthem before a preseason game. The players were encouraged to record a video promoting social justice and equality, and the organization has hosted a series of social justice summits including Cleveland police.

The league instituted a policy in the spring — Jimmy Haslam sat with Commissioner Roger Goodell during the announcement — allowing players to remain in the locker room during the anthem but forbidding them from protesting on the sideline. The policy was met with resistance by the players’ union, which said it wasn’t included in its formation, and is on hold as the league and union try to find a solution.

“The league and the players’ association are working to come up with a win-win solution and I think there’s cautious optimism on both sides that that will happen,” Jimmy Haslam said. “I do think this conversation is going to be productive and it’s a good thing that happened.”

“There’s no clear-cut answer,” he said. “I don’t think it’s something that you can put a rule on for every single person because everybody’s affected differently by the matter, and for the owners to go out there and try to make a rule without discussing it with the players, it’s tough for us.”

The Haslams touched on a number of other topics.

** The organization’s involvement in a downtown revitalization project that aims to connect the city with the lakefront. Plans could include a new site for FirstEnergy Stadium.

“I think it makes sense to stay there, but it really does depend on what the community wants,” Dee Haslam said of the stadium on the lakefront. “If they want to open the waterfront, they don’t want the stadium there, then we have to come up with another solution. I think they do want it there.”

“There’s no harder worker on our team than Tyrod Taylor,” Jimmy Haslam said. “I knew we were getting a good football player, I didn’t understand what a great person we’re getting. He, alone, has set a different tone.”

“He’s a natural to come in and work with our production people and marketing and sales and we’re excited to have he and Whitney and their three kids here,” Jimmy Haslam said.

** Dee Haslam said there’s been no update if Cleveland/Canton will be picked to host the 2020 NFL Draft.