Hue Jackson: Baker Mayfield has been everything I thought a quarterback should be 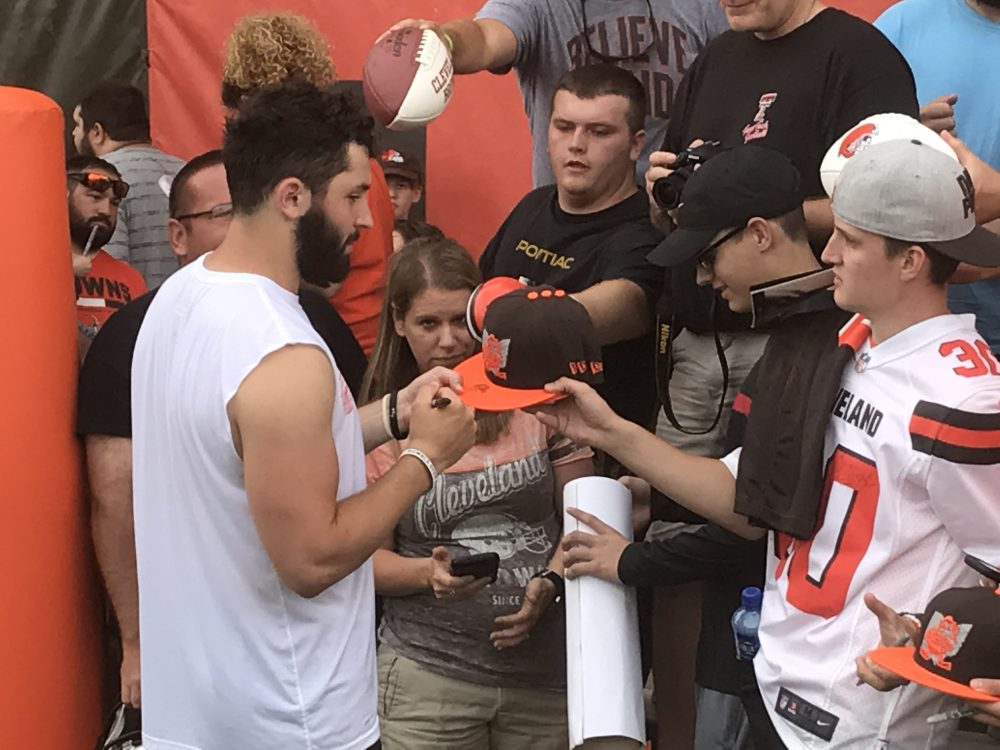 Yes, a four-part TV series about Mayfield hit the airwaves Sunday afternoon — “All the Way Up: Baker Mayfield” on Fox — just as he returned to the practice field for the fourth day of training camp.

No, he hasn’t been the diva many feared after the disastrous two-year tenure of another undersized Heisman Trophy-winning quarterback from Texas (Johnny Manziel).

“He’s an outstanding listener. I mean, Baker Mayfield has been everything I thought a quarterback should be for our organization thus far,” coach Hue Jackson said Sunday after practice. “He’s doing the things that we want him to do the way we want him to do it and he’s exceeding those things because he’s putting in the time. He doesn’t have a pride or (arrogance) any kind of way.

“His thing is, ‘you guys tell me what you need me to do and I’m going to do it’ and that’s what he’s done since he’s walked in the building and that’s exciting, because that’s a player that’s eager to learn.”

Jackson pointed to an “unbelievable” bond Mayfield has with veteran quarterbacks Tyrod Taylor and Drew Stanton.

“I think there’s trust. I think there’s honesty and transparency among that group that they’ve done a great job,” Jackson said. “And when you’re the first pick of the draft and you walk in, normally some guys walk in with their chests out, it’s about me, me, me. He’s not about that. He’s about the team. He’s truly about the football team and about getting better. That’s why I’m glad he’s here.”

Mayfield (6-foot-1, 215 pounds) has worked exclusively with the second-team offense, because Taylor is solidified as the starter. Otherwise, Mayfield has looked like the No. 1 pick he was in April.

He’s thrown several good passes in each practice — Sunday was his best outing — and still doesn’t have an interception. Jackson said Mayfield’s accuracy has always been good but went up a notch in camp due to knowing the receivers better.

“Baker’s deadly accurate with the ball,” Jackson said. “I mean, he threw a ball behind the ear to someone today and it was outstanding.

“He’s seeing the offense unfold a little bit better, because he understands the system better. So he’s making really good progress, which you want to see from your quarterback.”

Mayfield filled up the reporter’s notebook Sunday with good plays. His strong, accurate arm was on display on a 30-yard out to Rashard Higgins off a play fake, a double move to rookie Damion Ratley, a deep back-shoulder throw to Higgins and a go route to Derrick Willies.

“I think our guys have been throwing some pinpoint passes,” Jackson said. “So the receivers, all you’ve got to do is be in the right spot at the right time, they’ll put the ball in places where you get a chance to catch it.”

Stanton, who told Mayfield he needed to rent an RV for the quarterbacks to relax in during camp, said the rookie’s uptick in accuracy is due to a growing comfort level.

“You see that every day. There are certain routes that are asked of you in the NFL that are different than in college,” Stanton said. “He had really good accuracy in college. You can see his arm strength. All those things you look for, he has everything that checks those boxes.

“He’s done a really nice job of coming out here and having control of this offense in a short period of time.”

Mayfield said Thursday before the start of camp that the importance of the mental side in the NFL is underrated, and hoped that would play to his strengths.

“I’ve taken pride in knowing the game so I would hope so,” he said.

Intelligence shows up for quarterbacks first in mastery of the playbook, and Mayfield is learning the lessons taught by Jackson, coordinator Todd Haley and quarterbacks coach Ken Zampese.

“Between Coach Haley and Coach Zampese and my every now and then little prod, he’s done a really good job,” Jackson said. “He spends a lot of time here in the building. To me, him and Tyrod probably should just sleep here. These guys are here 24/7, doing everything they need to do along with Drew.”

Mayfield said he was looking forward to camp because it would be a review of the material learned in OTAs and minicamp.

“That’s the difference between a good quarterback and a great quarterback, it’s little details on each play,” he said.

Stanton said the true measure of a quarterback is what his teammates think of him.

“You need to be able to take those guys and make them play better than they think they’re capable of and he has those things,” Stanton said. “You can see those little things — the authenticity behind the way he goes about his work and the way he acts. I think that’s what separates him from most.”