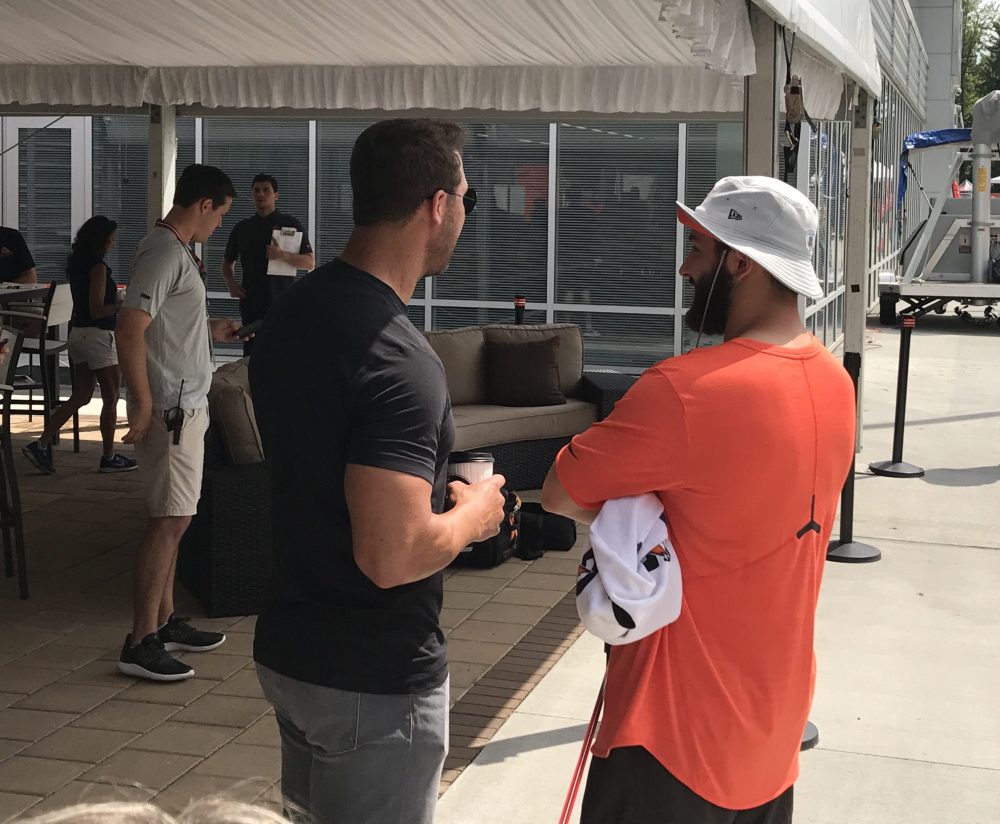 He could’ve said: Be careful what you wish for.

The last two quarterbacks picked No. 1 by the Browns met Monday afternoon. Mayfield, the rookie, had just finished his interview with reporters when he crossed paths with Couch, the No. 1 pick in 1999 who will be the TV analyst on Cleveland’s preseason broadcasts.

“I would just tell him to be patient,” Couch said. “I know he’s had so much success coming off a Heisman Trophy year and all the things he did at Oklahoma, a record-setting career. I’m sure he expects to walk right in here in the NFL and then have that type of success and I did, too. I think every high draft pick thinks that. But this is a rebuilding football team. Are they better than they were a year ago? Absolutely. There’s so much more talent on this team than there was a year ago.

“But still, you just have to be patient and don’t expect too much too soon. He’s got a great situation to learn from Tyrod (Taylor), and I think he needs to take advantage of that.”

Mayfield and Couch entered the league under similar circumstances.

Couch put up huge numbers in the Southeastern Conference and was fourth in the Heisman Trophy voting before the Browns chose him out of a crowded quarterback draft class. He joined an expansion franchise that had gone three years without a game and opened the season as the backup to veteran Ty Detmer.

Mayfield posted record statistics in the Big 12, won the Heisman and won over the Browns’ decision-makers. He was chosen ahead of much taller passers Sam Darnold, Josh Allen and Josh Rosen, who were drafted within the first 10 picks. The Browns are coming off 1-15 and 0-16 seasons, and Mayfield is slated to sit behind Taylor.

Mayfield has never hid his desire to play but continues to say the right things and follow the blueprint set by the organization to bring him along slowly. Couch was part of a similar plan — until Detmer and the Browns got beat 43-0 in the opener and Couch was named the starter for Week 2.

He wanted to play but acknowledged it was a panic move by the organization.

“I felt like I was ready. But I wasn’t,” said Couch, who went 2-12 and was sacked 56 times in 1999. “You were coming into an expansion team. The expectations were so high on the No. 1 draft pick, quarterback coming in from the fans, the media, even your own teammates. They’re expecting this is going to turn this thing around, get us in the right direction. When it doesn’t happen, things can go south pretty quickly.

“You lose your confidence. The fans’ expectations are shattered. Your teammates are looking at you sideways and thinking ‘What’s going on with this?’”

He noted there are a lot of examples of rookies who succeed right away — Ben Roethlisberger, Russell Wilson, Carson Wentz — but said the key is the situation. The quarterback wasn’t asked to resurrect the franchise by himself.

“Having success as a quarterback is right time, right place,” said Couch, who watched his first Browns practice Sunday since being cut by Butch Davis after the 2003 season. “You have to have enough talent around that guy before you put him in that situation because there’s so much pressure being the No. 1 pick anyway.”

General manager John Dorsey has rebuilt the roster, but questions remain at receiver, tight end and left tackle. Some of the players are talking about making the playoffs, but the jump from winless to the postseason is one no team’s made in a season.

“Baker coming in as the No. 1 pick, people think this is the guy that’s going to turn around the franchise and finally solve the quarterback issue they’ve had here for a long time,” Couch said, referring to the 28 who’ve started since 1999. “That’s a lot of pressure for a young guy to deal with.

“They have a lot of talent right now, but they need to keep stockpiling talent like they’ve done this offseason and put Baker in spots where he can be successful.”

Mayfield has been impressive early in camp, and coach Hue Jackson said Sunday that he has exceeded expectations.

“That’s exciting to hear, but that does not mean I’m satisfied,” Mayfield said. “I always say that I set my own expectations, set my own standard, and I have to live up to that. I’m not done working.”

Mayfield hasn’t thrown an interception through five practices and has been more patient in the pocket than during OTAs and minicamp.

“I would have kind of a general grasp of the plays and the concept where I’d go through one read, maybe two, and then if he wasn’t open it was kind of like an ‘oh, crap’ moment, flustered and get out,” he said. “But now I’m trying to put those pieces together to where I go through those reads, I’m settled in the pocket, I trust my protections, I’m trusting my guys to get to where they’re supposed to be. That’s the progress I wanted to make, so I want to continue to do that, continue to get more comfortable.”

Couch complimented Mayfield’s arm strength and quick decision-making in practice and warned that the best-laid plans don’t always work out.

“If (Taylor’s) not playing up to expectations and they’re not winning football games, the pressure is going to be so intense to put Baker on the field,” Couch said. “That’s something they’re going to have to deal with as the season goes on. Hopefully the ideal situation happens where Tyrod is playing well, they’re winning games and Baker can sit and he can learn and they can put him in in situations throughout a game, maybe have a package for him where can come in and he’s very comfortable running those plays and just kind of introduce him to the game that way.”

“I don’t have temptation,” Jackson said. “Baker Mayfield’s doing great, Tyrod Taylor’s doing great. This thing’s going to play out just like I told you it would. I’m not changing.”