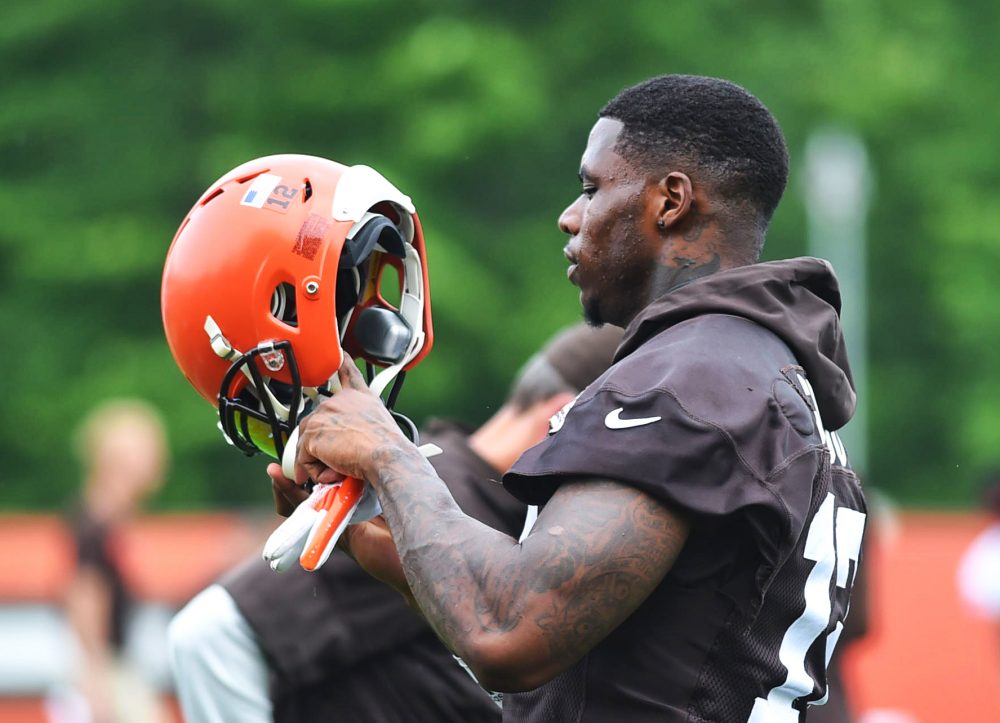 Q: Concerning Josh Gordon, I’m wondering if this whole I’m not gonna show during the preseason thing is salary-related. Gordon is making $790,000 this year. Meantime Jarvis Landry is making over $15 million. So my real question is, how come general manager John Dorsey didn’t rework Gordon’s contract with multiple performance clauses built into his contract? It really seems like the fair thing to do.

A: This begins a string of questions about Gordon. His absence has been the biggest story of camp and will be until the uncertainty surrounding his availability for the season is resolved.

The many theories I’ve seen and heard about Gordon’s decision to skip the start of camp range from laughable to plausible, and the money theory strikes me as believable on that scale. I’m sure Gordon thought he’d have a big-money contract by now after his All-Pro season of 2013, but his repeated suspensions robbed him of that chance — and the opportunity to reach free agency.

I believe he needs money after not getting paid for all of 2015 and ’16 and would love a new deal with some guaranteed money upfront. But I don’t blame Dorsey one bit for not reworking Gordon’s deal. Gordon has done little to prove he’s reliable, and his latest absence — even if driven by money — doesn’t help.

I would consider a new deal for Gordon only if he returns in a timely fashion and is dependable for a full season. Even then, the contract would have to protect the team.

Q:
Any news on Josh Gordon rejoining the team?

A: Nope. The team is waiting, and the league still hasn’t put a timetable on a return.

Q: Rumor is Josh Gordon is missing camp because of “Hard Knocks” … Is that true?

A: I’ve heard this rumor and it might be true, but it doesn’t pass the sniff test for me.

As Gordon was trying to return to the NFL last season, he sat down with multiple outlets for in-depth stories chronicling his life of addiction, so he’s not bashful. He also spent much of his comeback trying to sell merchandise.

So my feeling is Gordon, and his marketing people, would’ve appreciated the time in front of the camera.

Q: If you had to say which aspect of the team is most improved over last season, setting aside QB, what would you say? Cornerback? Coaching staff?

A: John Dorsey felt cornerback needed the most improvement, outside of quarterback, retooled it completely and continues to add to the position and consider further upgrades.

With No. 4 pick Denzel Ward limited early in camp, although not on the official injury report, we haven’t seen the full complement and I’m not ready to say the position is fixed. Even without Josh Gordon, I’ve seen too many receivers running open against TJ Carrie and Terrance Mitchell, candidates to start opposite Ward.

But I’m assuming in the regular season cornerback will be the biggest difference from last season.

Coaching staff — offensive coordinator Todd Haley and receivers coach Adam Henry — and running back are also candidates. Dorsey’s moves at other positions were more about depth.

Q: How has Emmanuel Ogbah looked in practice so far? Hoping he will be healthy and in beast mode.

A: He’s looked good. Ogbah is recovered from the broken foot that sidelined him last season and the Browns are expecting big things from him in his pairing with fellow defensive end Myles Garrett. I’ve seen Ogbah in the backfield on multiple occasions and he’s in a daily battle with right tackle Chris Hubbard.

Q: Does TJ Carrie look like he’s winning the CB2 spot, or does it look like nobody is jumping out?

A: Carrie has been running with the starters, but as I referenced above, no one has separated himself for the second starting spot. I expect Carrie to keep the job but be pushed by E.J. Gaines and perhaps Terrance Mitchell.

Q: Where is Nick Chubb in the running back rotation? Running with the twos or threes?

A: Chubb has been getting snaps with the second team and has been impressive. Until the preseason games, it’s impossible to know how the carries will be divided once the season arrives. But I fully expect Chubb to get his share early, with the workload increasing as the season progresses.

Q: How’s Damarious Randall looked at free safety so far? Is he that much better than Jabrill Peppers at free safety? Peppers had a good camp and good preseason last year, then unfortunately the regular season started and he was moved 30 yards off the line of scrimmage. But the point is why can’t Peppers win the free safety job again? Play him and Derrick Kindred with better cornerbacks this year.

A: The trade for Randall was made with the express purpose of moving Peppers to strong safety, so I don’t see any reason to change the plan. Randall has been solid in camp and I don’t recall many, if any, balls going over his head.

Peppers’ struggles last season were largely the result of his unfamiliarity playing deep center field. He feels his instincts will show up more near the line of scrimmage, and the belief is that turns into the same playmaking ability he demonstrated at Michigan.

There’s nothing wrong with having three quality safeties, and I’m sure coordinator Gregg Williams will have packages to include Kindred, who’s like an extra linebacker when he blitzes against the run.

Q: Who’s looking like they will be getting the first-team reps for linebackers?

A: It’s too early to tell, because Jamie Collins and Mychal Kendricks have been limited, especially in team drills.

But my expectation is that middle linebacker Joe Schobert will see the most playing time. He had a “breakout” season in Year 2 and the coaches love his intelligence and athleticism. Collins’ versatility and pass-rushing ability should keep him on the field plenty, with Christian Kirksey and Kendricks fighting for what’s left.

Q: Any keen observations concerning the defensive backfield? Every video I see shows someone getting torched.

A: I don’t know how keen … but it looks to me like the secondary is still finding its way. Cornerback Denzel Ward hasn’t taken a ton of team reps and strong safety Jabrill Peppers didn’t practice until Monday because of a groin injury. When those two get going full time, I expect the secondary to pick up steam.

In the meantime, it would be helpful if the rest of the cornerbacks played better. Too many times the wideouts have gotten behind cornerbacks TJ Carrie and Terrance Mitchell. I haven’t noticed cornerback E.J. Gaines much, which is a good sign. I will say this, the corners have won their share of battles. There was a one-on-one receiver-cornerback drill the other day in which there were about a dozen straight incompletions, and that’s extremely rare for that drill.

Q: Is this the busiest offseason/training camp/preseason the Browns have ever had? It feels like the team makes a move every five minutes just to prove the people in the front office still exist and still have a job. Where does this rank with previous years?

A: Every offseason is full of roster moves, and the number climbs when a new front office is in charge. But the turnover this season has risen to a level I don’t believe I’ve seen in awhile. I haven’t done the research, but the last time there might have been this many changes was when Eric Mangini took over. He wanted “his guys” and proceeded to dismantle the roster, but I’m not sure to this degree.

While I get your point, most of new general manager John Dorsey’s moves were made early in the offseason through trades and free agent signings. The additions of linebacker Mychal Kendricks and left tackle Greg Robinson in June were noteworthy, but since then the transactions have been routine. Every team switches out the bottom of the roster throughout camp, and even into the season.

Q: Trade proposal: Jamie Collins to Oakland for Khalil Mack. One is under contract long term; the other wants to be paid, the team who controls him seems cash-poor and the Browns have plenty of cash and cap space.

A: The Browns would do that in a heartbeat. Mack was Defensive Player of the Year in 2016 and has been to three Pro Bowls in four seasons. He’s elite. Collins has immense talent but has lacked the impact and consistency of a player with his potential and contract.

A trade would only be remotely conceivable if the Raiders gave up any hope of reaching a contract agreement with Mack. I don’t see that happening, but if it does, the Browns should make a call.

Q: Why haven’t the Browns considered reaching out to Seattle about a possible Earl Thomas trade?

A: I can’t say for sure the Browns haven’t reached out, but it appears they’re content with Damarious Randall and Jabrill Peppers at safety. Plus, all the momentum seems to be behind Thomas going to the Cowboys.