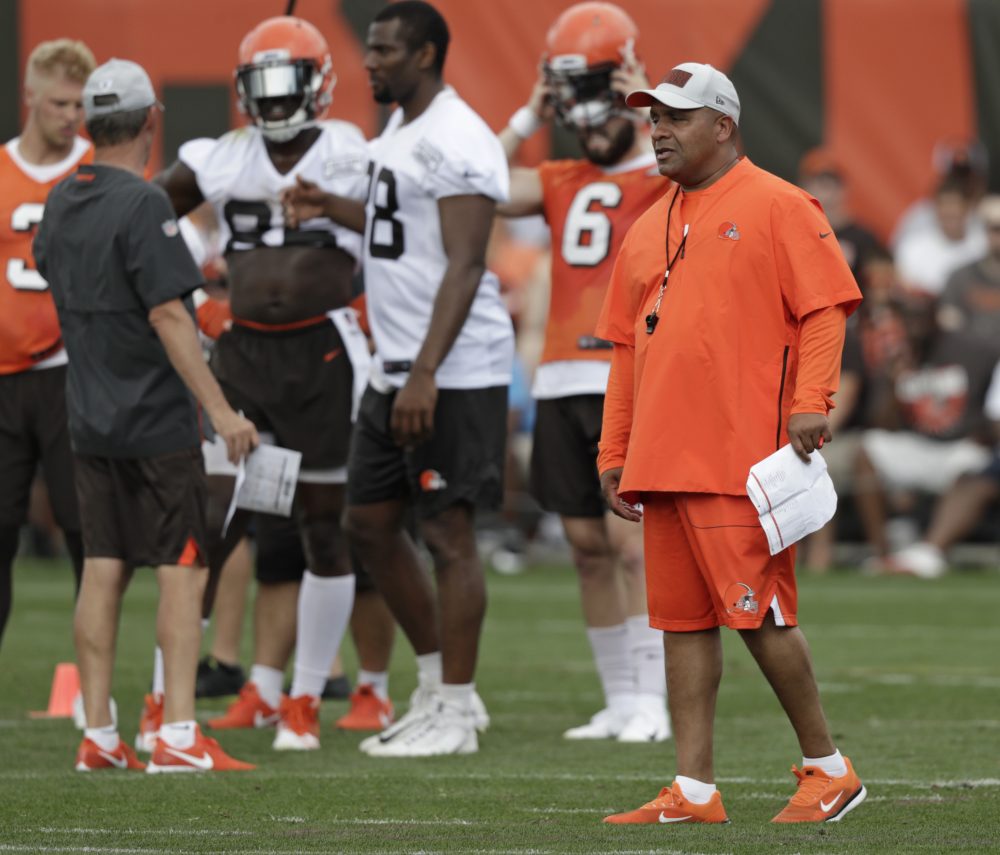 BEREA — Hue Jackson is coaching with a heavy heart.

His brother John Jackson Jr. died two weeks ago, then his mom, Betty Lee, died Sunday in Los Angeles after a long illness, a team spokesman confirmed Wednesday. She was 83.

Cleveland.com was first to report the news.

Jackson, 52, hasn’t missed a practice since training camp started July 26 and didn’t say anything about the difficulties in his personal life during his daily meetings with reporters.


His agent, John Thornton, said he was dealing with things “internally.”

Jackson is expected to remain with the team through the preseason opener Aug. 9 at the New York Giants, then go see family. Details for the services hadn’t been finalized.

“It’s been really tough on him,” Thornton told cleveland.com. “He’s just trying to let football help him out.”

Making matters even tougher, the “Hard Knocks” cameras are with Jackson throughout the day, leaving him little privacy.

When cornerback TJ Carrie signed a four-year, $31 million deal in March to join the Browns as a free agent, the expectation was he would start. After an up-and-down start to camp, Carrie found himself with the second team Wednesday. Rookie Denzel Ward and veteran free agent acquisition Terrance Mitchell (three years, $10 million) were the starters.

“Very competitive, man,” Carrie said of the cornerback group before practice. “It can always put you on eggshells if you’re not making plays days in and days out. Our room is so talented that you don’t know what’s going to happen within that depth chart, so you always have to bring your A-game every day.”

Carrie was more than impressed by LeBron James’ I Promise School that opened Monday in Akron.

He was inspired to do more to help those in the community.

“LeBron has done an amazing job with him being here in the state of Ohio, period,” Carrie said. “And I think that’s another one of the pieces that you can add to the resume on how he’s trying to give back to the community that he’s grown up in, the community that he’s been so involved in and I think it sets precedents for what we should do as athletes on how we are a role model to a lot of kids that we may not know, that we may not see but that know us.

“So big ups to LeBron for doing that and I think it just adds to another level of expectations. Are we doing enough?”

That Carrie would ask the question shows his concern for humanity. He established the TJ Carrie Foundation in 2016 when he was with the Oakland Raiders to help youth discover their greatness through health, education and community programs and events.

Rookie defensive end Chad Thomas, a third-round pick, had surgery in June to fix a sports hernia and missed minicamp and the start of training camp. He said he had been dealing with it since his junior season at Miami in 2016 and was hesitant to have the procedure.

“I would be lying if I said I was all behind it, but it was kind of a mental thing I had to really think about and then I had to be a grown-up and think it’s a business, so let me just get my body right at this moment and not wait until later because it will probably get worse,” he said.

Offensive coordinator Todd Haley screamed at a member of the defense who hit veteran quarterback Drew Stanton’s arm as he was throwing.

“I went to go talk to the defense,” Jackson said. “I do not think anything is ever intentional, but we just have to be a smart football team.

“We can’t get that close. If you think that you are getting close, just pull off and go the other way. We can’t take a chance of injuring any of our quarterbacks by doing things that are not good.”

Tight end Devon Cajuste caught two touchdown passes from Stanton in his return from a concussion.

** Ward, the No. 4 pick, had a nice breakup in the end zone on a pass from Tyrod Taylor to rookie receiver Antonio Callaway. Ward saw increased practice time after being limited early in camp.

** Former NFL players Steve Smith and Willie McGinest were on site with NFL Network. McGinest played for the Browns from 2006-08.