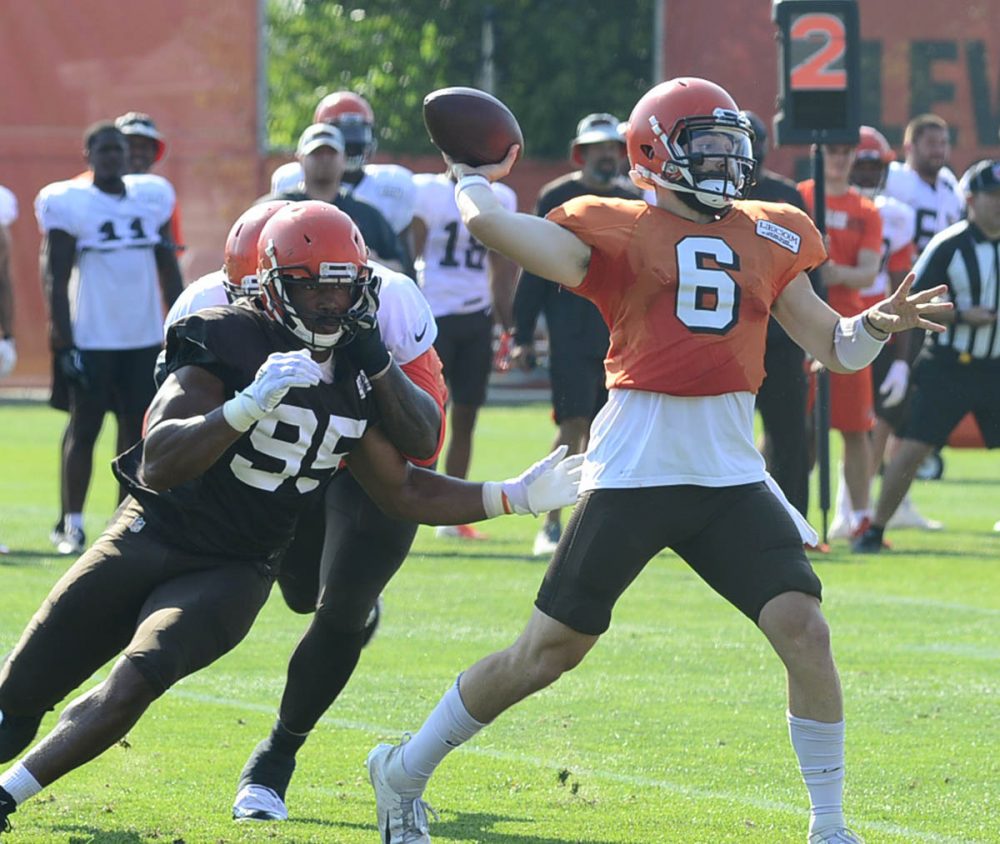 BEREA — Baker Mayfield gave the fans something to cheer right away with a touchdown drive Friday to open the intrasquad scrimmage.

The rookie No. 1 pick gave the coaches something to correct with his first interception of training camp, on the eighth day.

Overall, the passer from Oklahoma got a passing grade. He’s been getting a lot of those.

“He did get off to a hot start and led the team down there to score, but that is what we expect,” coach Hue Jackson said. “He threw some good balls. The guy is throwing the ball extremely well, and I think that you guys see the accuracy. He had a good day.”

Mayfield opened with the ball and led the second-team offense against the second-team defense. He threw a beautiful fade pattern down the right sideline to receiver C.J. Board for 30 yards, then stepped up in the pocket and hit tight end Devon Cajuste for 29 yards to the 1-yard line. Rookie Nick Chubb ran in for the touchdown.

“The first drive today I think spoke volumes,” Landry said. “He made a lot of plays, especially the one toward the end when he stepped up in the pocket and hit the tight end down the middle. Just goes to show, he could’ve run that ball but he’s got guys open downfield and he wants to make plays downfield with his arm as well. So he’s done a great job.”

Mayfield’s afternoon peaked early. He completed just one more pass, a 12-yard out to receiver Jeff Janis in a two-minute drill. Two plays later his streak without an interception ended.

End Myles Garrett applied pressure, tackle Jamie Meder tipped the pass and linebacker Jamie Collins caught it. Mayfield had been late on a pass to the sideline to open the series and was nearly intercepted.

The scrimmage finished with Mayfield taking two sacks in a goal line drill, but Jackson disputed the notion his performance went downhill.

“No, people would feel that way because of the goal line stuff when guys are coming at him,” Jackson said. “That was my point about him still understanding that you have to throw the ball away. What our defense does down there is tough. We are not game-planning our defense right now.”

Jackson has been adamant that Mayfield will open the season as the backup to Taylor. But Jackson said Mayfield’s exceeded expectations, and some outsiders feel he’ll make a push for the starting job sooner rather than later.

Mayfield’s quick release and decision-making and impressive accuracy have been on display consistently throughout camp. Garrett, the No. 1 pick last year, sees him as a dual threat.

“I saw him in college. He’s kind of like when Johnny (Manziel) was in college. He could escape and get away from people. I think he has that same kind of shiftiness. I think he uses it to his advantage, but I don’t think he relies on it.”

Baker Mayfield makes a birthday special while renting RV from Neff Brothers in Lorain
Driven to succeed and learning from the best, DT Larry Ogunjobi says he’s ready to step into starting role