Tyrod Taylor, Jarvis Landry connect for 2 TDs, including a spectacular one, in scrimmage 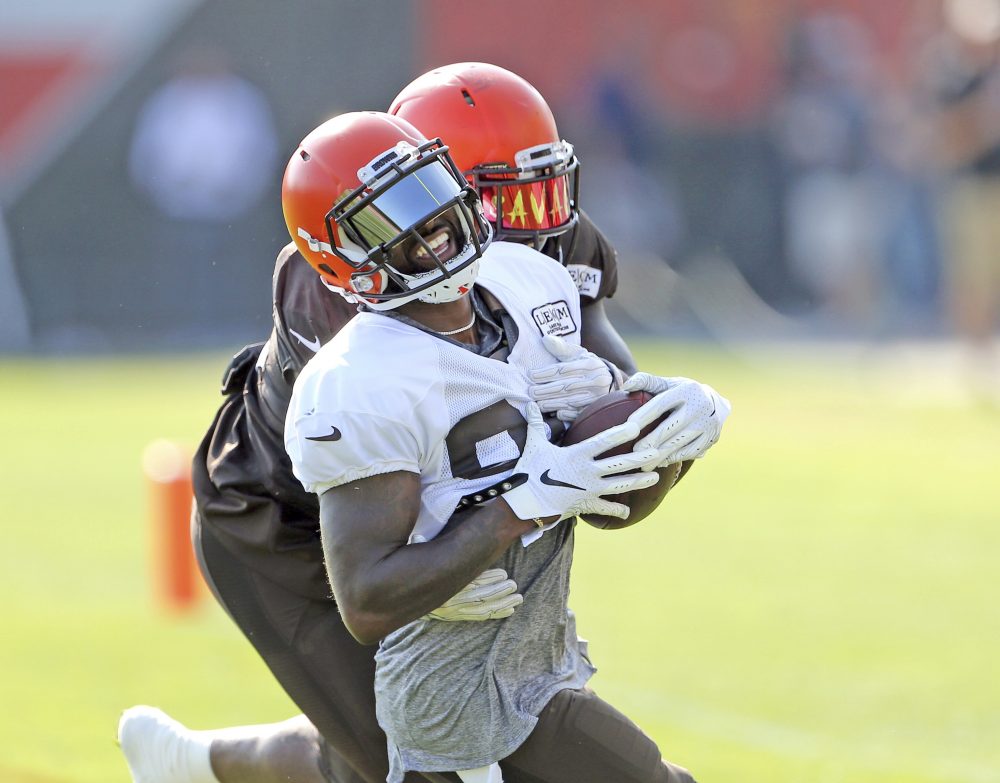 BEREA — Jarvis Landry reached behind him with his left hand, snatched the football like it was a tennis ball, spun away from safety Elijah Campbell, dismissed linebacker James Burgess with a shove and ran into the end zone.

Then the receiver fired the ball into the bleachers.

The offense and defense provided plenty of big plays during an intrasquad scrimmage Friday — including a touchdown and interception from No. 1 pick Baker Mayfield — but the Tyrod Taylor-to-Landry connection stood above the rest.

Two of the most significant offseason additions — and biggest reasons for hope of a quick turnaround — gave the sweltering fans plenty to smile about.

Taylor found Landry running open down the right seam for a 26-yard touchdown against the second-team defense. Taylor was 4-for-4 on the drive, connecting for 16 yards with tight end Darren Fells, 11 with receiver Corey Coleman and 21 to tight end David Njoku.

“He moved the team,” coach Hue Jackson said. “He made some plays down the field with the ball. He threw the ball around. Tyrod did some good things out there.”

“Everything you ask for from a starting quarterback,” Landry said.

The second touchdown from the starters came in a two-minute drill. Taylor threw 22 yards to Duke Johnson on an in route, then threw to Landry down the right seam for the spectacular 36-yard score that qualified as the play of the day.

“He does it every day,” Jackson said. “If the ball is anywhere around him, there is a good chance that he is going to come up with it.”

Is there any catch he can’t make?

“I don’t believe there is,” Landry said. “I pride myself making any type of catch, any way. We call it catch radius and any ball thrown to me is a good ball.”

Taylor and Landry were acquired in trades on the first day of free agency, as general manager John Dorsey began reshaping the roster. In addition to their time together at the team facility, they practiced in Florida and California during their breaks.

The chemistry project has paid dividends through the first week-plus of camp, with Landry a reliable target for the starting quarterback.

“I pride myself on trying to learn the game as a quarterback’s learning,” Landry said. “I try to spend as much time as I can with Tyrod and just kind of learn from my mistakes. I think that has helped us be on the same page, and when you’re on the same page with the quarterback, you’re highly likely to get the ball. And from there it’s just making the plays and building the trust.”

Taylor led two touchdown drives and a field-goal drive. Mayfield started the scrimmage with a touchdown drive with the second-team offense vs. the second-team defense. He made a great throw down the right sideline to receiver C.J. Board for 30 yards and stepped up in the pocket to deliver a 29-yarder to tight end Devon Cajuste to the 1-yard line.

Rookie running back Nick Chubb finished the drive with a short touchdown.

The defense made its share of plays in the scrimmage that featured tackling of everyone but the quarterbacks. It forced a three-and-out in the only series between first-team units and won the goal line drill.

Individually, linebacker Jamie Collins had an interception and a breakup in the end zone. Linebacker Christian Kirksey exploded through the middle and caused a fumble on an unsuccessful handoff from Mayfield to running back Dontrell Hilliard. Defensive tackle Jeremy Faulk and linebackers Mychal Kendricks and Joe Schobert had tackles for loss. “Everybody was getting their hands up, hands on the football, whether it was PBUs or interceptions and rushing well and tapping off the passer,” said defensive end Myles Garrett, who got pressure on Collins’ interception. “I feel like those are signs of a great defense if you can get after the passer and take the ball away.”

No one has stopped Landry in his first months with the team. He’s clearly the best receiver in Josh Gordon’s absence, showing a useful combination of precise route-running and vise-grip hands.

He catches 200-300 balls a day on the JUGS machine, and the work is obvious when he routinely plucks the ball out of the air with one or two hands.

“So I like that — that kind of confidence and that demeanor he brings to the field. He definitely brings a kind of swagger to the offensive side.”

Hue Jackson trying to focus on fond memories, relying on support of organization after deaths of mother, brother
(UPDATED) Browns won’t penalize Josh Gordon if he misses contractual deadline to report; focus is on him getting healthy