Driven to succeed and learning from the best, DT Larry Ogunjobi says he’s ready to step into starting role 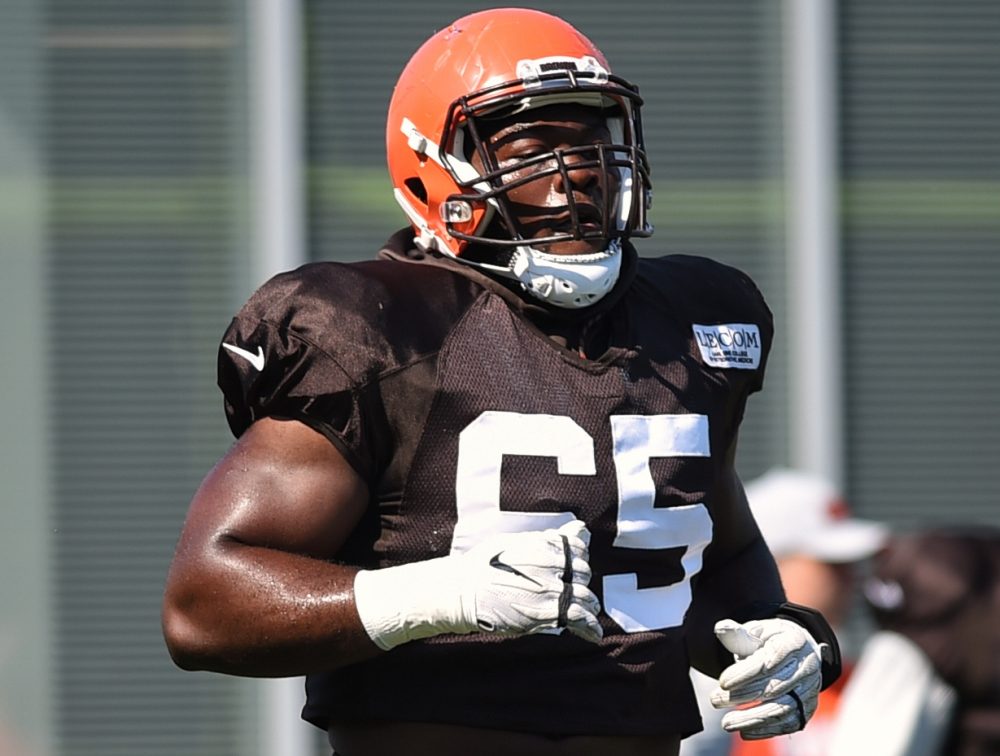 He entered the weekend in prime position to secure a starting spot heading into the regular season.

Returning starter Trevon Coley will miss the preseason and his availability for the season opener Sept. 9 against Pittsburgh is in doubt because of a high ankle sprain. Ogunjobi had been pushing Jamie Meder for the starting nose tackle job (over the center) but will likely slide over to the three-technique (between the guard and tackle) in Coley’s absence.

Ogunjobi started one game as a rookie last year. He played three years of high school football, only starting as a way to lose weight after he had ballooned to 350 pounds as a 16-year-old. He helped open the University of North Carolina at Charlotte program and was its first alumnus drafted, leading off the third round as the No. 65 pick.

Despite the humble beginnings and limited experience, Ogunjobi feels ready to be an NFL starter.

“Just because I feel like there comes a time in every man’s career that you want to go out and chase something,” he said. “Everything was impossible until somebody did it.

“I know the hours that I’ve put in may be more than somebody who started playing (before) me. Because this is not only something that I love doing but just what I want to do for the rest of my life.”

Ogunjobi (6-foot-3, 295 pounds) said shifting between the tackle spots won’t be a problem. He played nose tackle at Charlotte, worked at the three-technique last year and feels comfortable at both.

“The way the coaches see me, they feel like I have the ability to play both positions, because I can,” he said. “So whatever they need me to do, I’m more than happy to do.

“Whether it’s interior pass rush or stopping the run, I feel like I’ve been able to take both of those positions, just merge them into one.”

His confidence in his ability to play the three-technique is based in his work with Bengals six-time Pro Bowler Geno Atkins. They’ve trained together in the offseasons and Atkins has become a mentor.

The relationship was forged out of Ogunjobi’s mission to get ready for the NFL. After he was drafted, he called a training facility in Atlanta so he could be around NFL plays.

“I kind of just went out on a limb, got my hotel room, booked a rental car, got a flight and just shot out to Atlanta,” he said. “I did not know if Geno was going to even rock with me or was going to help me out, but he welcomed me with open arms and that’s been like my big brother ever since.”

Ogunjobi sends his film to Atkins for a critique and calls often for advice, including during the grind of training camp. They talked for an hour Friday night.

“I’m always one that believes that pride comes before the fall,” Ogunjobi said. “This is really like an egotistical game, a lot of guys don’t want to ask for help, but I’m more than welcoming to it. Because I have a lot to learn, I want to learn.

“If I want to be the best version of myself and the best possible player I can be for my team, then I feel like I have to ask questions.”

“What a guy to pattern your game after,” coach Hue Jackson said. “Geno is a tremendous football player and person.”

“He’s leaps and bounds different from where he was last year,” Simmons said. “More confident, understanding more about the game of football, about leverage, about hand placement and about being a defensive tackle in the NFL.”

The jump to the NFL didn’t overwhelm Ogunjobi, even though the adjustment was large coming from a small school. He quickly proved to himself he had what it took to survive, totaling 32 tackles in 14 games with a sack.

“I feel like I bring a difference at the nose guard position, just because I feel like I was a lot quicker than the centers and a lot stronger than the people I was going against,” he said.

He certainly isn’t the typical nose tackle at 295 pounds, about 50 less than Danny Shelton carried last year as the starter before he was traded to New England in the offseason. Ogunjobi compensates with a chiseled frame and a fast first step to get into the backfield.

“They’re used to space eaters, people who try to eat up blocks,” he said. “I don’t really like doing that. I like making plays, helping my team find ways to win.”

In addition to Atkins, he texts the Rams’ Aaron Donald and studies film of the three-time All-Pro and reigning Defensive Player of the Year. Ogunjobi tries to learn from both their styles.

“Geno, he’s more of a powerful interior rusher, quick hips. Aaron’s got them both,” he said. “Aaron can kind of hit you with a finesse move, but then he can also drive you 5 yards in the backfield and make a TFL.”

Fifteen minutes talking to Ogunjobi is plenty to appreciate the lofty expectations he’s set for himself.

“I feel like the only thing that can stop me from doing what I want to do is me,” he said. “I just always had that chip on my shoulder because it wasn’t really about proving anybody wrong but proving myself right. When you have that self-belief and that understanding that hard work and dedication can get you where you want to go and then you keep pushing and you keep chopping that wood, eventually that tree’s going to fall.”

“He has that determination, and if you couple that with discipline and desire, good things happen,” Jackson said.

Standing out as an interior lineman isn’t easy, but Ogunjobi’s quickness has been on display in the first week-plus of camp with repeated penetration into the backfield. He knows he isn’t a finished product but is determined to get there.

“I feel like when I’m at the best version of myself I think it will be really exciting for everybody,” he said.