WR Jarvis Landry won’t take whole day off, so coaches settle for a TD then some rest 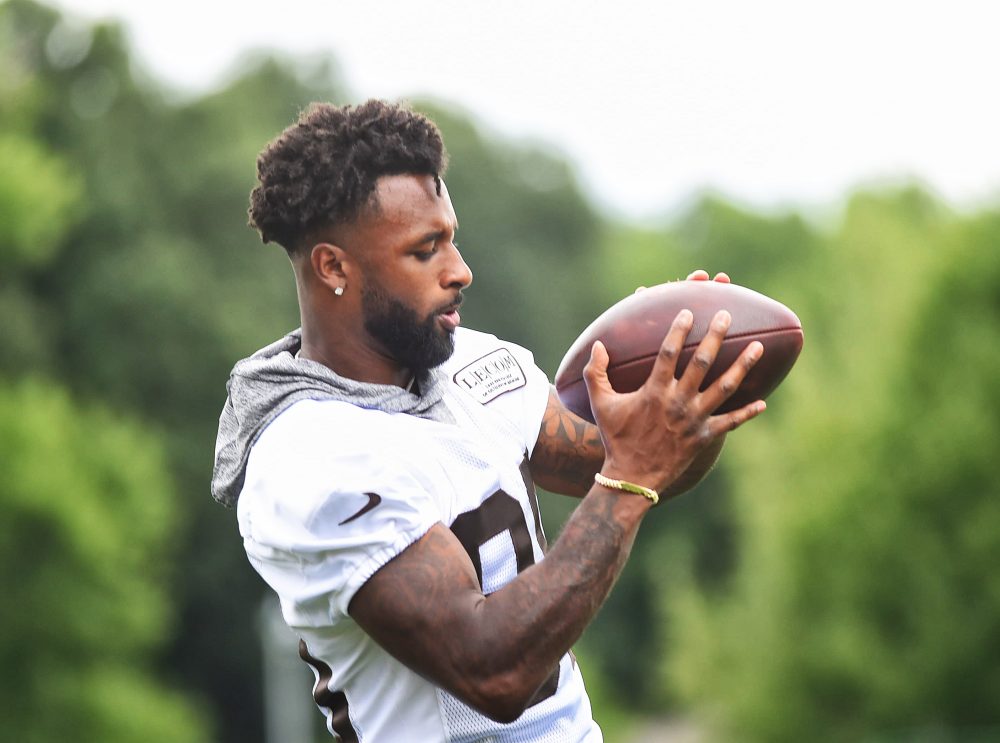 BEREA — Receiver Jarvis Landry caught a 4-yard touchdown from Tyrod Taylor on Saturday in a no-tackling scrimmage, following the 26- and 36-yard scores he had Friday.

That was it for Landry for the scrimmage. Coaches’ orders.

“We gave him a semi-day off today,” coach Hue Jackson said. “He does not want it. It is a chore trying to get Landry off of the field. You almost have to take his helmet and threaten to kick him out of here because he wants to be out here all of the time.”

Landry’s work ethic has been on display since he joined the Browns in the offseason. He’s on a different level than his peers.

“He did not take it. We took it for him,” Jackson said of the partial day off. “Normally, those guys would come out here and not dress to practice. I know that we can’t do it that way (with Landry). Let him dress, let him go a little bit and then (wide receivers coach) Adam (Henry) take him out. That is the way that we have to work with him because he is not going to go out. He wants to compete the whole time.”

Jackson appreciates Landry’s attitude but is determined to avoid soft-tissue injuries that can strike at this stage of training camp.

“We have to be smart,” he said. “These are the days when those start to happen. Two big days in a row like that, that is when guys start getting something with his legs. It was smart on his part that he did not fight to get back in because I think he knows that when you are out, you are out. At the same time, I do love his want-to.”

** Duke Johnson had a 39-yard run, pulling away from safety Elijah Campbell.

Jackson likes what rookie Austin Corbett, the No. 33 pick, has done since being inserted as the first-team left guard Wednesday when Joel Bitonio was moved to left tackle.

“It is a start to something good, I believe,” Jackson said.

Corbett and Bitonio attended the University of Nevada.

“I see a young player who is playing with somebody that he is comfortable with,” Jackson said. “They communicate well. They had some double-team blocks that were tremendous.”

“He’s solid. He has a lot of potential,” Ogunjobi said. “When they kicked him back into guard you got to see more of his power, his quick jumpsets, all those kinds of things and you can tell that this is a position he can play really well, too.”

Higgins, a fifth-round pick in 2016, was out of the Browns’ plans until he was back in them. He was cut last season, only to be re-signed and catch 27 passes for 312 yards and two touchdowns in 15 games, including four starts.

He believes this could be his breakout season.

“I feel like this is my chance,” he said. “And I just want to make the most of it, referring back to me being cut and not wanting to be there in those shoes last year, so I’m just working day in and day out to not be in that predicament.”

He’s had a strong camp but is fighting for a roster spot. He was asked how far he can climb the depth chart.

“That’s up to the coaches,” he said. “I’m going to keep making plays when the ball comes to me, and when my opportunity comes I’ve got to make the most of it.”

Receiver Corey Coleman didn’t do much Saturday and sat out the post-scrimmage receiver drills.

“It is probably a little hamstring or something that is a little sore,” Jackson said. “We will find out more when we go in.”

Coleman has been bothered by soft-tissue injuries since his days at Baylor.

Rashard Higgins says Josh Gordon “in good spirits,” will be “ready to go” when he returns
Notes: Jamie Collins says he’s ‘shooting for greatness’ in return from knee injury