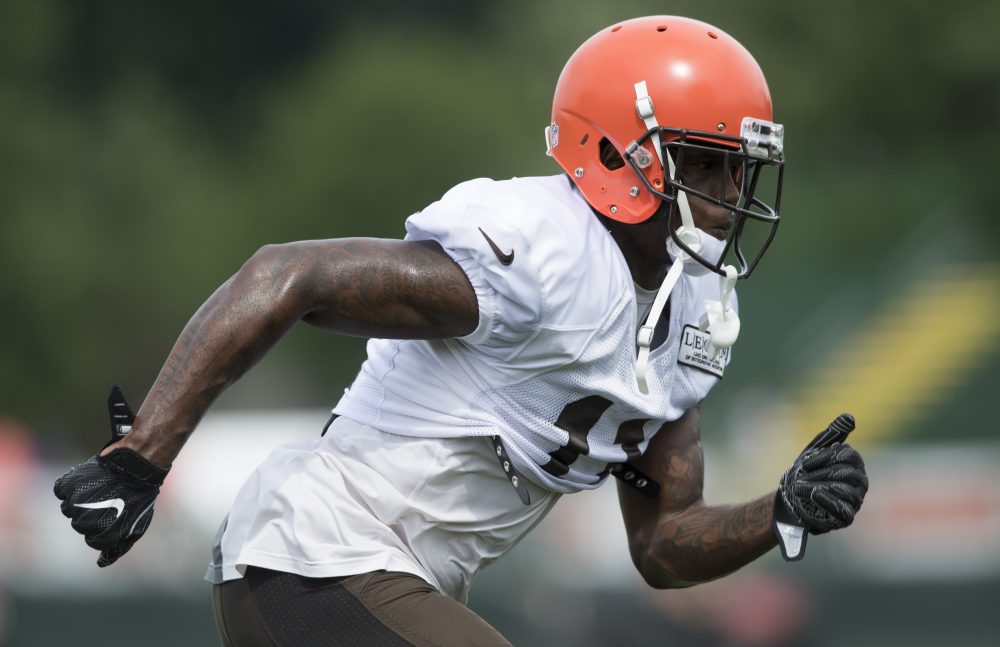 BEREA — Jarvis Landry is alone at the top.

With Josh Gordon still absent from training camp and Corey Coleman unceremoniously sent to the Buffalo Bills, Landry is the only proven receiver on the Browns roster. Running back Duke Johnson, who enjoys dabbling at receiver, is a distant second in NFL production.

Rookie Antonio Callaway, a fourth-round pick out of Florida, is at the top of the list. He took over for Coleman at the X-receiver spot Saturday in the no-tackling scrimmage and expects to move into the starting lineup.

“Corey was a great teammate, but at the end of the day, it’s a business,” said Callaway, who worked with the first team again Monday.

The trade was primarily about the organization’s disappointment and frustration with Coleman, the No. 15 pick in 2016. General manager John Dorsey desperately wanted to dump him and received only a 2020 seventh-round pick in return.

“With John Dorsey and myself, we will always try to find ways to continue to get better however we think,” coach Hue Jackson said. “Sometimes that’s adding players. Sometimes that’s moving players. There’s a plan in place, and we’re executing that.”

Dorsey and Jackson are well aware someone has to line up opposite Landry, and Callaway took the trade as a sign of belief in him.

“It gave me confidence to push harder, do the extra,” he said. “I’m pumped.”

Landry said he didn’t see the Coleman trade coming, because players never do and he had his head down working. But after digesting the news of Coleman heading to Buffalo, Landry predicted minimal impact on the future of the Browns, who are devoted to a turnaround after going 0-16 last season.

“Having Corey in the room it helps us out, but at the same time, now that he’s not here, we have to move past it,” Landry said. “We can’t dwell on losing a guy … so I don’t see it having any effect on the team.”

The Browns had veteran assistant coach Al Saunders work with Coleman for two years, then well-respected receivers coach Adam Henry was hired this year. Yet Coleman failed to develop into the player they hoped.

“I don’t think any of that matters right now,” Jackson said when asked about the frustration. “I think what matters is we’re going to coach the guys that are here and wish Corey the best of luck.”

Jackson said the Coleman trade was independent of Gordon’s situation.

“That has nothing to do with Josh. None whatsoever,” said Jackson, who wouldn’t say if he’s been in touch with Gordon.

Landry, acquired in a trade from the Dolphins in March and given a five-year, $75.5 million contract, has assumed the role of tone-setter and inspirational leader. Callaway was suspended for his final season at Florida, but Landry said the Browns don’t have the luxury of bringing him along slowly.

“It’s the NFL and regardless if you’re a rookie or a 10-year player or whatever, you’re expected to come here and perform and that’s what we want out of every single guy,” he said. “So hopefully he can come in and step up and we need him to.”

Callaway (5-foot-11, 200 pounds) has a similar skill set to Coleman. He lacks ideal height but has excellent speed and burst. Landry has been impressed.

“Absolutely, he continues to work hard and he’s been bouncing around a little bit, position to position, but at the same time he’s embraced it and he keeps working hard and that’s all you can ask,” Landry said.

Dorsey continues to say he expects Gordon to return, but there’s no timetable. Until Gordon is back and shows he’s ready to go, the receiving corps looks increasingly thin on talent and depth.

Rashard Higgins (33 catches in two years) could compete with Callaway for the second starting spot. The rest of the depth chart is a jumble of inexperience, with sixth-round rookie Damion Ratley, veteran Jeff Janis (17 catches in four years with Green Bay), undrafted rookies Da’Mari Scott and Derrick Willies and first-year player C.J. Board.

Johnson’s versatility, reps as a slot receiver and willingness to line up there provide a fallback option. He has 188 catches for 1,741 yards and five touchdowns in three seasons.

“Wherever the team needs him to be, I think he’ll be and he’ll embrace it, whether it’s a receiver or a running back or whether it’s doing a little of both,” Landry said. “But his ability to make plays is something that nobody is going to question.”

Callaway must prove he’s ready, in a hurry. In two years at Florida before the suspension, he caught 89 passes in 26 games, including 24 starts, for 1,399 yards and seven touchdowns. His 678 receiving yards in 2015 set the Florida record for a true freshman.

“He has talent. I think we all know that,” Jackson said. “But I think he’s starting to really get the system, learning how to do things the way we want it done.”

Callaway missed time in the offseason program with toe and groin injuries but said the big adjustment has been learning the playbook.

“Because of the different packages and things being installed,” he said.

Callaway’s playmaking ability showed up periodically in the first 10 days of camp, including a 56-yard catch of a go route Saturday. But his inexperience has been just as obvious, with coordinator Todd Haley loudly pointing out his mistakes.

“I don’t want anything but the best out of myself,” Callaway said. “It just lets me know he cares. All the coaches care.”

Callaway said he’s tough so he’s not worried about playing in his first game in nearly two years Thursday night in the preseason opener at the Giants. He’s looking forward to the opportunity.

Driven to succeed and learning from the best, DT Larry Ogunjobi says he’s ready to step into starting role
Baker Mayfield banking on experience against Browns starting defense paying off against Giants backups