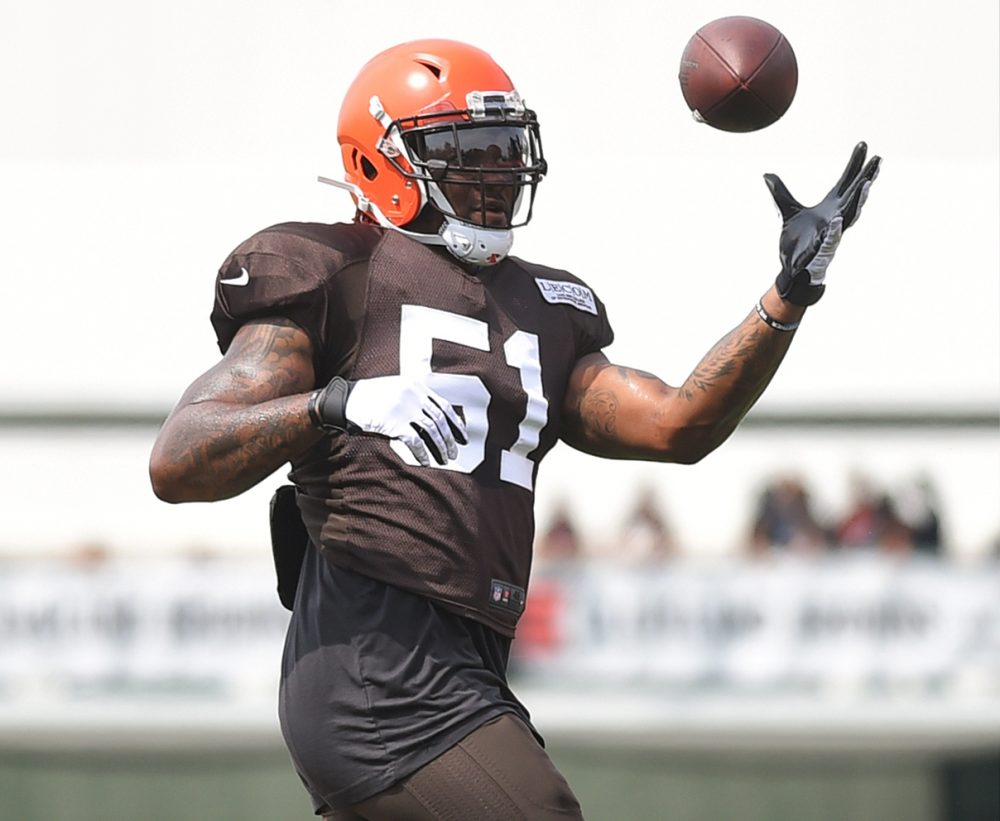 “I’m shooting for greatness,” he said Monday. “Always shoot for greatness, but last year set me back. That was my first injury, so I’ve never been down like that, so I don’t have a choice now, come back and try to be great.”

Collins tore his medial collateral ligament after making an interception against the Lions and missed the final seven games following surgery. He said the worst part was just being injured.

Collins said being sidelined was difficult mentally and physically. Coach Hue Jackson said he could see the inactivity wearing on Collins.

“When you are a premier player like Jamie is and you have never been injured and then you are and you are not out there, it is a long rehab and you have to work through all of that, I think it is different,” Jackson said. “He has worked through that. He is back out there competing and playing. He needs to go play in a game against a different opponent and go make plays.”

Collins showed he’s healthy with an interception and end zone breakup Friday in the scrimmage.

“I was just glad to be back out there, once again, full-go, tackling live, getting my hand on the ball,” he said. “Just getting back in the groove, you know what I’m saying.”

Jackson said the big plays were a result of Collins’ football instincts.

“I would like to say my whole childhood growing up, my life, not just football but just life in general,” Collins said of where he got the sixth sense. “You can take stuff from your life experience to the field. It’s all just instincts, common sense, however you want to put it.”

Collins joined the team in 2016 in a trade from New England. He’s the senior member of the linebacker group and said he’d like to think of himself as a leader.

“But that’s not for me to determine. I let other guys determine that,” he said. “I don’t call myself anything. I’m not that type of guy, I just do what I’ve got to do, and if guys follow, then they follow.”

Collins, who doesn’t enjoy his time with the media, was asked how good the defense can be.

“I think we can be pretty damn good,” he said. “Just got to put it together.”

Running back Duke Johnson likes to talk about playing receiver.

Jackson says it should stop at conversation.

“Let me make this clear: Duke’s position won’t change. That’s first and foremost,” Jackson said. “But will Duke get the opportunity as a back in our packages and play receiver? Yes, he will.

“Duke is a very, very vital part of what we do on offense, and he’s got to continue to learn the system, get better and he will. He’s been a playmaker ever since I’ve been here and he’ll continue to do that.”

Johnson played slot receiver in the opener last year, then went back to running back. He continues to practice some with the wideouts but hasn’t attended their meetings in camp.

“I think I enjoy wideout and have more fun playing wideout than I do running back,” he said.

After months of anticipation for many Browns fans, HBO’s “Hard Knocks” will debut Tuesday night at 10.

The show’s decision-makers figure to have a tough time deciding which storylines to put in the spotlight. Baker Mayfield’s first camp, the trade of Corey Coleman, Jackson’s jump into Lake Erie, the personality and strong start of Jarvis Landry and the absence of Josh Gordon could all compete for air time.

“I think it’s going to be an opportunity to show the world how hard we’ve worked and the mentality going forward and the culture we’re trying to create here,” Landry said.