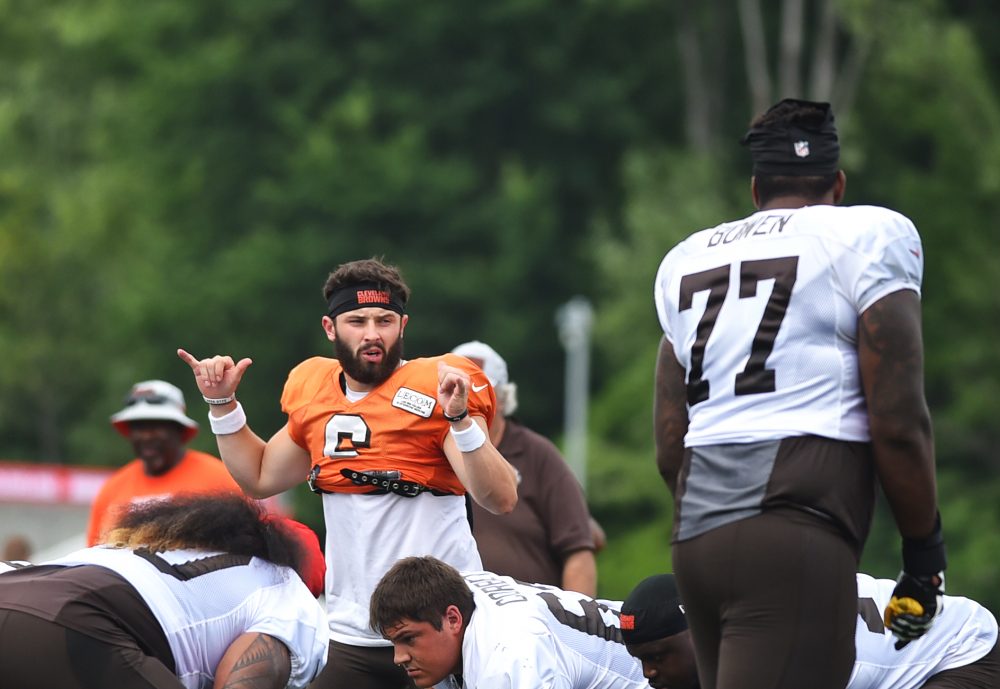 No. 1 pick Baker Mayfield spent the past week of training camp looking across the line of scrimmage at Myles Garrett, Jamie Collins, Christian Kirksey, Joe Schobert and Denzel Ward.

As Mayfield continues to lead the second-team offense — and be stuck behind starting quarterback Tyrod Taylor — he’s seen more repetitions against the first-team defense, starting with the scrimmage Friday. The step up in competition provided quality preparation for his preseason debut Thursday night against the New York Giants in New Jersey.

“Another chance to compete,” Mayfield said Tuesday. “I think it’s going to be a good test for us to see how we translate what we’ve been working on and take it out against somebody else and see if we can execute it.”

Mayfield will replace Taylor early and is scheduled to play at least two quarters. He’ll face the second- and third-teamers of the Giants, giving him the chance to continue his strong performance from camp and light it up in his first NFL action.

“I’m excited. You can tell the guys are pretty excited to get out there Thursday and compete against somebody else besides yourself,” he said.

Mayfield went the first seven practices of camp without an interception. Linebackers Collins and Schobert and safety Jabrill Peppers have picked him since.

Mayfield might be sick of looking at Cleveland’s starting defense but sees the benefit.

“Absolutely. Anytime you get a better competition level, it’s always better for you because you want to get the best out of yourself and you want to compete against the best,” he said. “It makes it more realistic for when I do get my chance to play. So the reps against them, need to make sure I take advantage of it.”

Competing against the starting defense with the backup offense isn’t easy. The protection doesn’t hold up as long and the receivers don’t get open as much.

Mayfield refused to call that adversity.

“I still have to do my job and the most important thing for me is raising their expectations and their level of play, as well,” he said of his fellow second-teamers.

Mayfield said his command of the offense has improved and wants to show it against the Giants by getting rid of the ball in a hurry and not turning it over. The coaches have been in his ear about not holding the ball too long, especially in the scoring zone.

“This game’s a little bit different than Big12 football — when you have points you gotta make sure to take advantage of that and secure those points,” said the Heisman Trophy winner at Oklahoma. “So down in the red zone, no sacks, no turnovers, no dumb penalties, which all goes in hand with making sure you have control of your offense.”

“A couple good chewings,” he said of the coaches’ criticism.

There will be plenty to watch Thursday night besides Mayfield.

The Browns have upgraded at quarterback, but those guys can’t succeed without receivers. Outside of No. 1 wideout Jarvis Landry, that’s a scary proposition.

Corey Coleman was traded to the Bills on Sunday. Rookie Antonio Callaway was cited for marijuana possession after a traffic stop and didn’t tell the team. He traveled to New Jersey but could be benched.

So the starter opposite Landry will likely be Rashard Higgins, who was cut for a bit last season and opened this camp on the roster bubble. After him, it’s a whole lot of inexperience.

With multiple roster spots seemingly there for the taking, the unknowns will look to impress. Da’Mari Scott, Damion Ratley, C.J. Board and Derrick Willies have flashed in camp but must carry it into the games.

The extensive roster turnover orchestrated in the offseason gave coach Hue Jackson hope and he wants to see all the new pieces in a game setting.

The starters won’t play much on either side of the ball — probably a series or two — but Jackson has expectations.

“I need them to be out there together and experience some things and hopefully have some success,” he said. “Move the ball, find some chemistry amongst the group, let them play.”

A scoring drive from the offense and a three-and-out by the defense would qualify as a good night’s work.

For the first time in his NFL career Joel Bitonio will play left tackle against another team. His ability to transition from left guard could be vital to the Browns’ chances this season, but Jackson said he won’t play Bitonio any longer than the rest of the starting line.

“If you watch who he practices against every day, he is getting a lot of reps a lot of different ways,” Jackson said, referring to Garrett. “This guy is a starter, has played in this league and knows what to do.”

Perhaps more important against the Giants is how Greg Robinson performs. He’s the lone internal candidate with the chance to take over the left tackle job and allow Bitonio to move back inside, where he’s comfortable.

Robinson was the No. 2 pick in 2014. That means he has talent. The fact he’s on his third team means he’s been a disappointment.

If he proves he wants it, he’ll be given a chance to win the starting job.

Ward, the No. 4 pick, is already locked in as the No. 1 cornerback. The rest of the rotation is fluid.

The preseason magnifies everything, and so it will be for the cornerbacks. Any interception, pass breakup, big pass interference penalty or touchdown allowed could change the order of the depth chart heading into the season.

The Browns have bodies at the position but they need to figure out where they fit at one of the game’s most important spots.