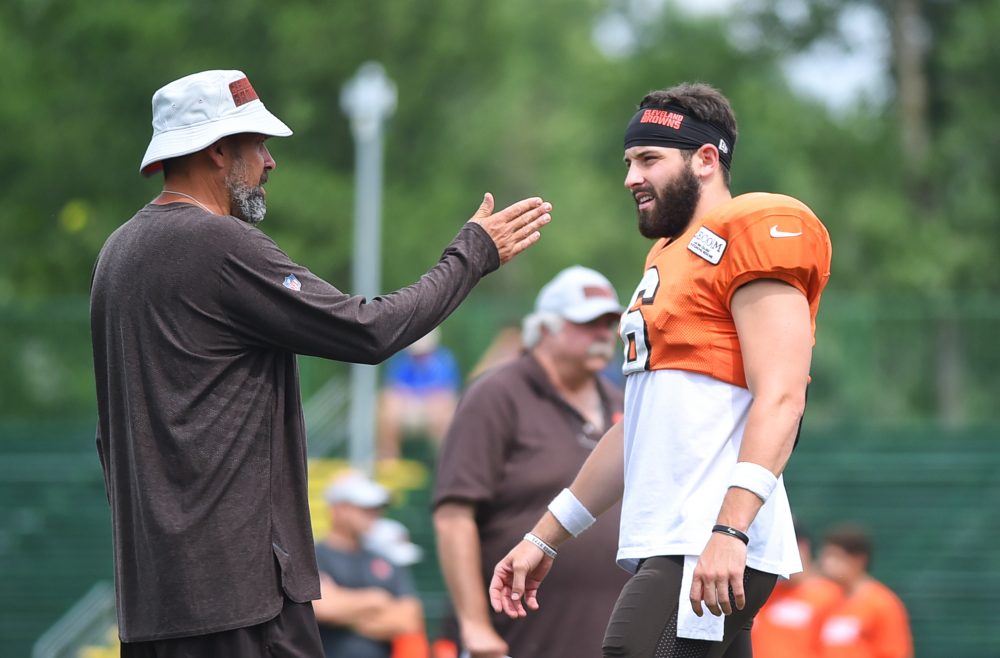 Hue Jackson carries the scars of the worst two-year coaching record in NFL history, and the trauma of 1-31 wasn’t washed away with his jump into Lake Erie.

He’s dead set on starting veteran quarterback Tyrod Taylor rather than No. 1 pick Baker Mayfield, in part because of the misery he experienced when forced to start rookies Cody Kessler and DeShone Kizer the last two seasons.

Another byproduct of 1-31 showed up loud and clear in the first episode of HBO’s “Hard Knocks” on Tuesday night. When all the f-bombs, funny scenes and cool videography were removed, the show revealed a conflict between Jackson and new members of the team when it comes to resting players.

The Browns are trying to change the culture after 1-15 and 0-16 seasons. Jackson is trying to get his best players to the regular season healthy, and the athletic training staff devised a plan to give periodic days off to key players with injury histories.


That’s created friction, most apparent inside a coaches meeting.

“We need to get so much done. If we live in our fears …” said offensive coordinator Todd Haley, in his first year with the team. “Our team has to get mentally tougher and be able to fight through the s— that we’ve got to fight through.

“We’ve got to change this drastically, and if we’ve got guys that haven’t done s— sitting around doing nothing, I just don’t know how we’re going to do it.”

Haley’s comments followed a plea from running backs coach/associate head coach Freddie Kitchens, also in his first year with the team, to have the players being held out to at least dress for practice.

Jackson listened, then told the room how things were going to be done and why.

“For the new coaches here, we’re not taking guys out because they’re special or anything like that,” he said. “We’re taking them out for preventative measures. And normally the team has understood that.”

Jackson got defensive when defending his plan.

“I used to sit in the same chairs you guys sit in, I used to feel the same way,” he said. “I used to want to kill them. Until all of a sudden I sat in this chair and then they’re not there and you don’t get them to practice and you can’t get them through and then you don’t have them for three weeks.

“And I’m not living in my fears, that’s real. I get to watch from a different lens. And I think you guys can all respect that. At the end of the day, I get to drive this bus and I’m going to get it the way I want it.”

Haley, defensive coordinator Gregg Williams and senior offensive assistant Al Saunders have been head coaches in the NFL. Saunders is a mentor to Jackson and gave him a motto that Jackson quoted.

“It’s your team, you can do what the hell you want,” Jackson said.

Receiver Jarvis Landry, who was acquired in a trade in March, made it clear he doesn’t believe in the days off. His speech in the receivers meeting room drew rave reviews and made him a star of the premiere.

“I don’t know what the f—’s been going on here. And I don’t know why it’s been going on here, but if you’re not hurt, like if your hamstring ain’t falling off the f—– bone, your leg ain’t broke, you should be f—— practicing,” he said while standing in the middle of the room. “That s— is weakness, and that s— is contagious as f—. And that s— ain’t going to be in this room, that s—’s been here in the past and that’s why the past has been like it is. That s—’s over with here.