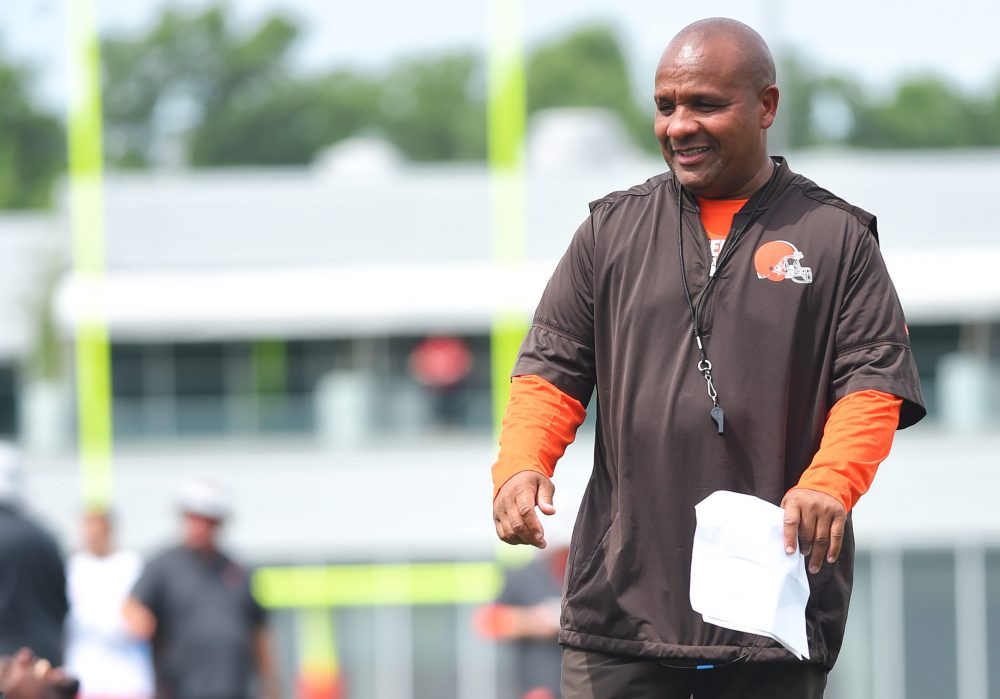 It’s a “Hard Knocks” life for the Browns these days, and nobody is going to feel the knocks harder than Hue Jackson, who is about as close to being a lame duck coach as there can be.

The popular HBO series is only going to exacerbate and call even more attention to the awkward, nebulous nook currently occupied by the Browns’ victory-starved head coach and his historically dreadful coaching resume.

It comes with the turf. The wholly unique and unfortunate turf trod by Jackson, who is the most visible embodiment and reminder of the very nightmare of the last two seasons that the franchise is so desperately trying to put behind it.

Yet, there he is.


This wouldn’t be such a big deal if Jackson was the guy who ran onto the field to retrieve the kicking tee following every kickoff. It wouldn’t matter if Jackson was one of those lugging the water bottles into the huddle during timeouts.

But Jackson isn’t one of those guys. He’s this guy: the head coach of the 0-16, 1-31 Cleveland Browns. Because he is, Jackson, unavoidably, for better, and especially for worse, is going to be one of the stars of “Hard Knocks.”

His players and assistants and Browns fans are all trying to forget what he’s done while respecting what he’s doing.

This obviously makes it hard on everyone, but it’s ratings gold for HBO.

Uncharted, unwanted territory — that’s what it is. A coach who survived the worst two-year run in the history of the sport, a coach everybody thought would be fired, but wasn’t. A coach who literally jumped in the lake as self-penance for his poor, poor, pitiful team is, against all odds — and we mean ALL odds — back for more.

And they’re making a TV show about it.

Great for us. Bad for him.

So that he might have some peace and quiet while he tries to resurrect his team and his career, Jackson probably would have preferred holding training camp in Moose Jaw, Saskatchewan.

Instead, they’ve turned the Factory of Sadness into a sound stage. (“Lights! Cameras! Sadness!”)

Caught in the middle is the beleaguered head coach who’s being cornered by his own comeuppance. Jackson has become part subplot, part curio-with-a-whistle.

It didn’t take long for the magnificent awkwardness to start stealing scenes. Episode one of “Hard Knocks” did a great job showing the chaotic juxtaposition of old Jackson vs. new landscape.

While Jackson was defending to his borderline bewildered new assistant coaches the theory behind his policy of giving selected players days off from practice, Jarvis Landry — one of the few Browns receivers not scheduled for a hearing in Strongsville Mayor’s Court, missing from training camp altogether or traded — stole the show during the “Hard Knocks” season premiere.

What follows, as artfully constructed by my colleague, Browns beat writer Scott Petrak, are the soaring, lyrical words from the Jarvis Landry Address:

“I don’t know what the f—’s been going on here. And I don’t know why it’s been going on here, but if you’re not hurt, like if your hamstring ain’t falling off the f—— bone, your leg ain’t broke, you should be f—— practicing. That s— is weakness, and that s— is contagious as f—. And that s— ain’t going to be in this room, that s—’s been here in the past and that’s why the past has been like it is. That s—’s over with here.

But I think he meant that in a nice way.

As Scott pointed out, The Jarvis Landry Address drew rave reviews and made him a star of the “Hard Knocks” premiere.

It also helped establish the notion that while there may not be a new sheriff in town there ARE a bunch of new deputies — or at least one, who certainly has a way with wayward words.

So while the 1-31 coach is saying one thing, the assistant coaches are questioning it and Orator Landry is blowing the whole notion out of the water with one of the more explosive sporting harangues ever by a slot receiver.

This is not a good look for Jackson, who unfortunately has had a tough go of it lately with two deaths in his family.

But if he can survive 1-31, he can probably survive this.

What can’t he survive?