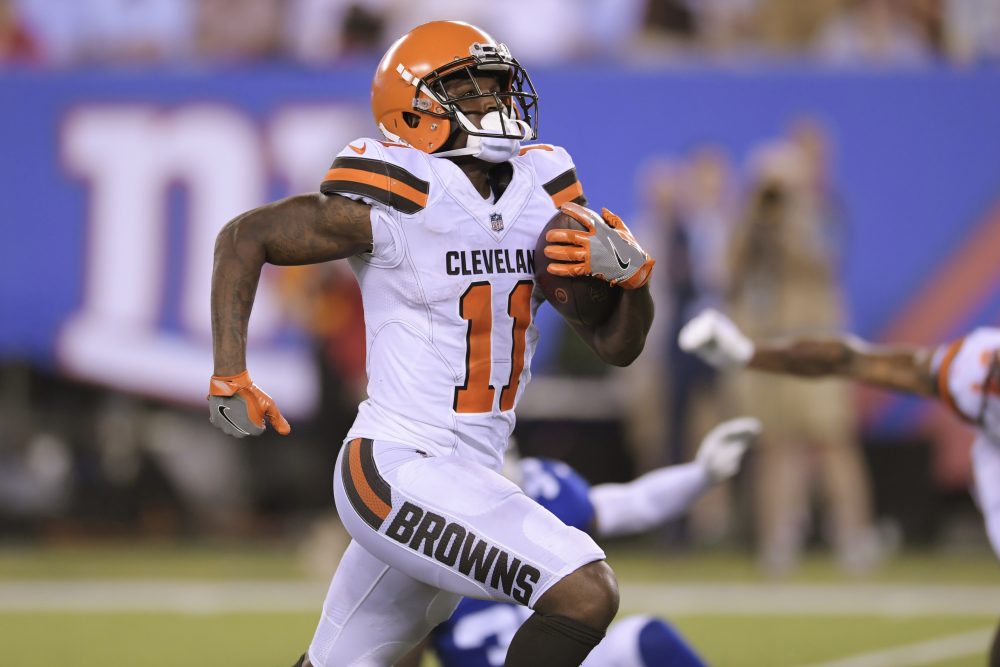 BEREA — Rookie receiver Antonio Callaway played 54 snaps Thursday night against the Giants. There was a simple explanation for why he was on the field for a team-high 78 percent of the offense’s snaps.

“I was trying to make him play the whole game if we could,” coach Hue Jackson said Sunday after practice. “I didn’t want him to come out.”

Callaway started and played into the fourth quarter. Playing that much in the preseason opener is almost unheard of, but there were special circumstances. He was cited for marijuana possession after a traffic stop last week in Strongsville and didn’t tell the team.

“That was part of the consequence of what he’d been through, and he knows it,” Jackson said. “Either you sit him or make him play. I thought it was better to make him play, make him play as long as he could. There were a couple times he kept waving to come out. We said, ‘No, stay in there.’”

Callaway, a fourth-round pick, went without a catch on three targets in the first half of the 20-10 win. He rebounded in the second half with three catches on four targets for 87 yards, including a 54-yard touchdown on a slant.

Jackson said he liked the perseverance of Callaway, who hadn’t played in a game in more than a year after he was suspended for the 2017 season at Florida for his involvement in a credit card scam.

“He worked through it ’cause there were times he had his hands on his head like this and he was ready to go to the sideline. We go, ‘Nuh-uh. You’re back in there,’” Jackson said. “So he fought through it and came out the other side of it and made some plays. So that was good.”

Callaway, who was promoted to the starting lineup following the trade of Corey Coleman, didn’t complete practice Sunday. Jackson said he’s dealing with a rib injury from the game but will be fine.

“He tried to fight through,” Jackson said. “I mean, I’m glad he’s out there trying and competing and going and catching, but again he’s got to learn sometimes you’ve got to play with those things a little bit. So we’ll get through it.”

In his absence, sixth-round rookie Damion Ratley received a lot of time with the first-team offense and made some plays.

The Browns like their lot of young receivers, including Callaway, Ratley, Rashard Higgins, Da’Mari Scott, C.J. Board and Derrick Willies. They also have interest in free agent veteran Dez Bryant, who’s expected to visit this week.

“I think we have a lot of good things going, but at the same time I do not think you can ever have too many good football players as long as they fit and as long as it is the right fit for the organization, for the locker room and for all involved,” Jackson said of Bryant.

A LOT TO LEARN

Corbett, who played left tackle at Nevada, is still making the transition to life on the interior. He played 53 snaps against the Giants and got mixed reviews.

“I thought he battled. I think he is tough,” Jackson said. “He has some things he can improve on, as well, but I was happy. I did not see a bunch of pressure on the quarterback from his side so that was good.

“When I watched the tape, there are some fundamental things that he has to continue to work at. As a young player playing in his first game, I give him a thumbs-up for that, but he has to improve over the next several weeks.”

“It is always great doing things like that in front of your family and friends — people that you care about,” he said.

The Browns expect big things out of Njoku, the No. 29 pick out of Miami last season. He had a rough day early in camp with four drops but put it behind him.

“No one really wants to have a bad day in practice or in a game, but those happen. It’s how you bounce back and how you act after that,” he said. “I just kept working, along with our whole team. Our focus is to get better, and I believe that I am getting better.”

Harrison practiced with the third-team offense, and Jackson said he wants and expects him to play Friday against the Bills.

Jackson said he expects Zeitler back by the regular season opener Sept. 9 against Pittsburgh.

The Browns are practicing alone again this summer after holding joint sessions with Tampa Bay in 2016. Jackson wanted to face another team but couldn’t find a fit.

“Sometimes I do not think that people want to practice against us. We have a mad scientist on defense,” he said, referring to coordinator Gregg Williams.

** Jackson flew to Los Angeles on Friday morning for his mother’s funeral and returned Saturday night. He spoke at the service.