Carl Nassib offends grandma with swearing, knows 10 percent interest is too high, got bigger in offseason to handle time at defensive tackle 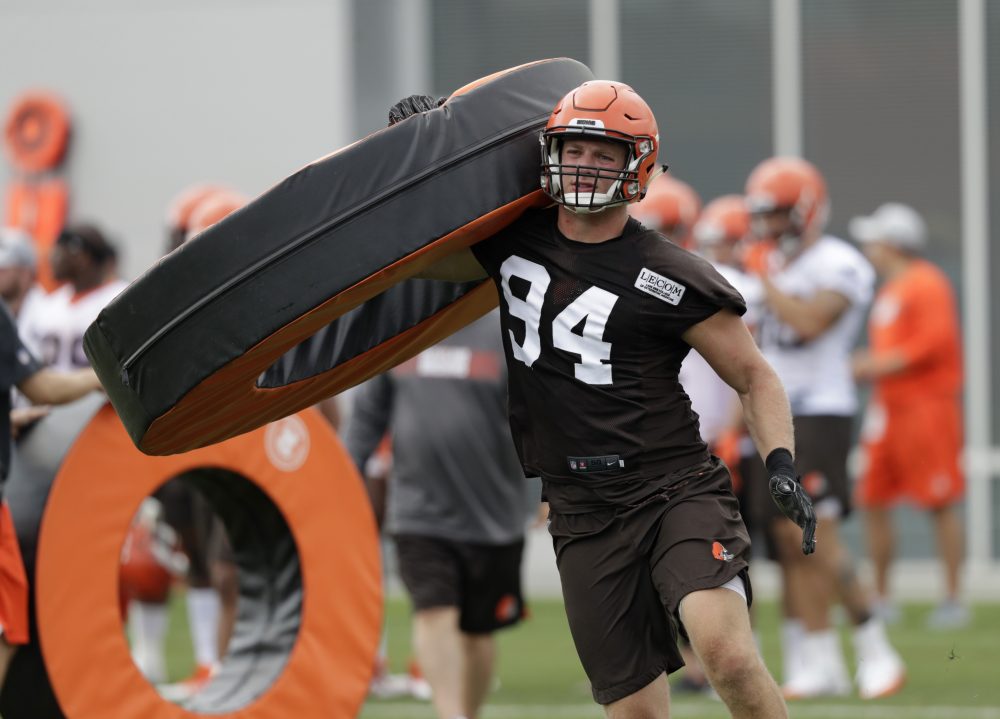 BEREA — Defensive end Carl Nassib is usually tight-lipped with reporters, so his show-stealing appearance in the premiere episode of “Hard Knocks” last week was a revelation.

He gave a passionate, profanity-filled lecture to the defensive linemen about compound interest and investing their money wisely. He talked about all the time wasted checking Instagram. He expressed his love for music star Taylor Swift.

“That is the real Carl Nassib,” coach Hue Jackson said Sunday. “There is no doubt about it. Do not let him fool you. That is who he is.”

The speech on investments, made as he wrote figures on the whiteboard, stood out among the many highlights.

“Yeah, I’m a little embarrassed about my swearing,” he said. “I didn’t know I sweared that much. My grandmother was upset with me, but I’m not on social media so I really don’t see anything, which is kind of nice.”

He also wanted to set the record straight, as many questioned his expertise after he kept referring to returns of 10 percent interest.

“I do not think that anybody is even giving 2 percent interest,” he said. “The way it was edited made it seem like I said that. I was talking about gains on stocks and other investments.”

Nassib, a biology major at Penn State, became interested in finance in the offseason.

“I don’t want to anybody to do something that I can do myself, so I wanted to learn how to do it myself,” he said. “I did a lot of research about finances and stuff like that because I did not study that in college.

“I felt like I wanted to share that with my teammates and the younger guys and help them out because it helped me out a lot.”

A veteran reporter asked if Nassib had any advice for his 401(k).

“Hopefully, you got a lot in there already,” Nassib said.

Jackson put Nassib on the spot during a team meeting, showing a picture of Nassib and Swift at her concert at FirstEnergy Stadium.

Jackson asked if things were working out between them.

He was asked Sunday if Swift has reached out.

Nassib admitted he’s a bit of a comedian off the field but he’s all business on it. This is an important training camp and preseason for him, with a lot of bodies competing for limited roster spots and playing time along the front four.

Nassib was a third-round pick in 2016 and started three of 14 games as a rookie, totaling 20 tackles, 2.5 sacks and four passes defensed. He started 12 games last year because of injuries to Myles Garrett and Emmanuel Ogbah and finished with pedestrian numbers — 31 tackles, three sacks and five passes defensed.

Garrett and Ogbah are back and healthy, leaving Nassib battling with rookie third-round pick Chad Thomas, free agent pickup Chris Smith and holdover Nate Orchard for roster spots and time off the bench at end.

Nassib (6-foot-7, 275 pounds) was used as a tackle often last season and likely will be again. He felt the need to get bigger to play inside and added weight in the offseason.

“Carl is bigger and it is showing up in his game,” defensive line coach Clyde Simmons said. “Carl is taking coaching very well. We suggested a couple of things to him and he’s working on them. It’s starting to show.

“Everything is a steady climb for him and he’s getting better every day.”

Denzel Ward’s journey to NFL fueled by competitive spirit, drive to succeed
Tyrod Taylor not looking for revenge vs. Bills on Friday but uses the trade to Cleveland as motivation