Tyrod Taylor not looking for revenge vs. Bills on Friday but uses the trade to Cleveland as motivation 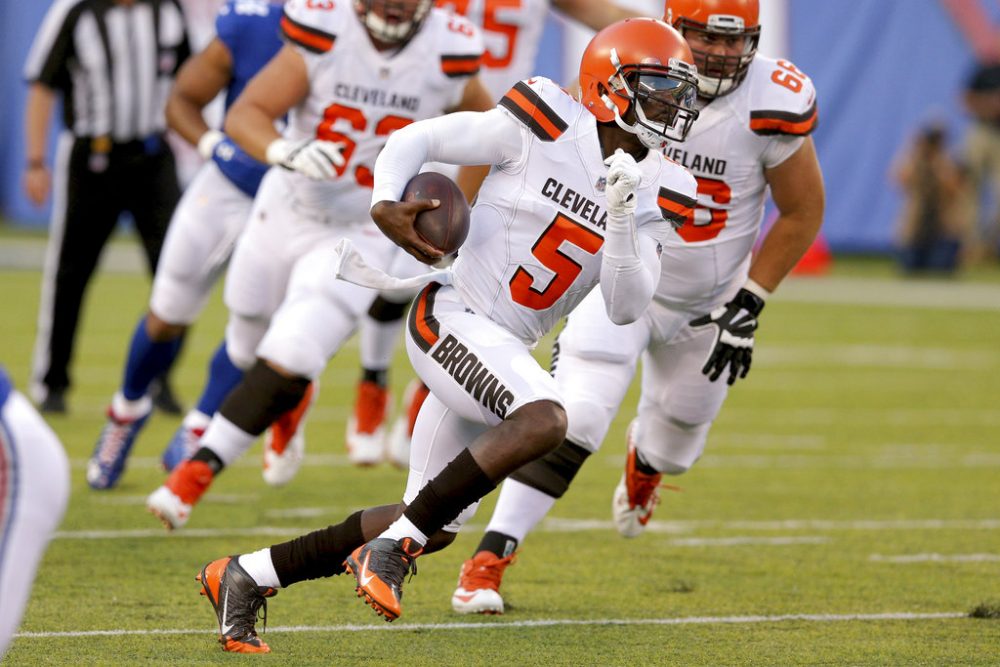 BEREA — Tyrod Taylor has the highest passer rating (92.5) in Buffalo Bills history. He was 22-21 as their starter and went to two Pro Bowls in three years. Last year he ended their 17-year postseason drought, the longest in American sports.

The Bills didn’t want him anymore.

“Definitely how I think it ended there, it’s motivation for this year,” Taylor said Tuesday. “Not necessarily for this game, but this year.”

The Bills were never satisfied with Taylor and traded him to the Browns in March for a third-round pick, No. 65 overall. The Browns host the Bills on Friday night in the second preseason game, but Taylor doesn’t want to make it about revenge.

“No, this game isn’t about them nor just me or our relationship,” he said. “It’s about us taking another step, getting better.”

As the starter and with the season quickly approaching, Taylor is trying to maintain laser focus. But in an interview in June he told NFL Network he would “definitely love” to knock Buffalo out of the playoffs after things didn’t end the way he would’ve liked.

“It definitely added motivation and I take it to work with me every day,” he said.

He tried to move past the breakup Tuesday.

“I wouldn’t say it was painful,” he said. “I have nothing to (hang) my head about in my time in Buffalo. I know those guys, played (with) those guys for the past three years, and I’d love to play against those guys.”

Despite the exit, Taylor, 29, has fond memories of his time in Buffalo. After four years in Baltimore without a start after being drafted in the sixth round, he signed with the Bills and was given the chance to compete for the starting job. He beat out former first-round pick EJ Manuel and veteran Matt Cassel and started 44 games in his tenure.

“I always just wanted an opportunity to prove myself and was finally given that opportunity,” Taylor said. “When you got a chance to showcase what you could do, step up to the plate and do it.”

“It was a learning curve for me,” he said. “Of course, when I walked into Buffalo a lot of people really didn’t know my name and I was able to win the starting job. So there was a lot that was accomplished in those years and I was thankful for those opportunities, but more so glad for the opportunity that I have here.”

Speaking of his name, Taylor cleared up how to pronounce it.

“I mean, TY-rod is definitely what I’ve heard most of my life,” he said. “But my mom calls me Tuh-ROD, but she also doesn’t call me by my first name.

“She calls me by my middle name, Di’allo. She’s the only one allowed to call me that, so ya’ll can’t start calling me that.”

Coach Hue Jackson was thrilled to take Taylor off the Bills’ hands. Jackson was desperate for a competent, healthy veteran after two seasons doomed by poor quarterback play and believes Taylor’s underappreciated around the league.

“I just think he is a pro NFL quarterback who likes to compete, likes to play, wants to win, wants to lead an offensive football team, a football team and our organization,” Jackson said. “He was the right fit for us at the right time.”

No. 1 pick Baker Mayfield said he hasn’t noticed any change in Taylor in advance of the meeting with the Bills. He didn’t expect one.

“He’s the same guy every day, and that’s what you want, so for him, it’s just another business day,” Mayfield said. “You know exactly what you’re going to get out of him, and that’s important for our guys to see that. They see the standard. They see the expectations, and he lives up to it every day.”

Taylor started his Browns career in style, going 5-for-5 for 99 yards, a touchdown and a perfect 158.3 rating in the preseason opener last week against the Giants. He showed a lot to his new teammates, including standing in the pocket and taking a hit after throwing a 32-yard fade to Jarvis Landry to open the game.

“You definitely have to do that to be successful in this league,” Taylor said. “Of course, as an athletic quarterback, some people say that you are quick to pull the ball down and run. But I think the more you’re standing in the pocket, of course, your offensive linemen appreciate it as well as the receivers.”

On the next possession, he flawlessly executed the no-huddle offense, calling the plays on the way to a touchdown.

“Yes, I enjoy it,” Taylor said. “It keeps the defense honest and it allows us as players, especially myself, to see things on the run and get us into the best situations.”

The Browns inherited the NFL’s longest playoff drought when Taylor led the Bills over the Dolphins and into the postseason. He could feel the weight lifted from the organization.

“Absolutely. To see the fans standing out in the snow as the plane approached back in Buffalo was definitely special to see,” he said. “So you definitely saw excitement and I look forward to creating that here.”