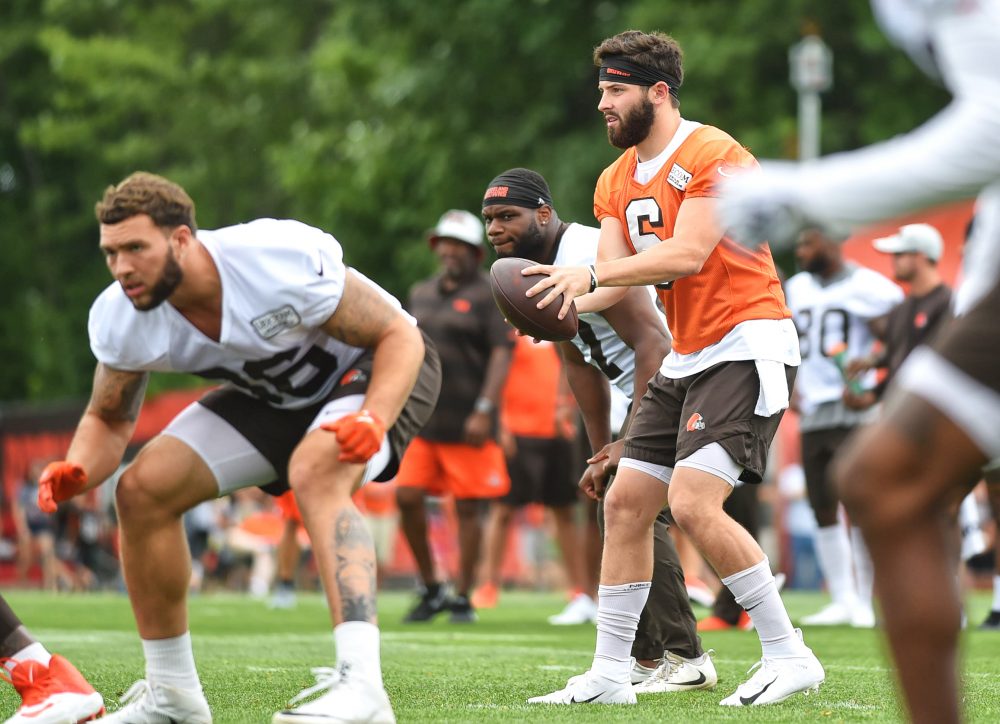 Coach Hue Jackson spoke softly as he walked the sideline during the preseason opener last week.

“How about that throw rolling to his right?” he said, captured on “Hard Knocks.”

The 24-yard dart to receiver Antonio Callaway was No. 1 pick Baker Mayfield’s best pass in the win over the Giants. Jackson came away most impressed by his presence in the pocket and is eager to see him again Friday night against the Bills.

“His poise back there, being able as a young guy to keep your eyes down the field, still have the play processed in front of you and still have the wherewithal to throw a strike to a guy, that is uncanny for a young guy,” Jackson said Wednesday.

Mayfield played seven series and went 11-for-20 passing for 212 yards, two touchdowns, a sack and a 125.4 rating. He ran three times for 13 yards and three first downs.

Among several quality throws, a pair stood out to him. He converted a third-and-18 with a 21-yard completion to receiver C.J. Board after stepping up in the pocket. He later slid left in the pocket and hit receiver Rashard Higgins for 13 yards on an in route despite having a pass rusher grabbing his leg.

“Those are NFL type throws that I’ve been working on and making sure that I could do and showcase that, so I was proud of that,” Mayfield said.

“It wasn’t too big for him,” he said. “He was by no means perfect, but he kept his cool. He was never flustered. I think it’s clear to everybody he can really throw the football.

“The key to him is to keep working, keep learning from the older guys (Tyrod Taylor, Drew Stanton) in the room. It’s an ideal environment to grow and learn and develop.”

Haley complimented Mayfield’s consistent approach to practice and consistent progression throughout camp. The performance against the Giants was the result.

“I thought for the most part he made good decisions and made some real good plays, so that was all good stuff,” Haley said.

Mayfield experienced Browns fans for the 15 camp practices and will get to see them in their natural habitat for the first time Friday at FirstEnergy Stadium. He’s sure to get a sweltering welcome.

“This is a football town when it comes down to it,” he said. “So it’s going to be exciting. I can’t exactly put a picture on it, what it’s going to be like playing out there at home for the first time, but I’d say it’s pretty exciting.”

He lives for big moments and took time against the Giants to appreciate the setting. He was shown on camera saying he was having fun.

“Yeah, I’m working hard, but it’s a dream job for me,” he said. “It’s something I’ve dreamt of for a long time, so when you go out there and you have a chance to do it, why not make the most of it, why not put everything you have into it.

“When you have some success, football’s hard, so you better enjoy it. It doesn’t come easy, it’s a lot of work, so you’ve got to be able to enjoy it with the guys.”

Mayfield wasn’t satisfied with his debut. He pointed to getting teammates in and out of the huddle quicker and starting the presnap motions sooner as areas for improvement.

“That’s the kind of stuff that you want to see the first game, make sure that you get it out of the way. You handle it so you don’t have to deal with it again,” he said.

His focus won’t change against the Bills.

“Same emphasis, getting the ball out quickly. No sacks. No turnovers,” he said. “Just putting our team in the best position to win.”

With Taylor locked in as the starter, Mayfield realizes the final three preseason games may be his last chance to play for a while.

“I’ve always had kind of a one-day-at-a-time mindset, but for me, yeah, I do have that sense of urgency to get better,” he said. “Every opportunity I can get, I need to seize that day, so for me it’s about taking it one day at a time, making sure I’m getting better every day.”