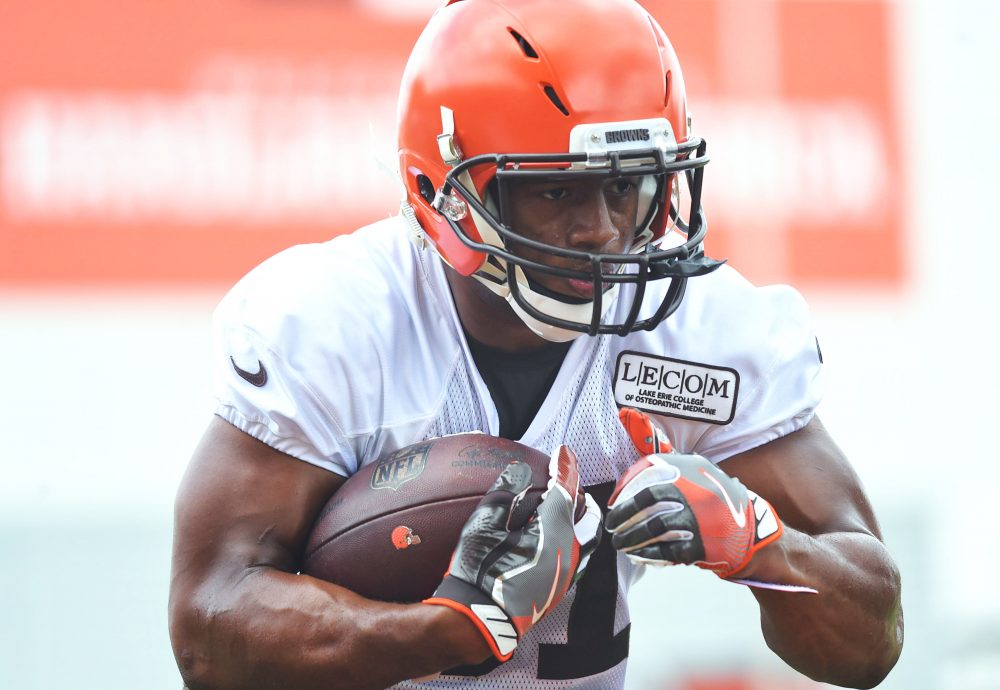 Here are five things to watch as the Browns return to FirstEnergy Stadium for the first time since last season:

Rookie running back Nick Chubb has something to prove.

The run game was the biggest negative in the preseason-opening win over the Giants and Chubb, the No. 35 pick, deserves a lot of the blame. He rushed 15 times for 11 yards with a long of 4.

“Nick missed a few runs that he wishes he could have back,” running backs coach Freddie Kitchens said this week. “Also, you are dealing with a guy who was pressing a little bit when he did not have early success.

The line didn’t create many openings, and Kitchens thought Chubb tried to do too much by bouncing runs outside that led to negative plays.

“Our backs need to do be better,” coordinator Todd Haley said. “We can’t have seven minus runs for 17 to 20 yards, whatever it is. You’re starting to give up points when you get into that area.”

Quarterback Tyrod Taylor downplayed the significance of facing his former team in the preseason, but human nature dictates there will be extra juice after the way the Bills treated him over the last year.

He was benched for a rookie at midseason despite having a winning record, then quickly returned to the lineup and ended the Bills’ playoff drought. Two months later the Bills traded him to Cleveland for a third-round draft pick.

Taylor looked in complete command against the Giants, going 5-for-5 for 99 yards, a touchdown and a perfect 158.3 passer rating.

“He’s following the pattern of successful players,” Haley said. “He’s generally the same guy every day and he’s just getting a little better every day and that’s all we’re looking for from everybody.”

The coaching staff appears to be all-in with the move of Joel Bitonio from left guard to left tackle.

“I feel comfortable with where we are right now from the first five standpoint,” Haley said.

“Joel will do a great job as a left tackle for us. There is no question in my mind,” coach Hue Jackson said. “Obviously, he has to feel confident that he can do it, and I think he is. He played against a tremendous rusher this past week and held his own. He will play more as we get closer to the season, and he will be ready to go.”

Bitonio was solid against New York’s Olivier Vernon and will face Buffalo’s Jerry Hughes. Bitonio wasn’t a fan of the change of position but is trying to settle in.

“I felt a little bit, not uncomfortable, just a fish out of water in the sense where it’s like, ‘I’m actually doing this in a game against a good pass rusher,’” he said of the opener. “I only played eight plays, so it was kind of hard to get in a great rhythm. But I felt like that last drive when we scored the touchdown I was starting to get a little comfortable.”

Taylor has had time to get over being traded.

Not receiver Corey Coleman. The Browns shipped Coleman to Buffalo on Aug. 5, getting only a seventh-round pick in the 2020 draft in return.

“Hey, it’s going to be weird. But I’m not out there anymore,” Coleman told Bills reporters. “I’m just treating it like any other game.”

He didn’t like a demotion to the second team and complained to Jackson, suggesting they trade him, so Coleman has extra incentive to play well in his Bills debut.

“We’re getting to the point now where it’s, ‘Hey, here’s the playbook, you got to know it,’” coach Sean McDermott said. “Biggest thing is we want him to come out and play fast and play physical.”

Despite Coleman’s flaws, he’ll be a good test for the Browns cornerbacks. If he sees time with the starters, rookie Denzel Ward and veteran Terrance Mitchell will draw the assignment. If Coleman’s with the second team, TJ Carrie and former Bills corner E.J. Gaines will get the chance to shut him down.

The most recent memory of rookie receiver Antonio Callaway is him running away from the Giants secondary on the way to a 54-yard touchdown on a slant from Mayfield.

The big play and solid second half didn’t erase his history of off-the-field issues and recent citation for marijuana possession and driving with a suspended license. But they provided excitement and a push to keep him out of trouble and on the field.

“Like, is he like too comfortable or he just doesn’t really quite get it yet?” Stanton said before the Giants game.

“He don’t get it yet,” Henry said. “Finally he opened up to me yesterday about what’s going on his life.”

“He’s got so much talent,” Stanton said. “Everything I’ve heard about him, he is a really good kid. He’s just got to realize, OK, how do you transition and become a pro.”

Callaway has sore ribs that were wrapped this week but he practiced and is expected to start for the second straight game. He had three catches for 87 yards against the Giants, all in the second half.

“I know what type of player he is,” Taylor said. “I was excited to see him go out and make those plays. We’ve seen him make them in practice but for him to go out in the game atmosphere and actually go out and compete and make those plays it’s definitely encouraging. So he set a standard, so we have to keep pushing him each and every week.”