Mailbag: How’s the O-line depth? Does Matthew Dayes have a shot? Crucial position group? How many WRs make roster? 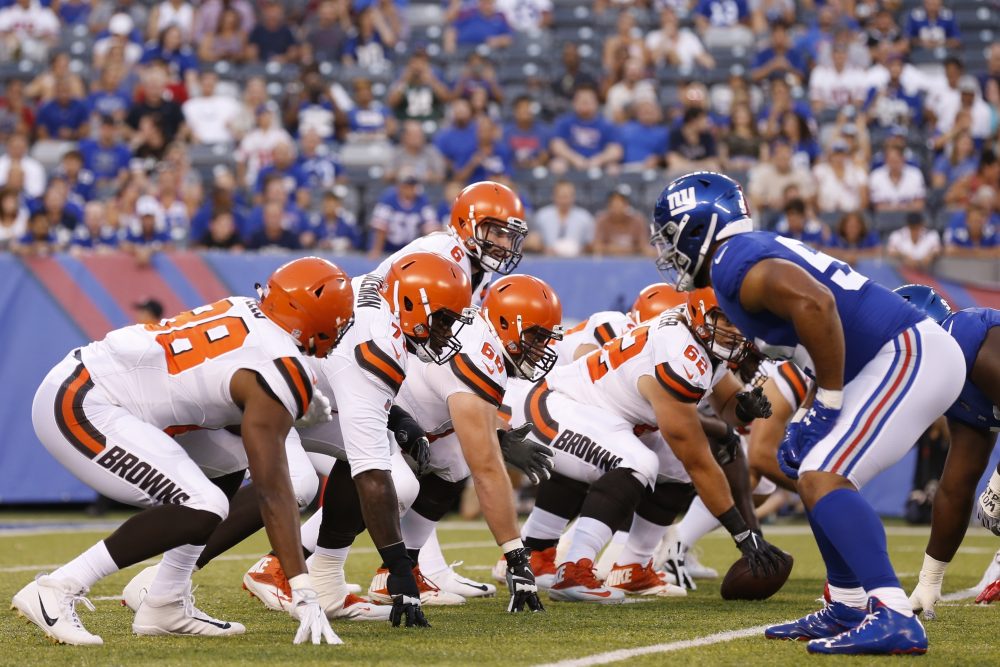 Q: I’d appreciate hearing from you concerning our depth on the O-line. I’m not liking what I see from the backups so far. Shon Coleman seems like a bust regardless of where they put him (shades of Cam Irving). Do you think Desmond Harrison has a shot at making the 53 in his place as a backup? I’d hate to see a guy with his potential go to the practice squad and get scarfed up by some OL-needy team (shades of Don Carey when Eric Mangini tried that back in ’09).

Finally, on the other line, I’m not liking what I’m seeing from DT Caleb Brantley. He seems injury-prone and got pushed back many times in New York by backup Giants’ O-linemen.

A: Your concerns about the offensive line depth are warranted and the backups were exposed, particularly in the run game, during the preseason opener. I named Shon Coleman my biggest disappointment of training camp and don’t think he will make the final roster. The toe injury that sidelined Harrison for the start of camp hurt his chances to make the team. I understand your concern about trying to get him through to the practice squad but he was undrafted, so I think the Browns will take the chance and be able to keep him.

The Browns need Greg Robinson to be good enough to make the final roster, either as the starting left tackle or the swing tackle. Spencer Drango has been running with the starters at right guard in the absence of Kevin Zeitler (calf), so his roster spot is probably secure as a versatile backup. I would expect another interior lineman to be added off the waiver wire.

The true question is what happens at left tackle. Hue Jackson remains committed to Joel Bitonio, but Bitonio would prefer to return to left guard. The ideal scenario would be for Robinson to live up to his status as the No. 2 pick of the 2014 draft, seize the left tackle job and allow Bitonio to slide back inside. Rookie Austin Corbett and Drango would make the team as backups, with Coleman, Harrison or a waiver claim filling out the roster.

Brantley hasn’t been able to stay healthy in camp, and could find himself on the roster bubble. It’s not a good sign he was playing late in the preseason opener.

Q: Because non-starters at so-called skill positions need to contribute some way to special teams, how likely do you think it is RB Matthew Dayes may survive over a sixth WR, given Duke Johnson’s pseudo-abilities at that position?

When conceptualizing a depth chart, Carlos Hyde and Dan Vitale are FBs, Nick Chubb and Dayes HBs and Duke the pass-catching specialist filling the dual capacity of third-string RB and WR.

A: I get your point but don’t see Dayes making the roster. While Johnson’s versatility does give the Browns flexibility, Hue Jackson and running backs coach Freddie Kitchens have been adamant they consider Johnson a running back. So that means Hyde, Chubb and Johnson as the RBs, with Vitale the FB. No room for Dayes.

And I think the Browns will keep as many WRs as possible due to the uncertainty/unreliability of Josh Gordon and Antonio Callaway.

Q: This week’s “Hard Knocks” showed Antonio Calloway giving his side of the story to coach Hue Jackson and general manager John Dorsey after he was cited by police. How much access does “Hard Knocks” have? Do players have any say in what gets aired? It was interesting that the show was able to show a conversation that could have legal ramifications, even for lesser charges.

A: The show has cameras just about everywhere in the team facility, while the players can say no to the NFL Films crew following them off campus. As for say in what gets aired, that’s an interesting topic. The team has some veto power, especially when it comes to competitive balance issues.

I don’t believe players have say over what gets aired, but legal ramifications could be – or maybe should be – an exception. I don’t think anything HBO aired regarding Callaway crossed the line. The only “revelation” was him saying the police officer found an old “roach clip.” The police report already stated marijuana was found, hence the citation.

My guess is players must sign waivers allowing legal and health information to be revealed.

Garrett was going up against left tackle Nate Solder. But Solder is 6-foot-8 and weighs 320 pounds. He is very mobile so I have no problem seeing that Garrett was contained by Solder. But on the other side Emmanuel Ogbah was going up against Ereck Flowers. Flowers was playing right tackle, which is a position new to him. Please analyze the Ogbah/Flowers matchup and describe how or why Ogbah was contained.

A: It’s way too soon to worry. Ogbah’s a solid player and a good complement to Garrett, and I expect a year with 6-8 sacks from Ogbah. Garrett better have twice that to live up to his potential.

Eli Manning threw only seven passes, so Ogbah’s rush opportunities were limited. I just rewatched, and Manning got rid of the ball in a hurry on almost all of them. Ogbah looked like he would’ve beat Flowers around the edge on one play if Manning hadn’t been so quick to release it. On two more occasions, it seemed as if Ogbah was a decoy and therefore just occupying Flowers at the line. I expect more pass rush from both ends against the Bills.

Which player’s unexpected “positive” performance holds the key to this group’s success? And why?

A: This is a doozy, but I’ll do my best. Cornerback (with left tackle a close second).

For coordinator Gregg Williams’ aggressive defense to reach its potential he needs his cornerbacks to play tight coverage to allow the pass rush to get home. That was impossible last year, as the corners were too slow to play anything but soft coverage in fear of allowing the big play.

Terrance Mitchell becomes the “unexpected” player key to the performance of the corners. He wasn’t supposed to start but has replaced TJ Carrie with the first-team defense and must hold down the side of the field opposite No. 4 pick Denzel Ward. Mitchell has looked good as camp has progressed and showed he won’t back down in a fight with receiver Jarvis Landry.

Q: After having so many weaknesses on the team for so long, what group would you say is still in need of some help? I just think the roster John Dorsey had put together in one year is pretty solid.

A: I agree Dorsey did a good job adding depth throughout the roster. But the area that most needs a boost is defensive tackle. (I could’ve gone receiver.)

Trevon Coley and Caleb Brantley are hurt, leaving Jamie Meder and Larry Ogunjobi as the starters with no proven depth off the bench. Veteran Johnathan Hankins worked out for the team Wednesday but wasn’t signed. Coley has a high ankle sprain but should be back around Week 1 to give the Browns three solid tackles. I would prefer even more depth and Brantley hasn’t shown me enough to count on him, in part due to a string of minor injuries.

Q: Is RB Matt Dayes going to get a realistic chance at making the team? I think he is a solid player when given a chance to play.

A: He’s getting a significant number of practice reps, so I would say yes. But as mentioned above, I just don’t see a spot for him in a crowded backfield.

Q: Who was greatest QB in Browns history??? After Jason Campbell, of course!!!!

A: Otto Graham, and it’s not close. Or because he went to Northwestern. (Go ‘Cats!!)

He took the Browns to 10 straight title games, winning four AAFC and three NFL championships. He was first-team all-league in nine of 10 seasons and is a Hall of Famer.

A: Mitchell is in line to start unless TJ Carrie, who lost the starting spot, or E.J. Gaines makes a late push. While Mitchell over Carrie and Gaines is a surprise given their histories and contracts, he’s been solid as camp has progressed. Gaines had been quiet until a three-breakup performance Wednesday.

Kendricks has exceeded my expectations. He’s all over the field and is a big-time blitzer. He may start the season as the fourth linebacker but I expect him to take significant playing time away from Schobert or Christian Kirksey.

Q: Why is Briean Boddy-Calhoun playing safety? Has he been there all camp?

A: Boddy-Calhoun played some at safety last year and then made the official shift in the offseason after John Dorsey added a handful of cornerbacks. Boddy-Calhoun is listed as the second-team free safety on the depth chart. He has also worked a bunch as the first-team nickelback. His versatility and intelligence make him valuable across the secondary.

Q: How many WRs do you think the Browns will have on the final roster???

A: Six. That seems like a lot but I think they’re willing to sacrifice a spot at tight end or running back for the insurance at wideout.

Jarvis Landry, Antonio Callaway and Rashard Higgins appear to be locks for the final 53. I’m assuming Josh Gordon will be back in time for Week 1 and I’m not counting on Dez Bryant being signed.

That’s four. But within the foursome are Gordon and Callaway, who could be a failed drug test from suspension. So I’d expect to see the Browns keep two of the following: Damion Ratley, Jeff Janis (good on special teams), Derek Willies, Da’Mari Scott and C.J. Board.

Mailbag: What seems believable about Josh Gordon situation? How do the cornerbacks look? What’s Nick Chubb’s role?
Mailbag: Will Joel Bitonio be affected by time at LT? Is Austin Corbett ready to be backup C? Is Desmond Harrison ready?