Josh Gordon works out, closely watches practice; teammates excited to have him back, looking forward to seeing his impact on field 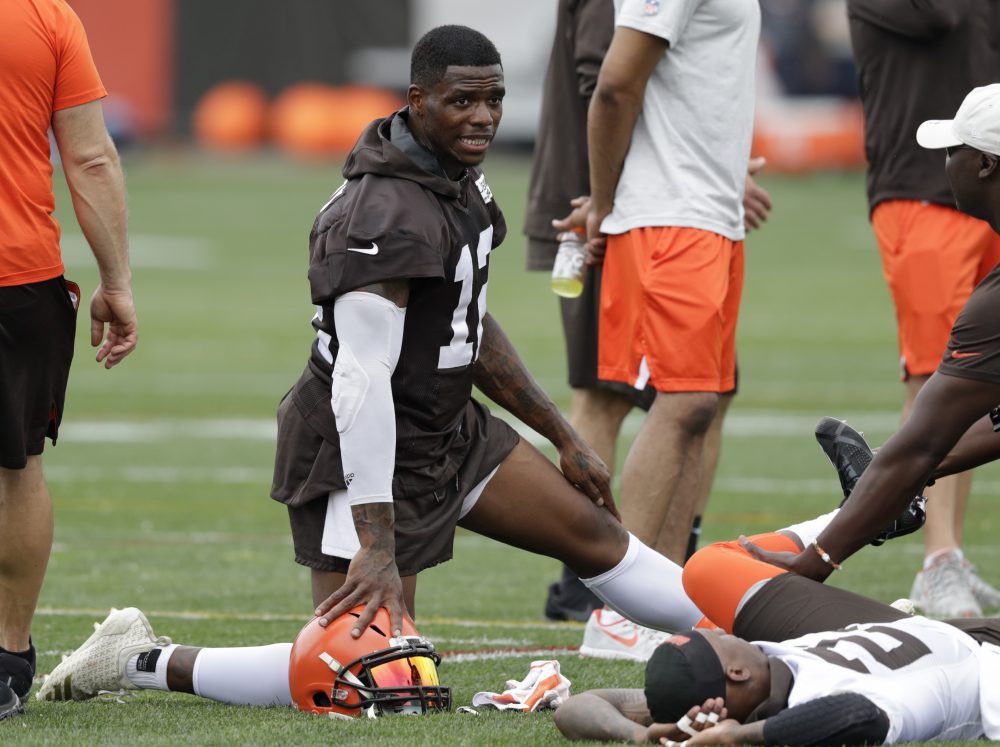 BEREA — Josh Gordon was immersed in football Sunday. He did everything but practice.

He watched the walkthrough. He attended meetings. He worked with the rehabbing players on the side under the watchful eye of the athletic training staff — he looks in great shape after spending part of his time away working out in Gainesville, Fla.

Once practice started, he stood behind the play with teammates and receivers coach Adam Henry, closely monitoring the routes and going over the play calls.

He even talked to Hall of Famer Jim Brown.

Gordon returned to the Browns on Saturday after missing the first three-plus weeks of training camp to focus on his well-being. His assimilation was well under way Sunday, but no timetable had been set for participation in practice or games. He didn’t talk to reporters.

“The most important thing is let’s get him back in our building, let’s make sure everything is working great away from football, let’s make sure he gets in great shape and then let’s put him out there and go from there,” coach Hue Jackson said.

His teammates were just glad to see him again.

“It’s great. We were looking forward to it and now that it’s finally here, everybody’s excited, of course,” receiver Jarvis Landry said.

The year was 2013. Landry was a junior and in his final season at LSU. Gordon was in his second year with the Browns and engraving his name at the top of the franchise’s illustrious record book.

Landry took notice in Baton Rouge of what was happening in Cleveland.

“When you have a year, especially the one that Josh had, it brings eyes to that, it brings everybody’s to it,” Landry said. “He’s an extremely great talent in this league and he’s physically gifted and it shows. And that’s what you want to see.” 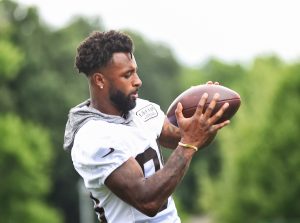 Gordon set a franchise record with 1,646 receiving yards, becoming the first Browns receiver to lead the league. He had 87 catches, an 18.9 average and nine touchdowns, earning a spot on the All-Pro team and in the Pro Bowl. He became the only player in NFL history with back-to-back 200-yard games.

More than four years have passed and Gordon has played only 10 games, due to several drug suspensions. Yet the memories and images of that season remain imprinted on the brains of the Browns and their fans. They’re why it’s been so hard for either group to let go of Gordon.

Landry wasn’t in the league yet. He hadn’t caught his 400 passes in four seasons with the Dolphins. He hadn’t been traded to the Browns, signed a five-year, $75.5 million contract or assumed the role of tone-setter and No. 1 receiver.

He said it puts into perspective how long it’s been since Gordon played more than five games in a season.

“And it’s tough, and things happen,” Landry said. “But it’s a part of his story, it’s a part of his journey. That’s what makes him even that greater, seeing how it turns out, and I’m here obviously to support him through any and everything. But obviously, man, the ability that he has is unquestioned.”

Gordon was a full participant in the offseason program before announcing days before training camp he wouldn’t attend. He raised eyebrows in the spring when he said the Browns had the most talented receiving corps in the league, and a lot happened in his absence.

Corey Coleman, the starter in place of Gordon, was dumped in a trade to Buffalo. Rookie Antonio Callaway emerged, along with Rashard Higgins and several other youngsters. Former Cowboys star Dez Bryant visited last week but didn’t sign.

A Gordon anywhere near his 2013 level — he’s only 27 years old and stronger than ever — paired with three-time Pro Bowler Landry heading into his prime at 25 would be the foundation for a formidable group.

“I’ve thought about that scenario happening at some point,” Jackson said of having his best receivers together. “Obviously it’s here now. I’ll be even more excited once that really happens. Once he’s out there playing and he’s earned the trust of his teammates, coaches and he’s out there contributing to our football team, then I’ll feel really good about it.”

“We’re really strong,” Landry said. “We challenge each other. It’s a very competitive room, but the thing that I love the most is the younger guys stepping up, making plays. Obviously Higgins, Callaway, those guys have pretty much stepped into a first-team role and they’re making plays that (other) guys weren’t, so it’s exciting.”

Sixth-round rookie Damion Ratley is part of the youth movement that has the front office and coaching staff excited. He said it’s “lovely” to have Gordon back, pointing to his experience and talent.

Ratley said Gordon’s back in his seat in the meeting rooms but didn’t formally address the team.

Landry wouldn’t say if Gordon confides in him about his off-field struggles but said Gordon knows he’s “here for him at all times.” The presence of Gordon on the field should take some of the defense’s focus off Landry.

Jackson said Saturday there’s a “chance” Gordon would be ready for Week 1 against the Steelers. Landry thinks it’s a certainty.

“Yeah, I mean, why not? He’s been training this whole time, so we expect him to be ready,” he said. “I’m sure he will be, but at the end of the day, we’re just happy to have him back.”

After big throws and impressive poise in preseason opener, Baker Mayfield looking to keep progressing Friday night vs. Bills
Austin Corbett glad to have organic chemistry in the past, focused only on football, learning left guard