Austin Corbett glad to have organic chemistry in the past, focused only on football, learning left guard 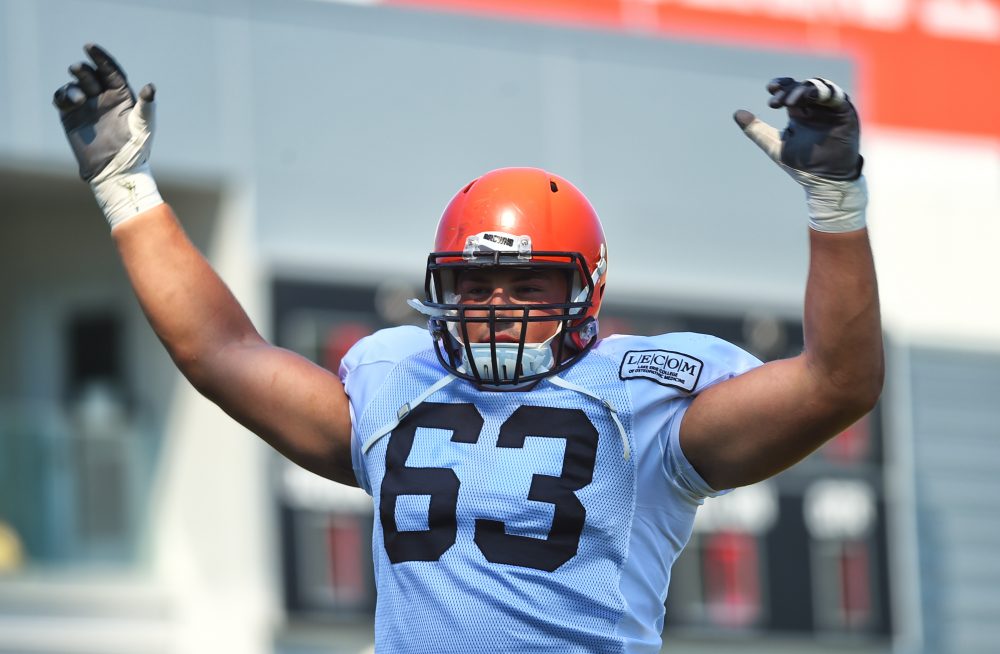 “Organic chemistry,” the Browns rookie left guard said, rattling off a course he never mastered. “I just could not grasp my mind around it. I pulled ‘B’, but it was not a fun one.”

But while chemistry got the best of him, Corbett still managed to achieve “a handful” of 4.0 grade-point averages with All-Mountain West academic honors.

Who knows, if things had gone differently, the affable 6-foot-4, 306-pounder would be in medical school studying to be an orthopedic surgeon.

Instead, he’s starting for the Browns. And passing every test.

Taken with the first pick of the second round (No. 33) in the NFL Draft, Corbett, who started 48 straight games at tackle in college, has adapted quickly since moving to guard when the Browns slid Joel Bitonio — an elite interior lineman and Corbett’s former Nevada teammate — to tackle to try and fill the massive hole left when perennial Pro Bowler Joe Thomas retired.

For Corbett, the adjustment to a new position has been helped by having Bitonio next to him.

“It’s been huge,” Corbett said following Monday’s morning walkthrough. “He’s just done so much. Anytime I have a question I’m able to ask Joel and he’s right there to give me, ‘This is what I would do. This is what I’m seeing.’ Just all the little nuances of the type of block, what footwork would be best, the hand placement, everything you could think of at the guard position.

“He’s just been there. He’s done so much. I just really can’t thank him enough.”

When training camp opened, the Browns gave Shon Coleman the first shot to start at left tackle. When that didn’t work out, it was Corbett’s turn and that didn’t go so great.

Then, after being resistant to giving the job to Bitonio, Browns coach Hue Jackson and his staff decided their best option was to put the five best offensive linemen on the field together — regardless of position.

Corbett is one of them.

The 22-year-old has had some expected struggles while learning his new position. Unlike at tackle, where it’s essential to have quickness and long arms to combat speedy pass rushers coming off the edge, guards have to rely on technique and brute strength.

“It’s a lot more physical on the inside, for sure,” Corbett said. “I remember against the Giants that was my first time going up against 350-plus (pound) guys. That’s just a lot of man, so it’s different in that sense and I like that. I like getting on guys and Joel’s kind of said the opposite, he’s like, ‘These guys are smaller out here,’ so it’s kind of been interesting to see how we are both thinking of it.”

Bitonio and Corbett both can appreciate being shifted around. Bitonio started as a right tackle at Nevada, before being moved to the left side. And Corbett has worked on both sides with the Browns before staking a spot at left guard.

Their backgrounds have bonded them as friends and in their playing styles. Some of their Browns teammates have joked they’re like twins.

“Ever since I got to Nevada, I just tried to do everything he did because he set the standard so high and even just watching him once he got here,” Corbett said.

“And so it’s kind of funny, we’ll watch film and some of our sets just look identical and in sync. He’s such a high-caliber player, and if that’s what I’m being compared to then, by all means, that’s great.”

And while it’s work, Corbett said he’s having a better time playing now than in college.

“I love it so much more as a job,” he said. “For me, I was always trying to balance the school and sport side of it where I was watching as much film as I can, but I was trying to pull a 4.0 and do so with some pretty tough classes. It was tough trying to balance it all out, but when you got football only, it’s fun.”

NOTES: RB Carlos Hyde (shoulder) and rookie CB Denzel Ward (ankle) both practiced after being held out of some drills Sunday.

… WR Josh Gordon worked with trainers on the side while awaiting clearance to return to the field. He returned to the team Saturday after a three-week absence.

… Special teams coach Amos Jones said both the kicking and punting jobs remain up for grabs.

Josh Gordon works out, closely watches practice; teammates excited to have him back, looking forward to seeing his impact on field
Baker Mayfield handling his business on and off the field, including a strong John Dorsey impression