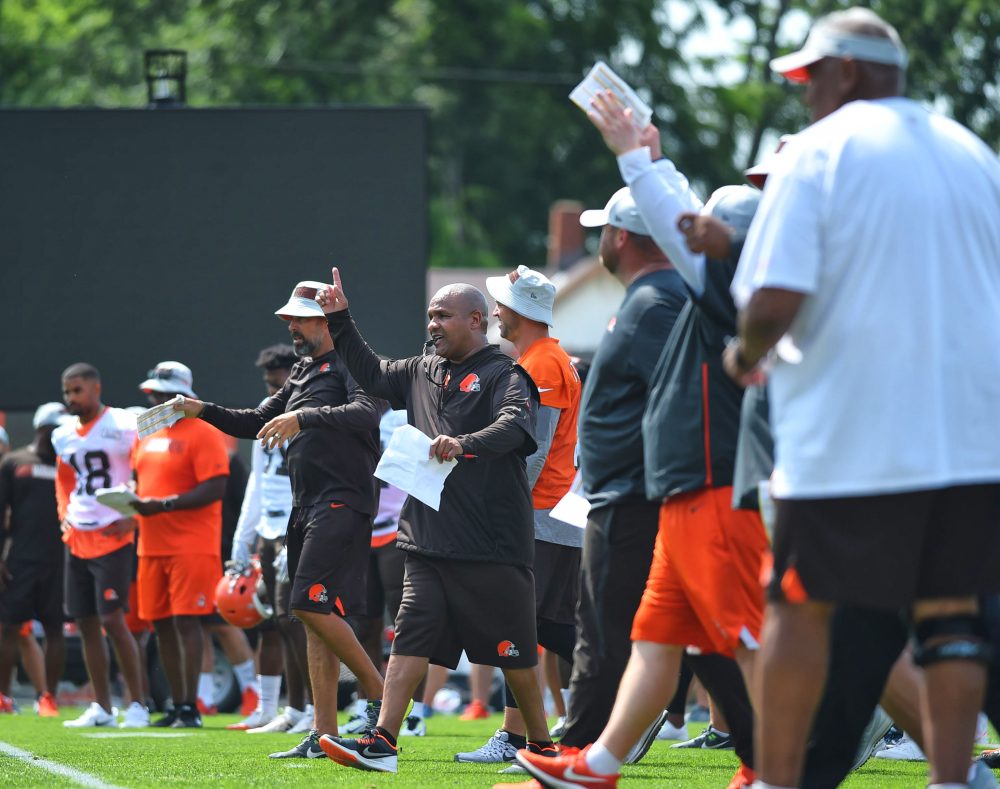 The top takeaways from the third episode of HBO’s “Hard Knocks,” which debuted Tuesday night.

“Well, Dez, I tell you this opportunity that’s sitting before you, to me, is kind of unique in a sense that we’re at a time where I think we’re about to do this (uses hand to signal rising), at a time where you could help us get this organization back to where it rightfully should be,” Jackson said. “The last two years have been hell. But it’s going to take guys like you who love to compete, who love to go in these big stadiums, it’s like, ‘We’re here, and we’re coming here to kick you’re a–.’ And that’s the kind of guys I’m looking for. I know you know Jarvis Landry. Jarvis Landry is real.”

** Bryant had told Jackson he was “just looking for realness” and said he loves “everything” about Landry. Bryant toured the building but left without signing, although the door hasn’t been closed on a deal.

“That’s what these players want. I just want that realness ’cause I’m going to give you who I am. I feel like I’m an easy person to talk to. I love learning. I want to know things.”

** Jackson put on the full-court press with one helluva prediction.

“Twenty-one days, baby, Pittsburgh Steelers, right here at home, in front of the Dawg Pound,” Jackson said. “It’ll be unbelievable. This will be the greatest turnaround in sports history.”

** The need for Bryant was lessened when receiver Josh Gordon returned after a three-week absence at the start of camp. He arrived in town while the Browns were at FirstEnergy Stadium warming up before the preseason game Friday against the Bills.

“The bird has landed,” Jackson said to offensive coordinator Todd Haley. “The bird is here. Not in here, but the bird’s here.”

“How you been doing, man?” Larry Jackson said.

“Been all right,” Gordon said.

** Defensive end Carl Nassib continued to show his sense of humor, giving Haley a hard time for making fun of the name “Carl” on a previous episode. Nassib called him “Toad” after Haley objected to Nassib calling him “bro.”

** Landry and cornerback Terrance Mitchell fought during practice after Landry grew increasingly frustrated with Mitchell. Landry threw the ball at Mitchell’s head after a play, then they wrestled.

“I told you you’re gonna stop that bulls— with me,” Landry said.

“You is not hard,” Mitchell said.

“I ain’t scared of nothing. I like being the most wanted.” – @God_Son80#HardKnocks: Training Camp with the Cleveland @Browns on @HBO pic.twitter.com/OqCaduAMjC

** Country music star Brad Paisley got a tour of the famous quarterback RV from Baker Mayfield, who said they nap in it without sheets on the mattresses.

** The world got a glimpse at interesting and funny offensive line coach Bob Wylie. When he handed over his white Maserati to a valet, he told him not to do any “Ferris Bueller” stuff.

He also talked about his disdain for stretching, pointing out that U.S. soldiers stormed the beach at Normandy and won two world wars without stretching.