Hue Jackson has “never been more confident” about team, eager to see how Browns stack up against Super Bowl champion Eagles 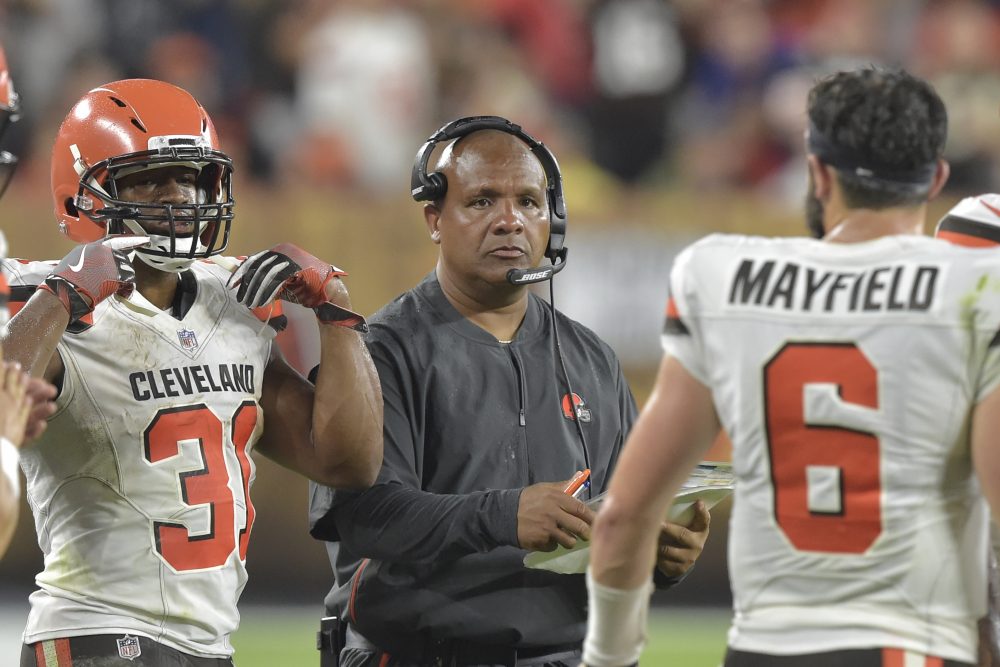 With training camp over, the preseason halfway done and the “dress rehearsal” game Thursday night against the Philadelphia Eagles, Jackson can hardly contain himself.

“Very excited. Probably more excited than I have been the first two years because I truly believe that winning is in this group, in this coaching staff, in the plan that we have laid out,” he said Tuesday. “I think that there is a chance. Now, we have to go do it. We have to coach well. We have to improve our players, and the players have to buy into what we are all selling.

“At the same time, I have never been more confident about a group having the opportunity to have success.”

Optimism is normal at this point on the NFL calendar, but the confidence emanating from the organization is noteworthy.

The Browns have won one game in two seasons under Jackson, the worst stretch for a coach in league history. Yet 1-31 hasn’t curbed his enthusiasm or stopped his players from making playoff predictions. Jackson went a step further during a sales pitch to receiver Dez Bryant last week on his free agent visit to team headquarters.

“This will be the greatest turnaround in sports history,” Jackson said, as shown on HBO’s “Hard Knocks.”

His opinion of his team won’t be defined by the performance against the Eagles in the third preseason game, but he said facing the Super Bowl champions with his starters playing a half will serve as a useful barometer.

“I just said that to the guys: ‘This Thursday, we play against the defending Super Bowl champions in our stadium. What better way to have a dress rehearsal game,’” Jackson said. “It gives us a chance to go out and measure where we are and really go play good football. I think that our guys to a man are excited about the opportunity.”

The Eagles will be without quarterback Carson Wentz, who’s still recovering from a torn anterior cruciate ligament that ended his 2017 season. Of course, the Browns traded the No. 2 pick in the 2016 draft to the Eagles, allowing them to take Wentz.

Nick Foles, who came off the bench to take the Eagles to the Super Bowl, is expected to start against the Browns after injuring his shoulder last week. The Eagles won’t have all their stars — left tackle Jason Peters and running back Darren Sproles will sit — but they have a deep and talented roster that should challenge the Browns.

No matter the outcome, Jackson feels good about his group.

“Our team is really shaped by how hard it has worked in training camp and the building blocks and the foundation that we have set,” he said. “How much has everybody truly bought in to how we go about our process of working in the classroom, working on the field, getting rest, coming back and doing it again? That is what is going to give us the jump start to get our season heading in the right direction.”

The optimism doesn’t mean Jackson’s satisfied. The Browns have committed 20 penalties for 211 yards in two games.

“We have to continue to curb that. That involves the discipline of our football team,” Jackson said. “We talk about it all of the time. We have to go do it. I am expecting our veteran players to lead that charge.”

Jackson wasn’t nearly as measured when talking to the players at halftime and after the loss to the Bills.

“I’m going to keep harping on it but the discipline of this football team has got to get better,” he said in the locker room after the game, as shown on “Hard Knocks.” “What I don’t like doing is losing when we self-inflict from penalties. From penalties. It cost you an opportunity to win a football game, and that’s just the truth.

The chances for a late comeback ended with a roughing-the-passer penalty.

“That’s what we get,” offensive coordinator Todd Haley said on the sideline. “That’s how we practice, that’s what we deserve.”

Jackson said “quite a few” questions were answered in camp, but a couple of key ones remain unresolved.

While he feels good about the reconstructed left side of the offensive line with Joel Bitonio at tackle and rookie Austin Corbett at guard, that’s not set in stone, and the backup spots seem up for grabs. The versatile Spencer Drango has been playing right guard with the first team in Kevin Zeitler’s absence and should stick, and undrafted rookie left tackle Desmond Harrison might have too much potential to make it through the waiver wire. That leaves at least one job open.

“We are still solidifying the rest of the offensive line,” Jackson said. “We know who possibly the starters will be. Who else is going to contribute there?”

A battle continues for the last receiver spot or two among Damion Ratley, Derrick Willies, Jeff Janis, Da’Mari Scott and C.J. Board. Backup defensive linemen Carl Nassib, Nate Orchard and Caleb Brantley remain on the bubble. And a spot or two could be unclaimed in the secondary.

It’d be a shock if the starters played in the finale in Detroit, so this is their last chance to take some momentum into the regular season. This is especially true for quarterback Tyrod Taylor.

He’s been good throughout camp and in the first two preseason games — 9-for-12 for 121 yards, a touchdown and a 134.4 rating — and if he exits at halftime with a lead over the Super Bowl champs, Browns fans won’t be able to wait for the opener Sept. 9 against the Steelers.

“We’ve done some things that are good in the past two preseason games, but definitely some areas that we can clean up,” Taylor said. “That’s what we aim to do, clean up those areas and take the next step and get ready for Week 1.”

Jackson couldn’t list the stars of camp without mentioning Taylor.

“I would be remiss if I did not say Tyrod Taylor and what he has done on this football team since the day that he walked in the building at practice, his leadership, how he has conducted himself here and trying to do everything he can to get this organization get to winning,” he said.

No. 1 pick Baker Mayfield will head to the bench when the season starts, so Jackson wants to see as much of him as possible in August. Mayfield will likely play the entire second half against the Eagles.

He lives for this type of opportunity.

“You love the games, don’t you? I know you do,” Jackson said to Mayfield during practice. “It’s what you do it for. You know how to do it. I’m proud of you. You’re doing some good things.

“We’re not gonna stop you from growing, bro. We’re going to keep pushing you to keep driving this team.”

Mayfield practiced Monday and Tuesday with a sleeve on his left leg. He said he’s fine and “moving around good.”

“Happy with where I am at, but not satisfied,” he said. “Always trying to get better.”