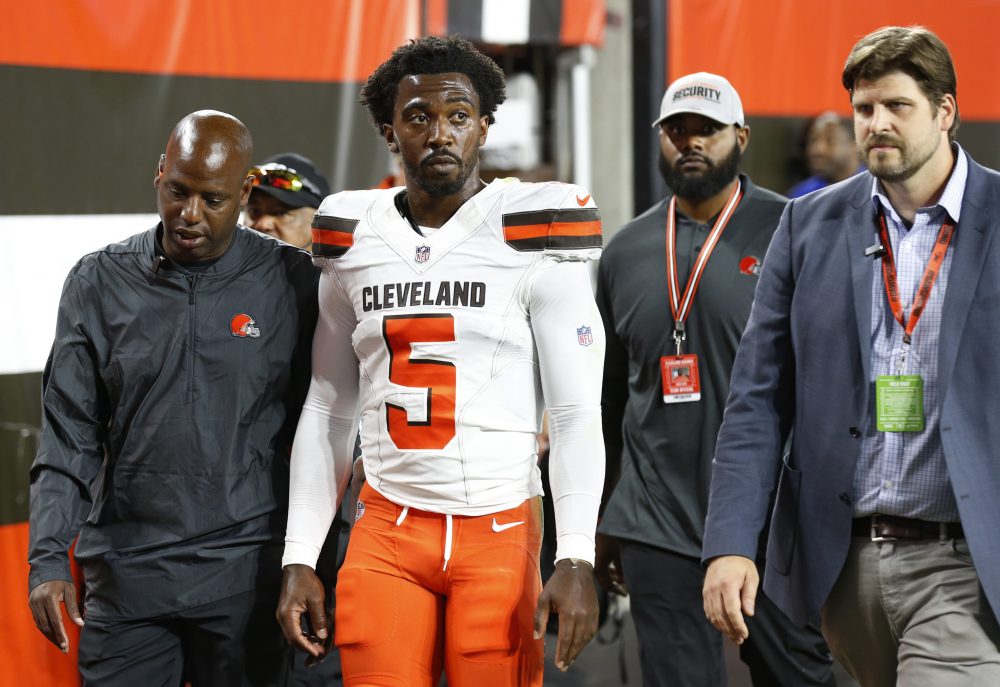 CLEVELAND — The pinkie was dislocated in one ugly motion.

It didn’t relocate as easily.

“Yeah, it wasn’t as quick as I thought it was going to be, but they got it back in,” quarterback Tyrod Taylor said Friday night at a meet and greet for fans in Ohio City. “It was tough, though, but it ended up happening. Luckily, they got it in.

“No, I wasn’t yelling. I tried to be tough about it. I tried not to look at it. I saw that it did dislocate, but I tried to look away and let him do his thing. They’re professionals.”

The worst of the pain was temporary. So was the worry.

Taylor dislocated his left pinkie finger Thursday night in a 5-0 win over the Eagles but avoided serious injury after an awkward fall in which his non-throwing hand got caught underneath him. The pinkie was popped back into place, X-rays were negative and Taylor returned to the game. 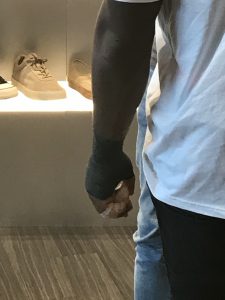 Coach Hue Jackson said earlier Friday that Taylor wasn’t expected to miss any practice time, so he’ll be in his usual spot with the first-team offense. That wasn’t a given when he squirmed in pain on the sideline after a fourth-and-goal incompletion from the 1 and knew his hand and wrist weren’t right.

He said he didn’t think about a worst-case scenario like being done for the season. He just prayed.

Taylor and the team breathed sighs of relief when he was able to return to the huddle after missing two series. He finished the first half.

“It was definitely scary, but it’s part of the game. You can’t control those type things,” Taylor said. “Of course, in a perfect world try to get my hand from under me, but luckily it wasn’t worse than what it was. I was able to get back out there and compete with the guys and that’s what I love doing is competing.”

Taylor has established himself as the team leader in his first season with the Browns. Once he was told there wasn’t structural damage, he knew he could handle the pain and wanted to play.

Once Jackson got word from the medical staff Taylor was cleared to play, he didn’t hesitate to send him back in.

“I felt he needed to, because our offensive football team at that time needed to play together,” Jackson said. “They needed his leadership. He needed to be out there playing with them. I think it is important for them to develop that chemistry, so I felt comfortable that when we put him back out there, things were OK.

“Obviously when he was not there and he was (in the locker room) before he came back, all kinds of thoughts go through your head. But I feel good about where he is and what he will be able to do in the future.”

Taylor has been cemented as the starter ahead of No. 1 pick Baker Mayfield and will keep that role. In three preseason games, Taylor is 20-for-28 (71.4 percent) for 186 yards, a touchdown, two sacks and a 101.2 rating.

Jackson said he’ll decide if the starting offense needs to play in the preseason finale against the Lions on Thursday after evaluating it in practice this week.

Taylor will go along with whatever Jackson decides but has already turned his focus to the regular-season opener Sept. 9 against the Steelers.

“I think at this time learn from the things that we did in preseason up to this far and get ready for Pittsburgh,” he said. “If it’s the coaches’ plan to do otherwise, then I’m all for it.

“Ultimately whether it’s with playing in this game or not, you still have practice time, there are still areas to get better and continue to keep molding this team and get ready for Week 1.”

Taylor played a total of 11 series in the three games. He feels the starters accomplished enough.

“We did a bunch of good things, there’s a lot to build off of and I think guys are in a good space mentally to continue to keep building off of that and carry it into the season,” he said.