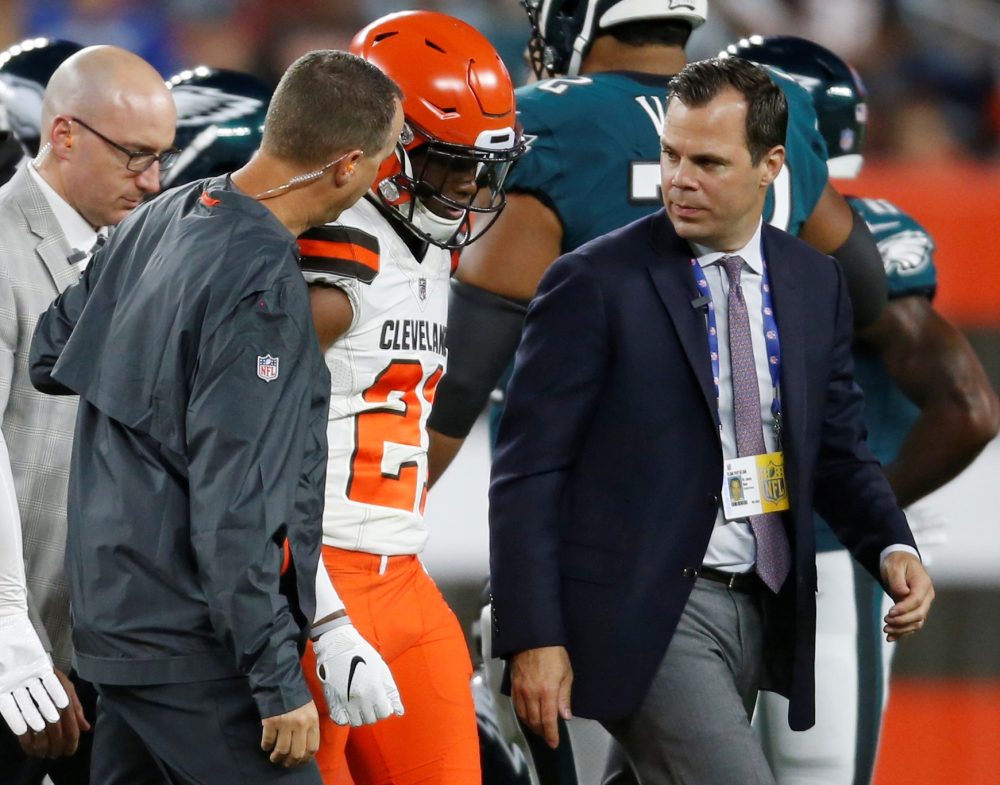 The No. 4 pick in April was back at practice Saturday after leaving the preseason game against the Eagles on Thursday night with back spasms and not returning.

The injury looked like it could’ve been serious. His neck bent and body twisted as he tried to tackle 250-pound tight end Zach Ertz, then he quickly grabbed his lower back.

“It was spasms in his back. I would suspect that he would be out there today,” he said.

On Friday, Jackson said he’s been impressed with Ward’s ability and toughness but wants to see greater durability.

“I feel very good about him,” Jackson said. “Obviously he has the physical skill set that we want and I think he is tough. He will tackle, he will do all of those things.

“What he has got to do is be able to make it through 16 games. Hopefully we can earn another game and other games after that. The thing with him will be durability. He is going to have to be out there on the field competing and playing, because when he is out there, it makes us a better football team.”

Ward (5-foot-11, 190 pounds) has been the No. 1 cornerback since the spring but missed part of rookie minicamp with a hip injury and was slowed by an ankle injury in training camp.

Jackson is confident Ward will be ready for the opener Sept. 9 against the Steelers.

“No doubt. He should be there,” he said.

Right guard Kevin Zeitler (calf) returned to practice after getting hurt Aug. 1. He missed the first three preseason games and should be a boost to a line that’s been uneven in the preseason.

Zeitler is in his seventh year but Jackson wants him to play Thursday in the preseason finale at Detroit.

“I would like to get him in a game before we play (in the regular season), but let’s see where he is,” he said.

** Rookie receiver Antonio Callaway (groin) was back after not practicing Monday and Tuesday and sitting out the Eagles game.

** Tight end David Njoku (ankle) and defensive tackle Larry Ogunjobi (shoulder) didn’t practice and worked on the side with the athletic training staff. They played against the Eagles and Jackson said they’re fine.

** Free safety Damarious Randall (knee) didn’t practice. He was a late scratch Thursday after his knee “locked up” in pregame.

As promised, quarterback Tyrod Taylor practiced after dislocating his left pinkie finger in the first quarter. The hand and wrist were wrapped.

“He did everything that he needed to do today,” Jackson said.

Taylor’s finger was popped back into place and he returned to the game after missing two series. He continued to show his toughness by not missing any practice time.

“That is awesome,” Jackson said. “That is the way your quarterback has got to go about it. He is a tremendous competitor, an awesome leader.”

DeValve is in jeopardy of losing a roster spot that seemed secured at the start of camp. The fourth-round pick in 2016 has missed nearly all of camp with a quadriceps injury and hasn’t played in the preseason. He caught 33 passes for 395 yards and a touchdown last season.

“Obviously, we know Seth is a good football player and he can play. We just have to get him healthy,” Jackson said. “His health has been an issue. He has had to work through it. It is tough.

“How it is going to unfold at the end, we are going to keep the best 53 guys that we can. However that shakes out, if he is part of that, great. If he is not, it means we found somebody better.”

** Incumbent Britton Colquitt seems to have taken a leg up in the punter battle.

“I feel good about what he is doing and what he has done,” Jackson said.

** Jackson doesn’t have final say but would like to keep six receivers on the 53-man roster.

Jarvis Landry, Josh Gordon, Callaway and Rashard Higgins seem like locks and rookie Damion Ratley is close. That would leave one open spot.

A REASON TO WATCH

“I definitely want to see Baker play,” Jackson said of the finale. “There is value in seeing Mayfield play.”

Jackson said he hadn’t decided if he’ll play the starters against the Lions, so Mayfield could get the start. How much he plays is yet to be determined.

“I have seen quite a bit of him,” Jackson said. “I like what I have seen. He has done a good job.”