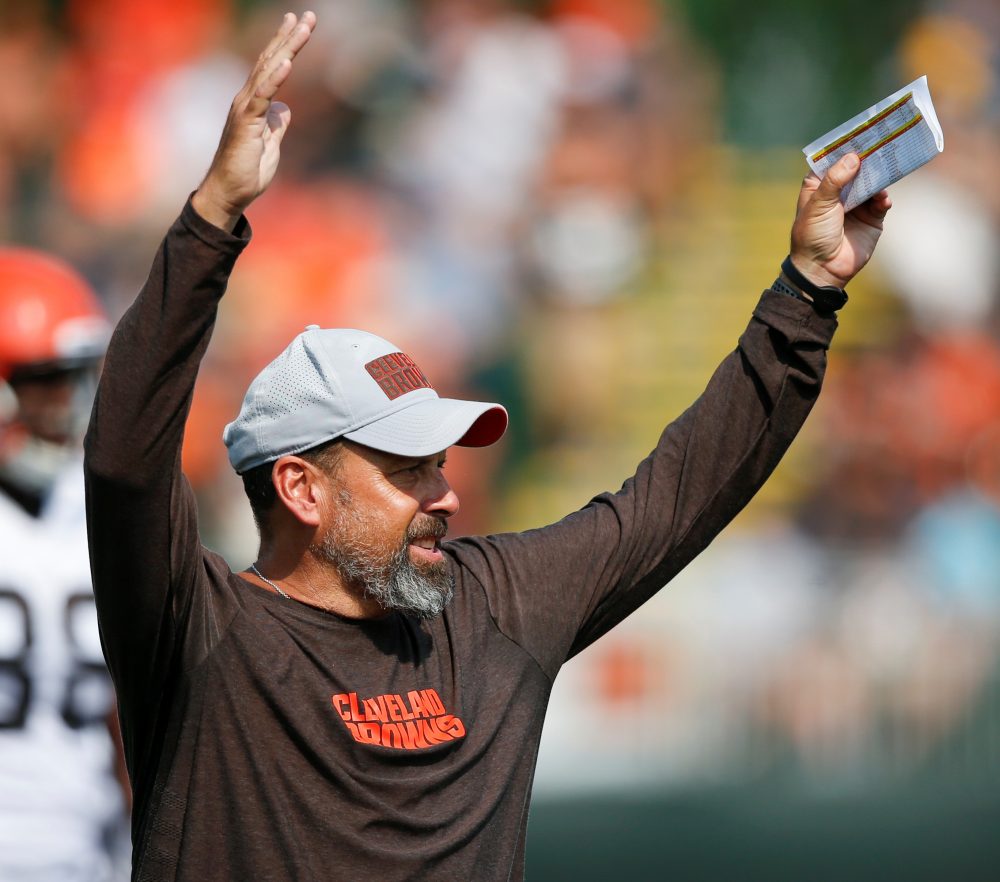 The top takeaways from the fourth episode of HBO’s “Hard Knocks,” which debuted Tuesday night. The final show is next week.

Offensive coordinator Todd Haley continued to be one of the most captivating figures in the series, and the most interesting section of this episode was a back-and-forth between him and receiver Jarvis Landry.

Landry didn’t get to the corner of the end zone on a pair of routes from the 1-yard line and wanted penalties called on the defense. Haley wanted better effort.

“You can’t count on a flag, though,” Haley said. “You’ve got to keep fighting you’re a– off to run to that pylon. He threw two of them. Just run. I know he’s holding you but run.”

** Haley wasn’t done yelling. Landry quit running on a deep route down the sideline on a ball that landed out of bounds.

“What the f— you talking about? The ball was out of bounds!” Landry shot back.

“Catch the ball and make a play, please. That looks like Friday bulls—,” Haley said.

Haley turned to receivers coach Adam Henry and told him to get on Landry.

** In a previous episode Haley implored Landry to become a mentor for rookie Antonio Callaway. In this show, after Derrick Willies didn’t run hard on a go route, Haley continued to urge Landry to be a role model for the young receivers.

Haley ended the rant with a hug.

** Receiver Josh Gordon, whom general manager John Dorsey and coach Hue Jackson referred to as “Fish,” sat at his locker upon his return and scrolled through the playbook on a tablet.

“Not too many new plays, which works good for me,” he told a teammate. “I pretty much know all of these, so I’m straight. They might as well let me practice today, give you all a break.

“I can’t wait to get back out there.”

** Gordon didn’t play against the Eagles, so he gave his gloves to a couple of kids in the stands.

“I almost forgot how nice of a stadium it is,” he said.

He later talked to Fox reporter Kristina Pink on the field during warmups.

She told him that Jackson said he wouldn’t start right away.

“It makes sense. You definitely don’t want to come from a place of entitlement, and that’s not where I’m coming from,” Gordon said. “I think anybody should have to step in and earn the right to play football in the National Football League. That doesn’t put me beyond that. I’m not above reproach in any type of way.”

** Pink asked Gordon if he had a message for everyone after coming back from three-plus weeks away at the start of training camp to focus on his sobriety and mental health.

** Quarterback Tyrod Taylor was in serious pain after his left pinkie finger dislocated against the Eagles.

“Oh, my gosh. I can’t feel it,” he told the medical staff about his hand, groaning and grunting.

When he got the news the X-rays were negative and nothing was broken, Taylor didn’t hesitate.

** The annual rookie show was a series of videos making fun of coaches and teammates for their previous appearances on “Hard Knocks.” They were hysterical, including receiver Blake Jackson living out Landry’s famous speech from the premiere and quarterback Baker Mayfield’s imitation of Dorsey.

“That was one of the best ever. You guys did a helluva job,” Jackson said.

** No one should doubt defensive end Nate Orchard is in danger of getting cut.

“You all right, Nate? You praying? You might need to,” Jackson said as he walked by Orchard stretching.

“Since when does the NFL have a drum line?” he asked in the huddle during the Eagles game. Lineman Spencer Drango told him it’s always there and that there aren’t cheerleaders. “Oh, s—, all right.”

** Tight end Devon Cajuste believes in the power of crystals and stones.

Hue Jackson has “never been more confident” about team, eager to see how Browns stack up against Super Bowl champion Eagles
Predicting the roster: Tough choices on the offensive and defensive lines