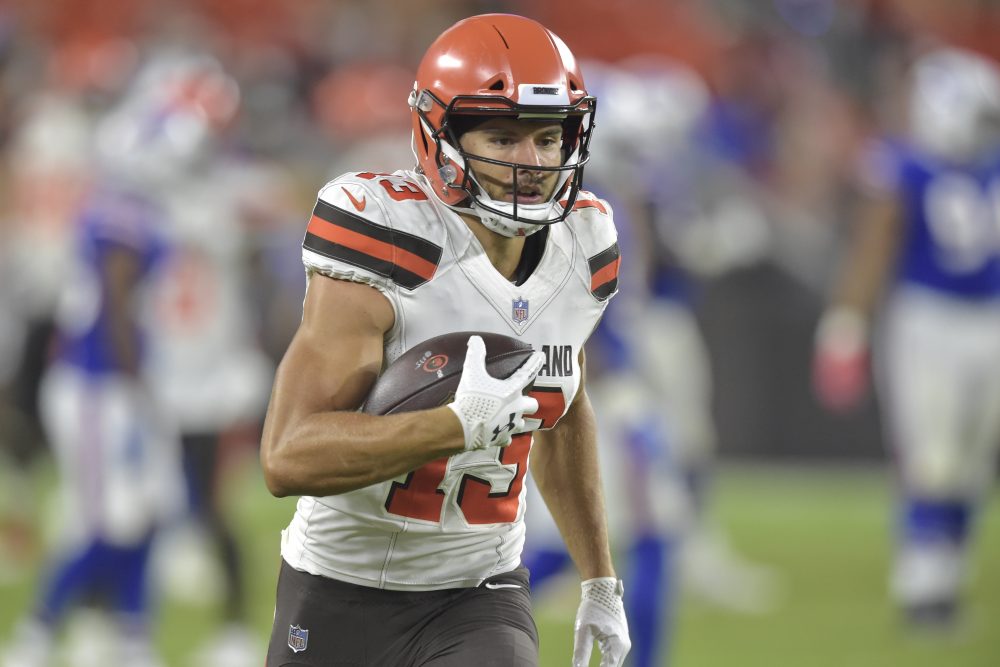 Coach Hue Jackson used part of his postgame speech Thursday night in Detroit to thank the players for their work during training camp. Everyone knew what was coming next.

General manager John Dorsey made 14 cuts, trimming the roster to 72. He then traded disappointing offensive tackle Shon Coleman to the 49ers for a seventh-round draft pick next year, pending a physical.

The deadline to get down to the 53-man limit is Saturday at 4 p.m.

Receiver Jeff Janis was the most noteworthy cut, as his contract was terminated. He was signed as an unrestricted free agent in March after spending four years with the Packers and was expected to be a core special teamer and backup receiver.

He struggled through training camp and the preseason and was passed on the depth chart by younger receiving options.

Safeties Derron Smith and Elijah Campbell, fourth-string quarterback and “Hard Knocks” star Brogan Roback, linebacker Justin Currie and receiver C.J. Board were waived. Currie and Board were waived with an injury designation after getting hurt in the preseason finale against the Lions.

Coleman, a third-round pick in 2016, started 16 games at right tackle last season, then opened camp this year as the first-team left tackle. He was quickly demoted, wound up on the third team and would’ve been waived.

Dorsey has final say over the roster and is working with Jackson and his staff for the first time. Jackson raved about the relationship and process.

“John has done a great job that way of really talking through things,” Jackson said. “I’m that way, and so I think the relationship piece of it, of them understanding what the coaches need and the coaches understanding how the personnel sees it is so, so important and that’s how you get some collaborativeness, we work together and get some same ideas, some like ideas.”

Jackson said there were “definitely” players who earned roster spots with their play in the 35-17 win over the Lions. He wouldn’t name names, declining to answer if that included defensive end Nate Orchard, who returned an interception 64 yards for a touchdown.

Injuries could play a role in the moves Saturday. Fullback Danny Vitale (calf) and backup tight end Seth DeValve (quadriceps) have been unable to practice and play, and the Browns may not have the luxury of keeping them.

“Those are tough decisions because we’ve got to do what we think’s best short term and long term for the organization and those guys have been players who have played football here and contributed,” Jackson said. “But obviously they have not been out there on the field with the team and able to practice, so I think availability is really important, especially as we start heading into the season.”

Could the roster changes over the weekend include a significant addition? With the Raiders reportedly having received trade offers for defensive end Khalil Mack, who’s embroiled in an acrimonious contract holdout, Jackson was asked if the Browns could add any big-name players.

“Oh, like a splash or something like that?” he said. “It’d be hard for us to do. But nothing is out of the question. I think nothing is off the table. I think we’ll definitely look at everything, and if we think it fits for our organization and football team, we’ll certainly do it.”

A trade for Mack would require a massive commitment, possibly including two first-round draft picks followed by a contract extension worth more than $20 million a season. The Browns have the assets and salary cap space to pull it off and Dorsey has been aggressive in rebuilding the roster, but a lot of hurdles would have to be cleared.

Mack has made the Pro Bowl three times in four years and was Defensive Player of the Year in 2016. He has 40.5 career sacks.

Receiver Josh Gordon will finally practice Monday when the team reconvenes, Jackson said. The goal is to get him ready to play a role off the bench against the Steelers.

“I think it’ll be a little bit more than limited but not totally, totally full go,” Jackson said of the plan for Gordon’s return to practice. “But he’ll definitely get into the route-running part of it and catching balls and being with the offense a lot more than what he has been.”

Gordon missed the first three-plus weeks of training camp to deal with his sobriety and mental health, then experienced tightness in his hamstring that kept him out of practice this week. He’s been participating in walkthroughs and catching some passes.

Running back Matthew Dayes limped off the field Thursday night with an ankle injury but Jackson didn’t think it was serious.

Dayes is in the mix for one of the final roster spots.

** Free safety Damarious Randall (knee) will practice Monday, Jackson said. Randall didn’t play against the Eagles on Aug. 23 after his knee “locked up,” then missed three days of practice and got a second opinion.

Notes: Free safety Damarious Randall back and ready to go after getting second opinion on knee
Notes: Josh Gordon practices for first time, looks good, on track to face Steelers on Sunday