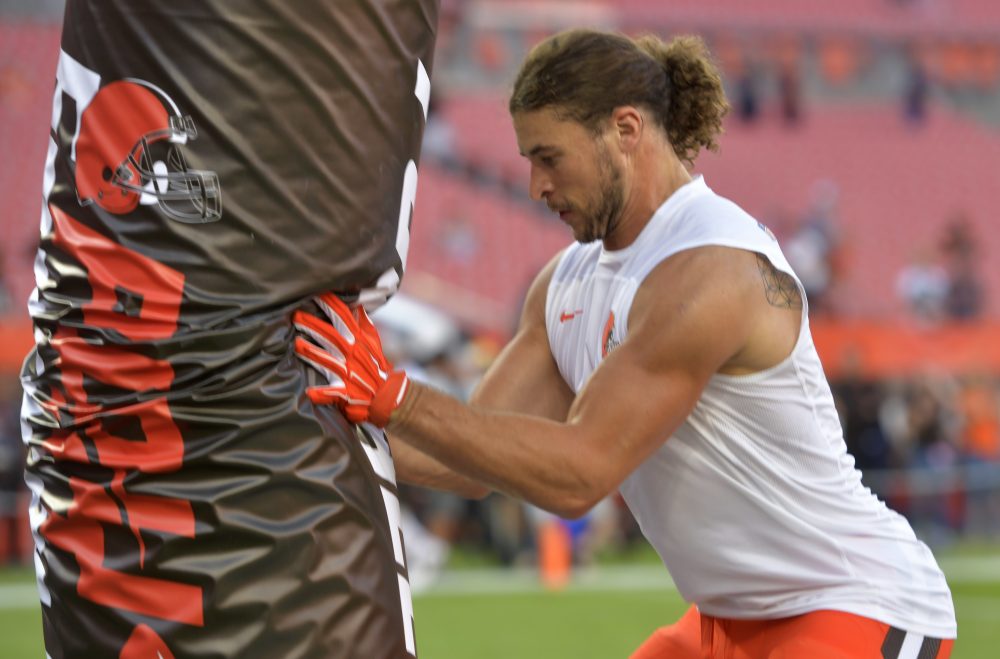 HBO’s “Hard Knocks” has featured the pair and their fight to make the team, but they were waived Saturday as the Browns trimmed the roster to the regular-season limit of 53.

Orchard, a second-round pick in 2015, made the play of the preseason in the finale Thursday with a 64-yard interception return for a touchdown but lost out to fellow “Hard Knocks” star Carl Nassib, free agent signee Chris Smith and rookie third-round pick Chad Thomas as five defensive ends made the initial 53-man roster.

The long-haired, crystal-toting and -touting, energized-by-the-moon Cajuste built quite the following after his all-out effort and heartwarming relationship with his father drew the spotlight of “Hard Knocks.” But he struggled with blocking and was inconsistent catching and isn’t expected to be brought back on the practice squad.

The Browns kept four tight ends, including Seth DeValve and Orson Charles, and no fullbacks after releasing Danny Vitale (calf) with an injury designation.

The Browns have first priority on the waiver wire after going 0-16, so a handful of additional moves are likely Sunday. General manager John Dorsey and coach Hue Jackson are expected to comment once the roster is set.

The other notable cuts were offensive lineman Spencer Drango, running back Matthew Dayes, defensive tackle Caleb Brantley and cornerback Mike Jordan, all of whom filled roles for the Browns last season. Dorsey kept 25 holdovers from last year and 28 players he acquired.

Drango filled in for starting right guard Kevin Zeitler and played a ton in the preseason but lost his spot when Earl Watford was signed Tuesday. Dayes played an important role on special teams and had a strong finale, including a 42-yard touchdown run, but the Browns went with only three running backs.

Sixth-round rookie cornerback Simeon Thomas was also waived but could return on the 10-man practice squad if he isn’t claimed by another team.

Dorsey and the personnel staff had a busy day, including acquiring defensive tackle Devaroe Lawrence from the Saints for a seventh-round draft pick in 2019. Lawrence (6-foot-2, 294 pounds) was undrafted out of Auburn in 2017 after a torn anterior cruciate ligament. He was signed by the Saints, had another knee surgery and didn’t play last season. He had two sacks against the Jaguars in a game this preseason.

Incumbent Britton Colquitt won the punter job with the release of Justin Vogel.

“Thank you God, without you none of this is possible!” McKinnon tweeted.

“they said bet on yourself and double down!” Willies tweeted.

Cut day is always newsworthy but the moves would’ve been dwarfed if the Browns had pulled off a trade for defensive end Khalil Mack. They talked to the Raiders about a deal, but the Bears acquired the three-time Pro Bowler and 2016 Defensive Player of the Year. Chicago got Mack, a 2020 second-round pick and a conditional 2020 fifth-rounder in exchange for first-round picks in 2019 and ’20, a third-rounder in ’20 and a sixth-rounder next year.

The Browns didn’t land Mack but they will avoid him. They travel to Oakland in Week 4 and could see a team still reeling from the blockbuster move that had Raiders players tweeting “No way.”

A cut in Buffalo had to make the Browns feel smart, or at least vindicated.

Receiver Corey Coleman, the No. 15 pick in 2016 who was traded to the Bills on Aug. 5, was waived. The Browns saved themselves his $3.5 million salary and got a seventh-round pick in 2020, while the Bills had him for 26 days of the preseason.

Colquitt kept the punting job with a good preseason — 15 punts, 41.2 average, five inside the 20 — coming off knee surgery in the spring. He set franchise records the last two years in net average, 40.6 last season, and had a career-high 47.6 gross last year.

Hue Jackson considering another shake-up to left side of offensive line that could include undrafted rookie Desmond Harrison at tackle
Browns cut Jamie Meder and Carl Nassib, claim 5 off waivers; 31 players on 53-man roster new since last year