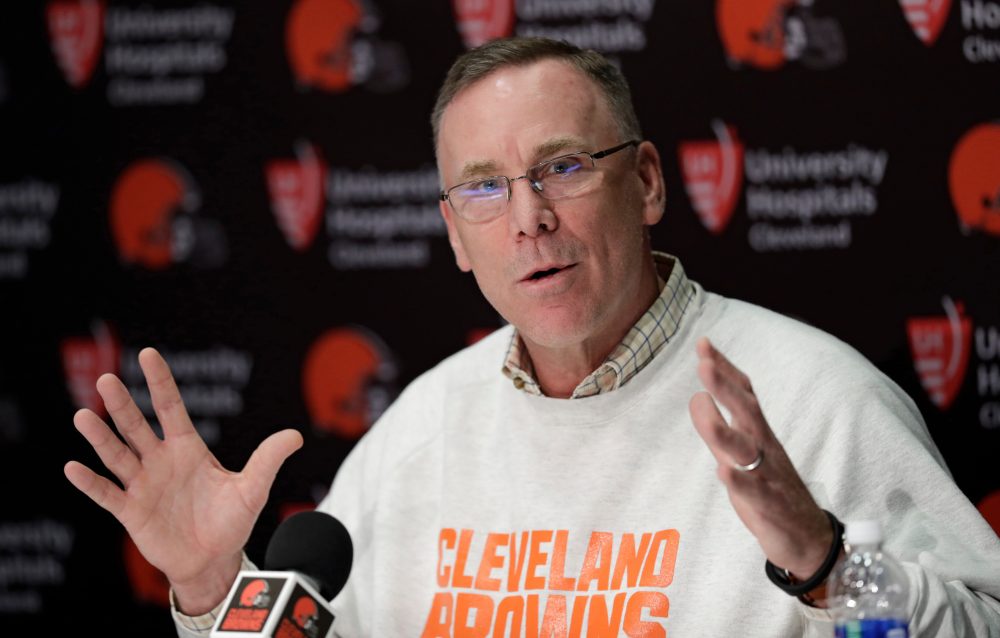 Carl Nassib will get the chance to pass along his investment tips to a new group of teammates.

Jamie Meder, the “Pierogi Prince of Parma Heights,” will have to take his polka music on the road.

He claimed linebacker Tanner Vallejo from the Bills, defensive back Tavierre Thomas from the Cardinals, nose tackle Carl Davis from the Ravens, defensive end Ifeadi Odenigbo from the Vikings and center Aaron Neary from the Rams.

Nassib, the No. 65 pick in 2016, showed his funny and kooky sides during HBO’s “Hard Knocks,” including a profanity-laced speech to the defensive line room about wise investment practices. 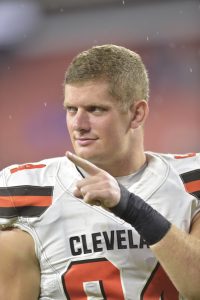 Browns defensive end Carl Nassib walks on the sideline during a preseason game. He was cut Sunday.
AP

His departure appeared to draw a reaction from teammates on social media.

End Myles Garrett replied with a meme of Michael Jordan shaking his head.

Meder, who went to Valley Forge High School, joined the team at the end of the 2014 season and has been solid in the middle of the tranches. He started 16 of 43 games and blocked the field goal that ensured the 2016 Christmas Eve victory over the Chargers, the lone win in coach Hue Jackson’s two years.

Larry Ogunjobi will join Trevon Coley as the starting tackles.

“We were able to again add some more talent to our team, and in the process of doing that, there are some players that have been here that we had to let go,” Jackson said in the news release announcing the moves. ”That is always tough to do, but at the end of the day our No. 1 job is to make the football team the best that we can make it and to give our fans what they truly deserve, which is a winner.”

Dorsey replaced Sashi Brown in December and has overhauled the roster. Of the 53 players to make the team, 31 are new since the end of last season.

“That does not happen unless you have a plan,” Dorsey said. “That plan was developed in mid-January with the input of the coaches and the personnel staff putting this thing together. Once we identified what we needed, we used whatever resources that were available. Of course, when you are sitting in the No. 1 waiver claim position, you always go attack the final two or three claims and see what is out there. We thought that it would be best if we picked up five players who we think could help this team.

“At the end of the day, I think that we are a better football team on both sides of the line of scrimmage. I think that our skill groups have a lot of young and upcoming guys. That is all that you can ask for.”

Odenigbo (6-foot-3, 275 pounds) was a seventh-round pick of the Vikings in 2017 and didn’t play last season. He was first-team All-Big Ten for Northwestern, leading the conference with 10 sacks in 2016.

The two changes on the defensive line give the Browns five new members of the nine-man group. The only holdovers from last year are Garrett, Ogbah, Coley and Ogunjobi — the four starters.

Injuries to fullback Danny Vitale (calf) and tight end Seth DeValve (quadriceps) made the roster decisions more difficult. Vitale was waived with an injury designation and DeValve was kept despite missing the entire preseason. Tight end Orson Charles made the team and can fill in at fullback.

“Orson Charles has been a really good find for us thus far but we will keep exploring that position,” Jackson said. “We want to get Seth back up and on the field playing.”

Rookie cornerback Simeon Thomas, a sixth-round pick, was claimed by Seattle. He was the only of Dorsey’s nine draft picks to get cut.

The practice squad will be announced Monday.

Dorsey echoed Jackson’s comments from Friday that the personnel and coaching staffs have worked well together in their first try.

“There is mutual respect between the coaches, the personnel and the research staff,” Dorsey said. “What you have now is that you are becoming a well-oiled machine because everybody understands the vision, the coaching staff is going to coach up the players that we acquire for this team.

“At the end of the day, I think that it is a good day to be a Cleveland Brown.”