Josh Gordon says beating Steelers in opener would be “almost a Super Bowl win,” chances to do so “higher than they’ve ever been” 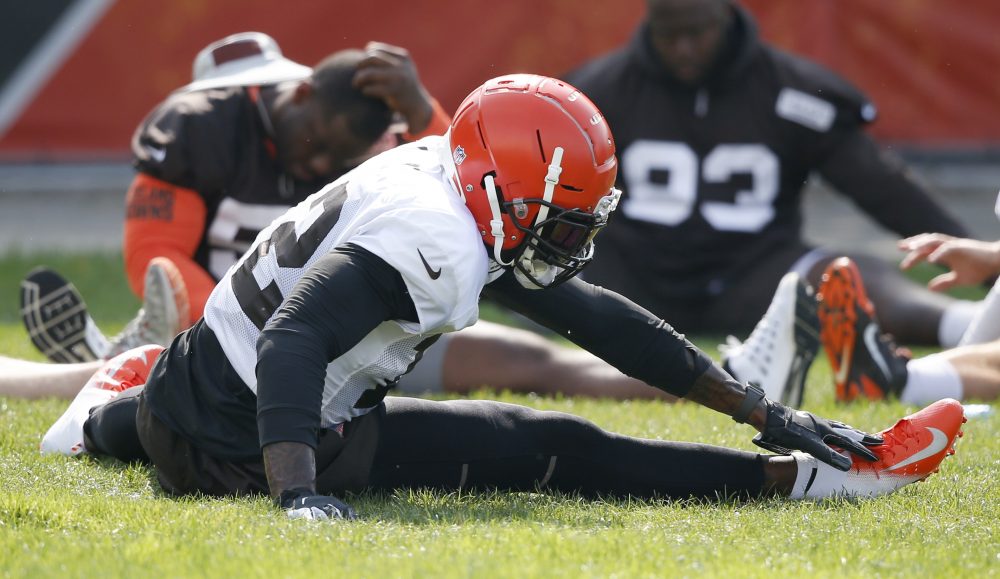 BEREA — The opener. At home. Against the Steelers. With the chance to put 0-16 to bed and begin carving a new identity for the organization.

Receiver Josh Gordon has been around long enough to know that any Browns win against the Steelers is special. A victory Sunday would reach another level.

“That’s the equivalent of making the playoffs here, almost a Super Bowl win,” Gordon said Wednesday. “It’s something we’ve been wanting for a long time.”

“Our chances are higher than they’ve ever been to get a win this Sunday,” he said. “It’s the biggest rivalry we have. It’s one of the toughest competitions in the league, so we know what we’re up against.

“It’s going to be a hard-fought battle. That’s the most I can predict on it, honestly.”

The regular-season atmosphere finally arrived and the energy and enthusiasm were palpable. The players practiced in pads and talked effusively about starting the year in a positive way and the impact it would have.

“It’d be an eye-opener for the rest of the league,” defensive end Myles Garrett said. “And I feel like it would get the momentum going, and guys would really see what we’ve been doing and what we’re doing is fruitful.”

Garrett’s target will be quarterback Ben Roethlisberger, who’s 21-2 against Cleveland. His counterpart, Tyrod Taylor, will make his first start for the Browns after being acquired in a trade in March and voted captain Wednesday.

Gordon’s mere availability would be a boost, but his expectations are much greater, despite practicing Monday for the first time since minicamp in June. He was listed as limited on the injury report after tweaking his hamstring a couple of weeks ago but said he’s 100 percent.

Coach Hue Jackson said Gordon hasn’t earned the right to start after missing the first three-plus weeks of training camp to work on his sobriety and mental health.

“I am not about entitlement for players. I am about work,” he said. “This is just our rule. Guys that have been here and put in the most time, they are going to get the first opportunity to go out there. That is the way that it should be done.”

Gordon said he isn’t bothered by coming off the bench and believes he can still have a big impact against the Steelers.

“I know given the opportunity, I’m going to try to maximize it,” he said.

His coach and quarterback expect the same.

“He can have a huge impact if he plays the way that we know he can,” Jackson said, adding Gordon will be on a “pitch count. “Obviously, the guy can run and catch and jump and do all of those things.”

“He is a playmaker, a very big playmaker at that,” Taylor said. “It does not take many balls to touch his hand for him to make big plays. When the opportunity presents itself, definitely have to give him chances to go out there and make plays and put up points for this team.”

Gordon has the only back-to-back 200-yard receiving games in NFL history, and the first came against the Steelers in 2013, when he caught 14 passes for 237 yards and a touchdown in a 27-11 loss. Despite not playing in the preseason, he said he’s as locked in as he’s ever been.

“Just having a healthy balance of things inside of here, knowing what I do here and off the field, knowing what I want to gain from it,” he said. “Prioritizing that over everything else kind of takes care of itself and it feels good — real good.”

He said the return to practice was “awesome” and “really fun,” he knows the playbook, doesn’t feel any rust and has maintained chemistry with Taylor despite the time away.

“I got a real good feel for where he likes to put the ball on certain routes and I think he’s got a feel for the range of my speed and where he can anticipate me to be,” Gordon said. “So it’s really picking up, I feel like, exactly where we left off. It seems as though there’s no hitch in it at all.”

Gordon has embraced a fresh start as he prepares to play an opener for the first time since he was a rookie in 2012. That was the only time he played 16 games.

He said the “clean slate” also applies to the team coming off 0-16.

“A bunch of these guys weren’t here prior to, and it doesn’t even resonate with them what happened and what is going on here, so I think it’s a good thing,” Gordon said. “I think they’re absent-minded about it, and it’s a great place for them to be. The guys that were here, we need to get to that as quickly as possible if anybody’s having any type of feelings about what’s happened in the past because it’s over.

“We’re here today, and that’s why the season ends and it starts again, and anybody has a chance right now to make it to the Super Bowl.”

After comparing a potential win over the Steelers to making the playoffs, Gordon said he didn’t have the words to describe what playing in the rivalry feels like.

“There’s no way to put that on somebody and try to paint that picture until you get in the game and get a chance to feel that environment,” he said. “Then you really grasp the concept and the level of which this rivalry goes to. They’re going to have to experience it.”

Chris Hubbard ready for starting role, has been thinking about matchup with Steelers — his former team — for a long time
Browns 2018 Preview: Q&A with Jabrill Peppers